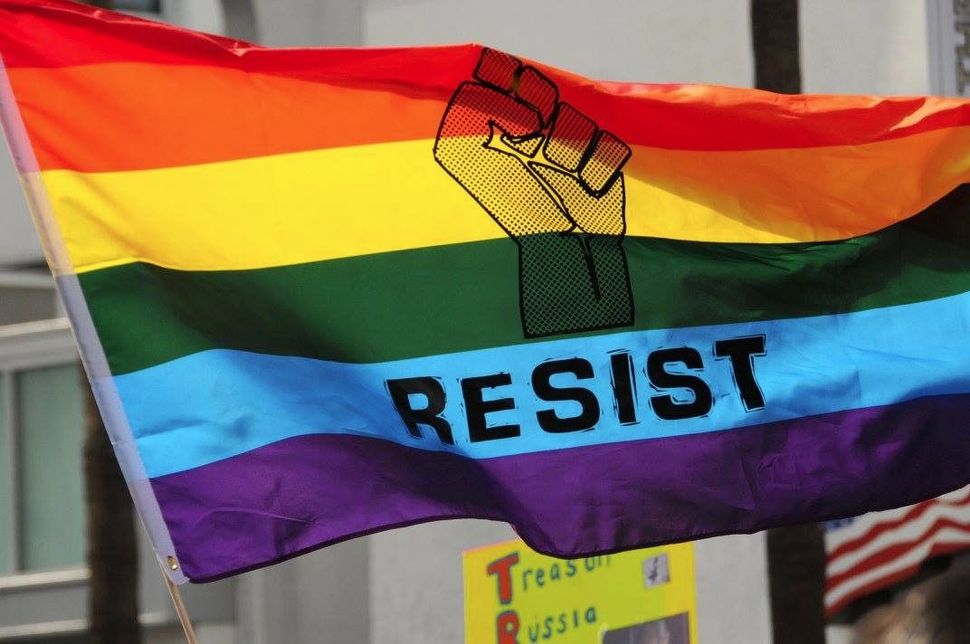 Congregation Beit Simchat Torah, the iconic Manhattan LGBTQ synagogue, instructed marchers joining it June 25 in the New York Pride Parade to avoid wearing clothing or carrying signs relating to the Jewish state or the Palestinians, the Forward has learned.

A CBST rabbi asked in an email for the groups to ensure that their marchers “focus on resistance” to President Trump and not bring “messaging… comprising words, symbols and signage… about Israel/Palestine.”

“We were trying to say the debate about Israel and Palestine is not located in this event,” said Sharon Kleinbaum, the senior rabbi of CBST. She emphasized that the email applied to Palestine imagery and signage as well.

The email, which is the latest example of conflicts over Israel roiling the wider progressive movement, pleaded for gay and lesbian unity and urged marchers not to engage in “debate with spectators or each other” about Israel.

“What I wanted was to make sure we had the positive focus on Trump,” Kleinbaum said. “I wanted to make sure we stayed focused on our domestic agenda of protecting democracy in this country.”

The call did not sit well with some LGBTQ Jews, who object to being told when and how to express their opinions about the Middle East conflict or the Jewish state.

“Exclusion has no place in pride,” said Mordechai Levovitz, co-executive director of Jewish Queer Youth. “We’re there to include all views and make sure all people feel that they belong.”

Other leaders agreed with CBST’s rule, although some were uncomfortable with the tacit recognition of the highly controversial place that Israel occupies among left-wing activists in the LGBTQ community.

“It left a sad taste in my mouth that… politics around Israel have become so viciously polarizing,” says Idit Klein, executive director of the Jewish LGBTQ organization Keshet. But, she added, “I think there was absolute rationality to it.”

Israel politics has undeniably become a flashpoint in recent months, especially during this month’s Pride celebrations, the marquee event of gay political and cultural expression.

At the Celebrate Israel parade, held in New York on June 4, members of Jewish Voice for Peace, which fiercely opposes Israel’s occupation of Palestinian lands, were arrested after they briefly infiltrated and disrupted the parade’s LGBTQ contingent. On Saturday, June 24, two women carrying flags emblazoned with Stars of David were asked to leave the Chicago Dyke March.

CBST, which marched with the Progressive Coalition at this month’s Celebrate Israel parade, has long been known for balancing support and criticism of Israel. Kleinbaum, the senior rabbi at CBST, famously included the names of both Israeli and Palestinian children in her services during the 2014 conflict between Israel and Gaza.

CBST decided earlier this year to march in the parade’s Resistance Contingent, which consisted of 17 other groups that used their lead-off place in the parade to voice opposition to the Trump administration, including its positions on immigration policy and on police shootings of minorities. (Other organizations that participated in the Resistance Contingent were not asked to forgo imagery and signage from other countries.) 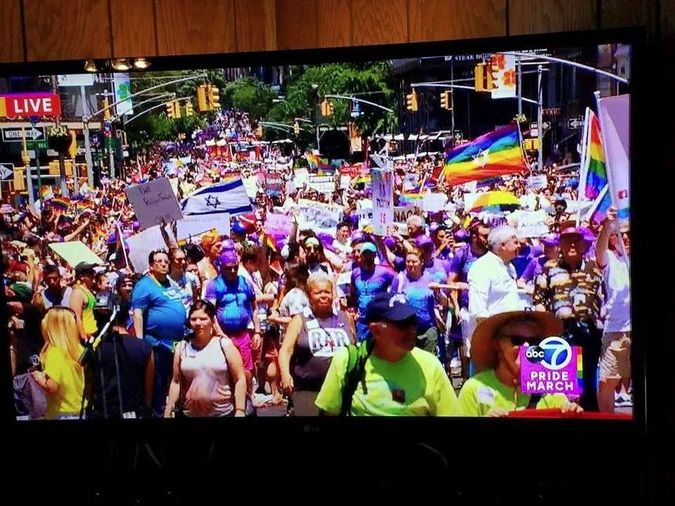 Many of the Jewish LGBTQ organizations that have traditionally marched with CBST’s Pride float in the past, including Keshet, Eshel and Jewish Queer Youth, joined the synagogue again this year. A Wider Bridge, an LGBTQ not-for-profit that is expressly pro-Israel, declined CBST’s invitation and instead chose to march alongside the Israeli Consulate.

Levovitz said that the rule against Israel/Palestine “messaging” was announced at a brunch for Jewish LGBTQ organizations that was held before the start of the march.

Ironically, in the end CBST avoided enforcing the rule, and a handful of activists did carry Israeli flags and sported Israeli-themed clothing.

Levovitz said he decided not to enforce the ban on teenagers from his organization, some of whom brought Israeli flags to the march. He himself carried what he called a rainbow-hued “Jewish Pride flag” that mimics the Israeli flag.

Kleinbaum refused to explain why the ban was not enforced, but Levovitz speculated that the incident at the Chicago Dyke March a day earlier had spooked CBST.

“Had Chicago not happened, possibly the same thing would have happened in our Pride parade,” Levovitz said.

Even though he felt strongly about letting marchers express themselves however they saw fit, Levovitz conceded that he was concerned about a conflict with other progressive LGBTQ activists, many of whom are critics of Israel.

“I was nervous about what the other people in the larger Resistance Contingent would do,” Levovitz said. But he added that the sprawling and celebratory nature of the New York Pride Parade made it less likely to be disrupted: “It was somewhat controlled chaos, and I think that helped us in this case.”