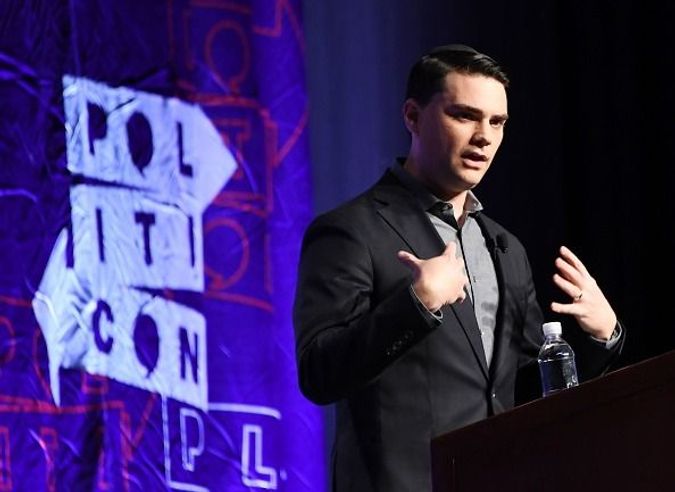 Ben Shapiro speaks at 2018 Politicon in Los Angeles, California in October of 2018. Image by Getty Images

Ben Shapiro is a bit of an enigma. He was the editor-at-large for Breitbart News from 2012-2016; he makes speeches at the March for Life, and he…also has a truly impressive Sefarim collection?

Shapiro, an Orthodox Jew and right-wing pundit who recently won a Twitter spat with The Economist, has had issues with, well, just about everyone. He’s even the target of death threats — recently, authorities in Washington State arrested a suspect who allegedly targeted Shapiro and his family. But he also has myriads of passionate fans including over 2 million Twitter followers that revel in his many controversies.

So where did Shapiro come from?

“The first day on campus,” Shapiro told Zman, “I caught a glimpse of the student newspaper, the Daily Bruin, and saw an article that compared Arik Sharon to Adolph Eichmann. I thought to myself, ‘This is ridiculous.’ I went over to the offices of the Daily Bruin and demanded that I be allowed to write a counterpoint column against the article.’”

He went on to write many more articles for the Daily Bruin, before publishing his first book in 2004. Titled “Brainwashed: How Universities Indoctrinate America’s Youth,” it describes the way in which universities dominated by liberal professors don’t allow for non-left opinions.

After this book, he went to Harvard Law School. He graduated in 2007, and after starting his own legal consultancy firm, came back to media to join Breitbart as an editor at large a few years later. While at Breitbart, Shapiro published articles with titles like “5 Times Hillary and Bernie Pandered to Blacks During the Last Debate,” “Antonin Scalia’s Death Could Mark End of Constitution,” and “#StandWithKimDavis.”

In a 2015 CNN appearance with Jewish transgender reporter Zoey Tur, Shapiro purposely used incorrect male pronouns to describe Tur, spurring a rebuke from Tur and the LGBTQ community. At the end of 2016, in a speech at Yeshiva University, Shapiro told students that being transgender was “a mental illness.” In August of 2018 Alexandria Ocasio Cortez accused him of “cat-calling” her via twitter, and, as reported by the Forward in January of 2019, at the March for Life in D.C., Shapiro made Hitler-as-a-baby related comments that caused several advertisers to pull out of his popular podcast, “The Ben Shapiro Show.” This week on his show, while discussing the shooting at the Chabad of Poway synagogue in San Diego, Shapiro drew comparisons to Congresswoman Ilhan Omar, and said that she has “a lot of the same opinions about Jews that the white supremacist had in that manifesto.”

He appears to be a card-carrying conservative, but it’s not just liberals that have a problem with him; Shapiro is the kind of person who literally enjoys a reputation as an equal-opportunity offender. Shapiro left Breitbart in 2016, citing his support of Breitbart reporter Michelle Fields in the wake of her poor treatment at the site following her assault by Trump campaign manager Corey Lewandowski at a campaign event. After he left, Breitbart posted (then almost immediately pulled down) an article titled Ben Shapiro Betrays Loyal Breitbart Readers in Pursuit of Fox News Contributorship that was shortly followed by a video taunting Shapiro’s calls against anti-Semitism. Milo Yiannopoulos and the “alt-right” don’t like him either, and in a 2016 study, the Anti-Defamation league announced that Shapiro was the target of the most anti-Semitic tweets that year.

AOC and the “alt-right” agree on few issues, but one of them is their joint dislike of Ben Shapiro.

He’s not a unicorn, though. Most Jews his age are Democrats, but Shapiro has several prominent colleagues who have gone a different route. Other young Jews like Bari Weiss, Aaron Klein, and Joel Pollak all fall into a camp entirely of their own making, and though they don’t agree with each other all the time and work for publications as far apart as Breitbart and the New York Times, their right-of-center leanings have garnered a certain amount of attention and controversy similar to Shapiro.

Where is he now?

Shapiro is currently the Editor-in-Chief of The Daily Wire, a news site that he founded himself in 2015, and has become a celebrated figure in conservative media. His podcast boasts millions of downloads every week, and this past fall he hosted The Ben Shapiro Election Special on Fox News. He has published a total of 11 books and they tackle issues like supposed leftist Hollywood propaganda, leftist bullies, and the moral corruptions of social liberalism. Shapiro’s most recent book, published in March of 2019, is titled “The Right Side of History: How Reason and Moral Purpose Made The West Great.” In the book, he claims that the West’s abandonment of Judeo-Christian values has led, in part, to its downturn.

Outspoken about his “constitutional conservative” views, Shapiro does not shy away from critiquing President Trump. He has also called President Obama a fascist, refers to abortion a violent act, has made a multitude of Islamophobic comments, and believes marriage should only be between a man and a woman. He has a lot of opinions, and they don’t necessarily fall neatly into current political discourse – and that’s just how Shapiro likes it.