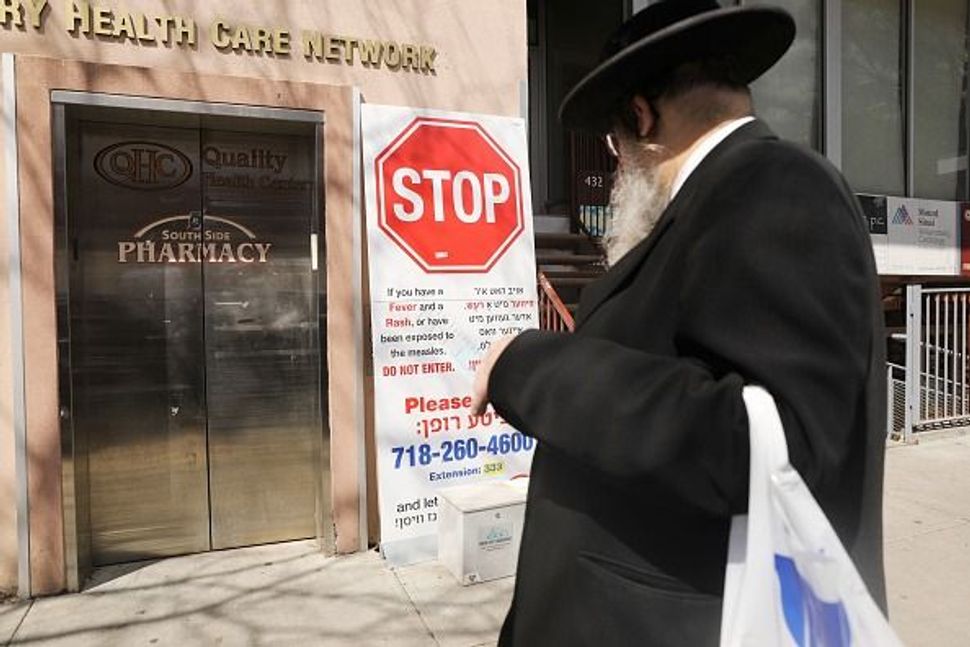 New York City is experiencing the largest measles outbreak in recent history, but the state of emergency Mayor Bill de Blasio called earlier this month was limited only to ultra-Orthodox neighborhoods in Brooklyn.

The first case was reported in Brooklyn in September, and as of last week, more than 300 cases have been confirmed — and it’s only expected to get worse. The highly contagious virus has thrived in Haredi communities. But why?

A minority of the population has accepted anti-vaccination myths, which have easily circulated through tight-knit enclaves via word-of-mouth, call-in hotlines, pamphlets and magazines. The group Parents Educating & Advocating for Children’s Health, or PEACH, has been particularly vigorous in its attempt to scare Jews out of vaccinating their children, from citing leading rabbis to calling measles a “low-risk” disease to insisting vaccines contain cells from unkosher animals, such as pigs.

Some parents believe that the measles vaccine is linked to autism, a notion that has been scientifically disproven. There are others who think health officials’ hullabaloo over the outbreak is singling out the Jewish community as particularly disease-ridden, just as Jews were during the Holocaust and other anti-Semitic eras. One woman wore a yellow star to protest a measles-related quarantine in suburban Rockland County late last month, when unvaccinated minors were banned from public areas.

Most rabbis have urged and even required vaccination, insisting that Jewish law requires the practice. Yet staunch anti-vaxxer parents have openly defied them, with the support of a few rabbis, some of them highly prestigious.

Large families are typical within Orthodox communities, and some have said that they have trouble following the recommended inoculation schedules.

Some sects of Orthodox Judaism eschew modern culture, choosing to live and work amongst themselves. Measles is a highly contagious disease that spreads through the air. So when a child in Brooklyn contracted measles on a trip to Israel (which is having its own outbreak) last year, the disease easily infiltrated segments of the community with lower vaccination rates.

Health officials expect the outbreak to not only continue, but even get worse. Following a spike in cases after the celebration of Purim last month, health officials predict that Passover will lead to a similar outcome. The holiday traditionally calls for large, extended family dinners, and after one man single-handedly infected 39 people on a trip from New York to Michigan, there’s no telling what the infection rate will be after the eight-day holiday.