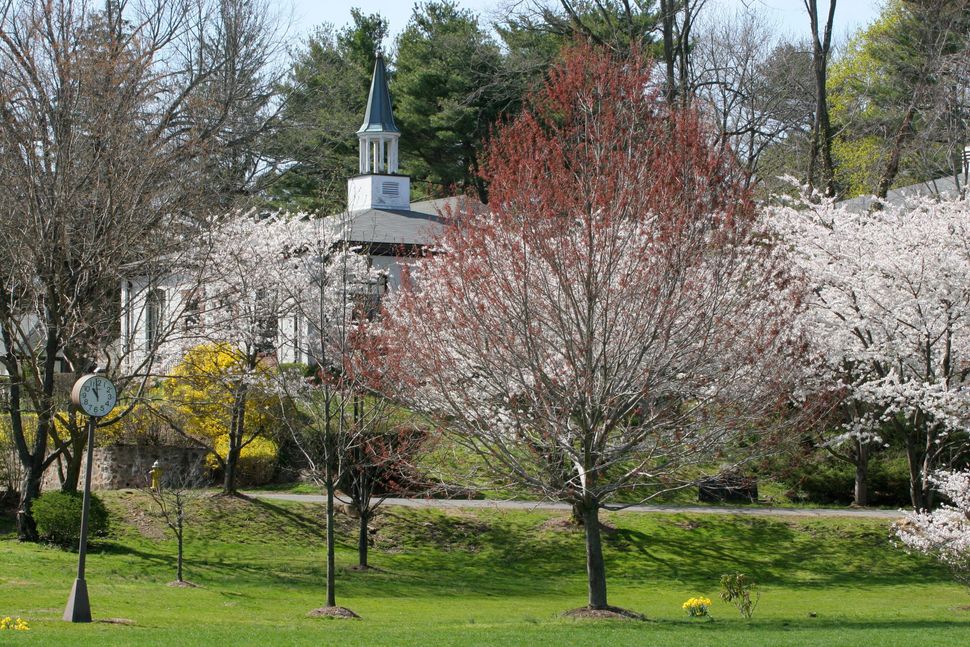 At least one student from every graduating class at Carmel Academy has enlisted in the military.

That wouldn’t be so remarkable if Carmel were a public school, or a large private school in an area with relatively high enlistment rates.

But Carmel is a Jewish day school in Connecticut with 200 total graduates, 13 of whom have gone on to enlist in the Israeli military or join the U.S. military or a federal service academy.

The pattern is even more striking because Carmel only goes to eighth grade, leaving several intervening years for students to make the decision to join a military. Carmel teachers and graduates say that the school’s focus on service projects and giving back — and not directly on military culture or support — may be the reason for the trend.

“They won’t say, ‘I am joining the military because of Carmel Academy,’” said Nora Anderson, Carmel’s head of school. “But I have heard there is something about the education they received at Carmel that makes them want to give.”

Carmel’s first year was in 1998; it originally served families declined admission to the Solomon Schechter school in White Plains due to its full roster. It has since gone from a rented space in Port Chester, New York, to the leafy, 18-acre grounds of what was once an elite girls’ boarding school, in Greenwich, Connecticut. That first group had 24 students. Now there are 175, kindergarten through eighth grade.

The school draws students from the Greenwich area and New York’s Westchester County, as well as from families in New York City. Its tuition is on par with private Jewish academies in the area, starting at $25,500 in kindergarten to over $32,000 in middle school.

At its annual gala in April, the school honored students who have joined or will join either the U.S. or Israeli military. This fall, two graduates of the class of 2015 will be starting at the U.S. Naval Academy in Annapolis, while another is enlisting in the Israeli Defense Forces through Garin Tzabar, a program that facilitates non-Israelis joining the IDF. The split among all the enlisting alumni is about fifty-fifty, with half going to the Israeli military and half going to the American armed forces.

One of the students honored was Olivia Shapiro, a member of the class of 2015 who is going to the Naval Academy this fall. She eventually hopes to study cryptological warfare — codebreaking and such — and cybersecurity for the Navy.

She has been focused on joining the military since grade school, and said that what she saw at Carmel reinforced her feelings that joining the military was an admirable way to serve her country. On Veterans’ Day, the school frequently brought in parents who were U.S. military veterans, as well as the facilities director, also a veteran, to speak about their experiences.

Last year, the wife of the school’s athletic director, Phil Goldberg, was deployed to Kuwait for 11 months with her Army communications unit. Goldberg said the school rallied around him. Parents provided meals, and the school staff paid for nights out to dinner and a movie for him and his two children.

On Veteran’s Day last year, Goldberg’s wife, Yesenia Ochoa, Skyped in from Kuwait to answer questions from students about her deployment.

“You always get the ‘Do you get to carry a gun’ kind of deal,” Goldberg recalled of the Skype session. “One of the most interesting things the children asked was, what’s it like, one, being a woman in the military, and what’s it like being away from your family.”

Goldberg was one of the people who supported Shapiro’s dream throughout her time at Carmel. He pushed her to be fit for service, and connect with another Carmel alum who is a rising senior at Annapolis. But, Shapiro said, everyone at Carmel gave her room to change her mind.

“They wanted me to seek out all the options before making a decision,” she said.

It’s unclear how many Jews are serving in the American military, or whether they volunteer at the same rate as the general population – though Jewish enlistment is more common in areas like the South where where joining the military is more common. This year, the U.S. Military Academy at West Point graduated its 1,000th Jewish cadet, out of nearly 80,000 graduates since 1802.

For the past ten to 15 years, American Jews have gone in increasing numbers to join Israel’s army as “lone soldiers.” An IDF spokesperson told the Forward last year that there were 890 American lone soldiers on active duty.

Anderson said that part of the inspiration to honor these alumni at this year’s gala was to show that Carmel is not just focused on the benchmarks of success that are held in the wider Jewish community: going to a top-tier school, having a successful career, and so on.

“The world is full of brilliant people,” she said. “What I want is to contribute to the world a bunch of caring people.”

The students do various fundraising and service projects throughout their time at Carmel, from read-a-thons, to fundraising for charities, to volunteering as aides and learning partners in the school’s special needs programs.

The school also takes the eighth grade class on a trip to Israel, where they often speak with an alumnus who has been in the IDF, and spend a few hours volunteering in some capacity, such as at a food pantry.

“While we don’t say that we should make aliyah and go to Israel, the idea is mentioned and brought up because there is a greater good, which I think is more of the focus that Carmel has,” said Phil Goldberg, Carmel’s athletic director.

Anderson said that some students inevitably begin wondering if the best way for them to give back to Israel is to join the IDF. In fact, her own son, Noam Sohn, came to that conclusion, and enlisted in the IDF through Garin Tzabar after he spent some of the year between high school and college in Israel.

“The thought process started as, this is a country that protects Jews from a potential holocaust,” said Sohn, 26. “It provides a home for Jews from the entire world, and it felt strange to me that only one category of those Jews, Israelis, had to serve in the Israeli army.”

Anderson said that the school is supportive of kids expressing their military dreams, but never explicitly pushes students toward the military.

“It’s more about asking them what their feeling towards service is,” she said.

Anderson also added that there are other things that drive teenagers to join the military: Zionism, family legacy, career goals. But the school is still trying to emphasize this legacy.

“It’s not hidden,” Anderson said. “For us, its valued, and it’s something that we do because we think that giving back is so important.”