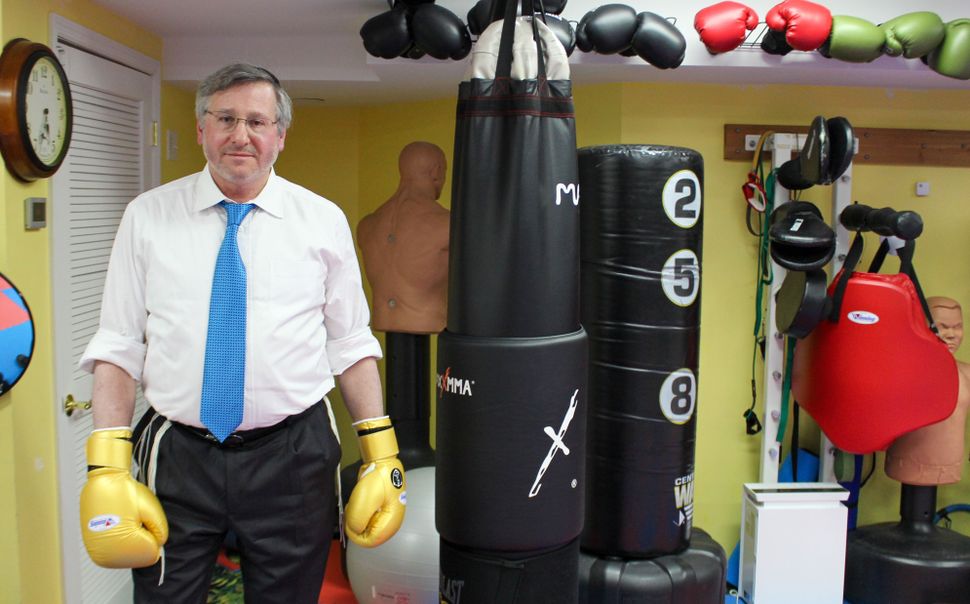 John Bolton is perhaps the most in-demand person in Washington, D.C. If he testifies in the impeachment hearing, he could change the course of history.

But Bolton may sooner show up in the suburban town of Jackson, N.J., than on the floor of the Senate.

That’s because Dr. Richard Roberts — an Orthodox Jewish philanthropist and Republican donor best known for throwing massive free carnivals twice a year — has announced that Bolton is planning to come to Jackson to address a growing problem for Orthodox Jews there: alleged anti-Semitism and discriminatory behavior from the town’s Republican leadership.

It’s part of a semi-clandestine effort Roberts has undertaken since December to make national Republican figures aware of the issues in the town, which has a growing Orthodox community. This is the second crusade Roberts has taken on in his retirement, but it’s the first that will test the limits of his pull in D.C. and the extent of anti-Orthodox sentiment in Jackson.

“Part of me says, ‘What do I need this for? Why do I keep taking on other peoples’ problems?’” Roberts mused recently at his home near Jackson, next door to the synagogue, open to all, that he owns and manages. But his fellow Jews have been pleading for his help for over a year, he said. “I just felt like I couldn’t say no anymore.” 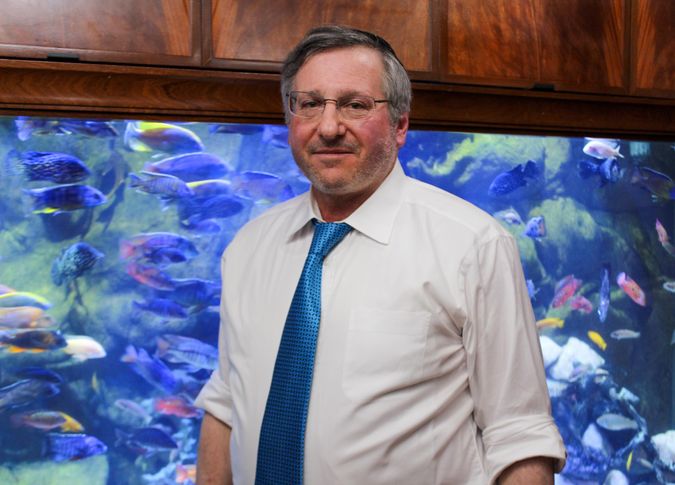 Richard Roberts at home, in front of the aquarium that serves as the backdrop for his sporadic addresses to the Orthodox world. Image by Ari Feldman

Roberts’ style is warm and modest — heimishe, in Yiddish. His house shares a block with middle-class homes in the middle-class Orthodox hub of Lakewood, just east of Jackson, which is populated by yeshiva students and recent graduates.

He wears the unofficial Orthodox grandpa uniform of black orthopedic sneakers, dark slacks and a white dress shirt with a loosely knotted tie. But don’t let the outfit fool you: He trains four days a week in mixed martial arts in his private basement gym.

His other hobby is more widely known: He gives periodic video addresses to the Orthodox world sitting in front of a massive aquarium filled with tropical fish — how many, he doesn’t know. (More tanks, with many more fish, can be found in the basement.)

Roberts’ hobbies, philanthropic largesse and political donations are funded largely by the $800 million sale, in 2012, of the generic drug company he ran for 15 years after taking it over from his father. He’s hosted Sens. Rand Paul and Lindsey Graham and former Wisconsin Governor Scott Walker at his home over the years. He and his wife donated roughly $2.5 million to Republican candidates and groups, according to 2015-2016 data from the Federal Election Committee.

They’re not the Adelsons, who donated nearly $83 million for that period, or the Sabans ($16.4 million) or the Marcuses ($13.4 million), to name some of the leading Jewish philanthropists-cum-political-donors. But in the world of Haredi Jews — who are sometimes referred to as ultra-Orthodox — the Roberts’ political donations are without peer, said Ezra Friedlander, a lobbyist and political consultant who runs The Friedlander Group firm.

“He’s in a class all by himself,” Friedlander said. “I don’t know of anyone else who plays at that level.”

In Lakewood, he’s known for giving gifts of all sizes. Beggars can come away from his doorstep with a few dollar bills. The synagogue next door, however, costs a half million dollars a year to operate, Roberts said, and the carnivals are $100,000 a pop.

As a problem-solver, he already has credibility for his efforts on an intra-Haredi problem: anti-vaxxers. In 2018, he banned unvaccinated children from the carnivals, and distributed a pamphlet he edited — 192,000 copies — with letters of famous rabbis endorsing vaccination to Hasidic hubs around the New York area. So far, he’s chalked his efforts up as a win, citing personal reports from Monsey, Boro Park and other places that the pamphlet has had the desired effect: convince Hasidic Jews who have little access to outside information that their community’s leaders want them to vaccinate.

Now Roberts is about to find out whether confronting vaccine skeptics is harder than tackling alleged anti-Orthodox discrimination in suburbia. 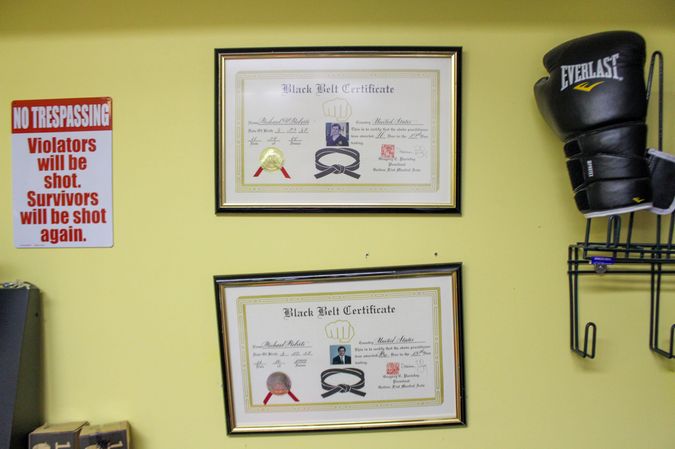 In Richards’ basement gym, where he trains four days a week in mixed martial arts. Image by Ari Feldman

Jackson is one of several towns around Lakewood — including Toms River and Freehold — that have balked at an influx of Orthodox families in recent years who are seeking the more suburban lifestyle that Lakewood promised decades ago.

On social media, pages like “Rise Up Ocean County” and “Jackson NJ Strong” have served as safe spaces for suspicious and bigoted comments about Orthodox Jews. In the past two years, Jackson has been sued at least three times over town ordinances that were allegedly designed to discriminate against Orthodox Jews. In one case, municipal workers allegedly “staked out” an Orthodox home where several families were gathering for Shabbat services, under suspicion that it was an unauthorized synagogue.

Yisroel Friedman, a 33-year-old Jewish Jackson resident, says that people in the town have repeatedly yelled and swore at him and his family as they walked to synagogue.

Friedman, a business financing consultant, feels that the animus both fuels and is fueled by the township’s actions and comments of its leaders. The irony, he says, is that his family moved to Jackson to escape the kind of overdevelopment in Lakewood that many non-Jews in the county fear will inevitably come with more Orthodox residents. And not only that: He votes Republican, along with the majority of Orthodox Jews in the Lakewood area. He recently attended a meeting of the Jackson Republican Club in order to ingratiate himself with his neighbors.

Local Jewish residents are also aware of rising assaults of Orthodox Jews in Brooklyn, which have led to pervasive feelings of fear and frustration in the Orthodox world. Recent attacks on Hasidic Jews, including a deadly shooting in Jersey City, have only heightened the community’s concerns.

Roberts is focusing primarily on allegations of anti-Semitic comments by Republican town leaders, including the mayor and several council members and municipal officials. He’s condemned the comments in letters to the mayor and to the head of the county’s Republican Party, and has already managed to direct some attention to the problem from D.C.

On the day of the White House Hanukkah party in December, Richards boarded a private jet with two of his daughters and a son-in-law and zipped down to D.C. for several meetings. The group met with Ronna McDaniel, the chair of the Republican National Committee; Representative Kevin McCarthy (R-Calif.); as well as “a major Democrat senator and someone else,” Roberts said. He may or may not have had a meeting with a White House official — he demurred when pressed on the question.

Richards admits that he’s not a Beltway insider, and simply pulled the strings he had available to help to request relief.

“I went to them and said, ‘Here’s the situation. Help,’” he said. “I was pleased with my reception, and I was pleased with the RNC’s press release, but I will be disappointed if there isn’t more substantive things they can do.”

Since then, he says, he’s been emailing with people he declined to identify about what more can be done, both publicly and privately.

It’s not clear how much Roberts can accomplish. Bolton is, so far, the only nationally known political figure who Roberts has publicly said will come address the issue. But Roberts said Friday that he doesn’t know when Bolton will be able to come; the sought-after impeachment witness told Roberts he will not be available to travel until after the Senate trial. (A representative for Bolton did not respond to an emailed request for comment.)

If Roberts is successful, this would not be the first time that a New Jersey county pressured a town to change ordinances and discipline town leaders over concerns of anti-Semitism, as happened in the town of Mahwah, on the border with New York.

Mahwah “ultimately changed as a result of pressures that were brought to bear on them,” said Gerald Cardinale, a senior state senator who represents Mahwah’s district.

“Bringing it to light with people like John Bolton and other people at that level in D.C. may get the point across that you gotta work this out and live together” with Haredi Jews, Bressi said.

But not everyone is convinced that Roberts’ public moves are in the best interest of the area’s Orthodox Jews. Friedman said he was worried that Roberts’ efforts could make Jackson political leaders dig their heels in.

He feels the solution may be simply more dialogue between Orthodox Jackson residents and municipal leaders, “more than forcing their hand and having the RNC come down on them hard.”

Roberts says he’s open to other ideas, and knows there’s only so much he can do as one person, even if he has a lot of money and friends in high places. But, he says, he’s simply using the tools he has access to try to fix an ugly situation.

“Getting the job done is not my responsibility,” he said. “My responsibility is to do my hishtadlus, do my duty. And however God wants it to turn out, that’s how it will be.”