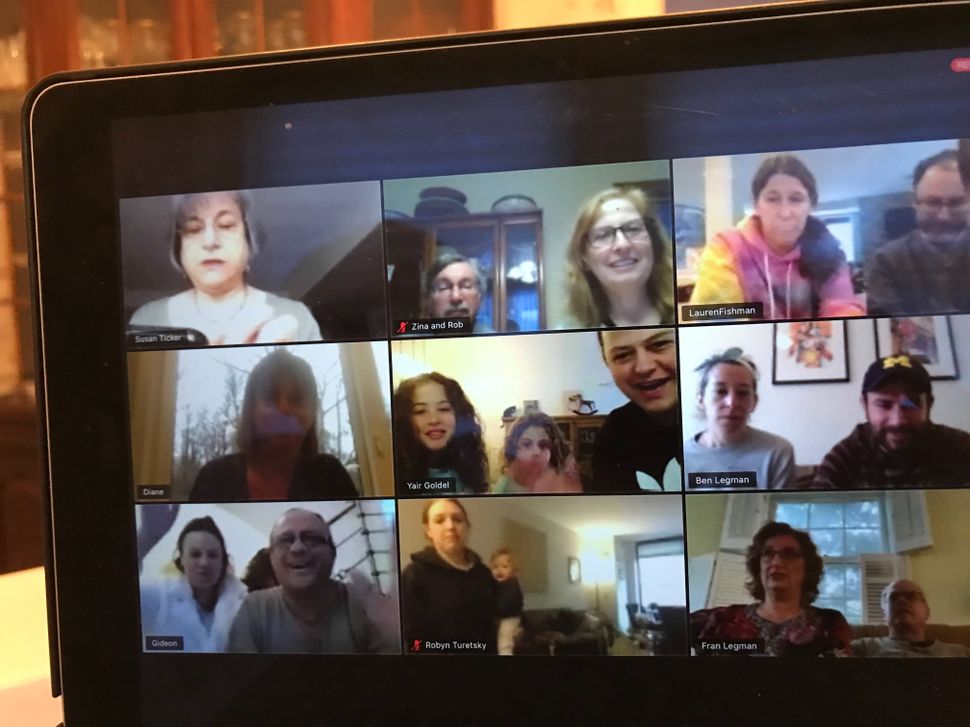 Family “zoomed” in for the occasion.

Conservative and Reform Judaism — the United States’ two biggest egalitarian denominations — have been converging for decades. Now coronavirus has wiped out yet another difference between them.

Even before the pandemic, Reform communities had embraced streaming services. Conservative synagogues, however, mostly avoided it in order to keep technology from creeping into Shabbat observance.

Now the Conservative movement has ruled that streaming on Shabbat and holidays is allowed, and that one can fulfill one’s obligations in prayer by following along with a service over Zoom.

There are many caveats in the decision, which the movement said was in the works before the pandemic. For instance, the video system cannot be set up on Shabbat or a holiday. It has to be already running, or turned on by a timer.

The announcement of the decision came as Rabbi Rick Jacobs, the leader of the Reform movement, said he was willing to consider merging part of his movement’s synagogue organization with the counterpart groups of other denominations — a move that scholars have predicted for decades, and which they think could lead to a broader merging of the Jewish egalitarian community.

The two developments brought into sharp relief a question that is being confronted by Conservative and Reform congregations, which have increasingly cross-pollinated and drawn on the same sources of innovation in updating their liturgies and approach to prayer.

What are the remaining differences between the two movements now?

Some Conservative rabbis have broken with the movement over interfaith marriage, and some have been expelled for officiating interfaith weddings. It’s one of the few things that can still get you kicked out of the movement. Yet there are an increasing number who are pushing for the movement to officially allow rabbis to officiate these ceremonies.

There are still minor differences in the texts the two movements use. Conservative synagogues often recite a fuller version of certain prayers than Reform ones, or pray entire services — like the first service of Shabbat morning — that Reform synagogues skip. For example, the Reform movement has updated the second blessing of the Amidah, the centerpiece of the Jewish prayer service. Instead of blessing God for being able to give life to the dead — the original blessing that the Conservative movement still uses — the Reform movement changed the language: Blessed are you God, for granting life to all things.

Conservative synagogues once completely forbade the playing of musical instruments during the service, while the Reform movement has consistently put music at the center of its worship, from church-style organs in classical Reform temples to the heyday of Debbie Friedman in the 1990s.

Approaches to conversion vary widely within each movement, but in general, some broad differences remain. Conservative rabbis are more likely to require that male converts undergo circumcision if they are not circumcised or hatafat dam, a ceremony in which a pinprick of blood is drawn from the foreskin area, to symbolize the classic circumcision ceremony. Reform Judaism does not require converts to undergo circumcision.

Still, some metropolitan areas have multi-denominational conversion panels, for which member rabbis agree to adhere to a uniform conversion process regardless of their movement or affiliation.

Conservative Jews — and Conservative institutions — are generally more likely to abide by the full rules of kashrut than their Reform counterparts. Reform synagogues may not keep a strictly kosher kitchen, but many forbid shellfish and pork — foods forbidden in the Bible — on their premises.