At the first major Israeli-American conference since Trump’s loss, less rancor and partisanship 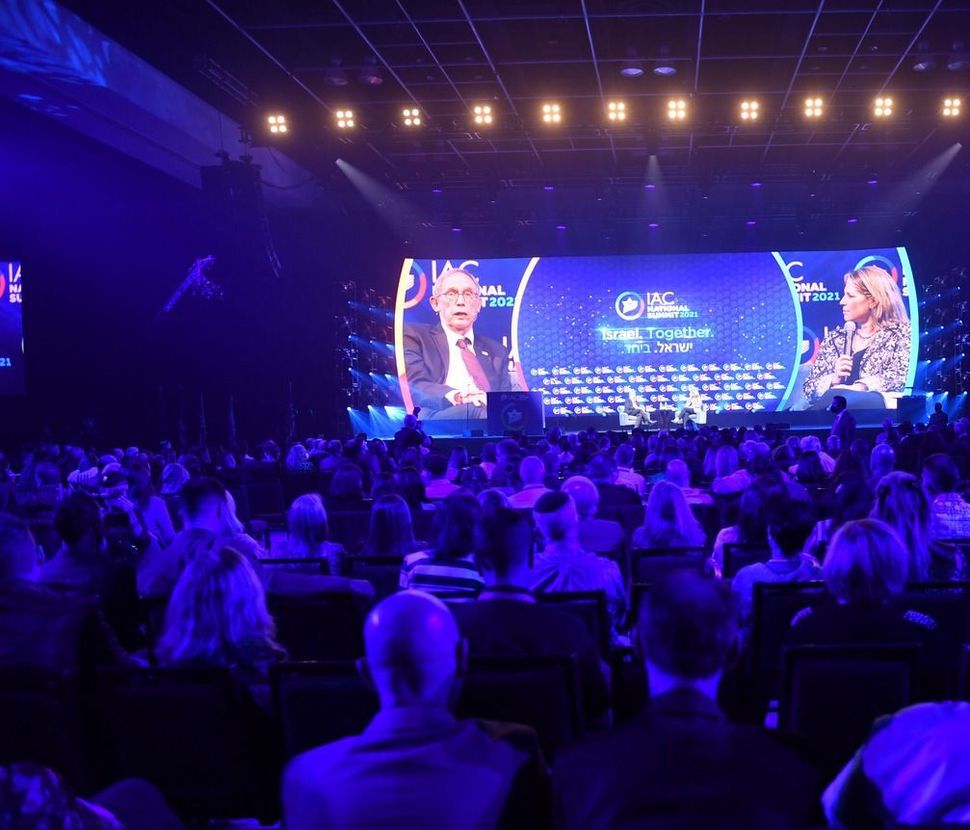 More than 3,000 people gathered in Florida this past weekend for the Israeli-American Council’s conference, an annual affair where pro-Trump forces that celebrated so enthusiastically at the group’s last convention were either absent or notably subdued.

That 2019 conference (the group did not meet in 2020 due to COVID-19) felt much like a campaign rally for former President Donald Trump. This year’s meeting in Hollywood, Florida, the seventh annual, marked the first time a major Israeli or Jewish American group has come together since the pandemic began, and reintroduced the more bipartisan tone that had characterized most past IAC conferences. 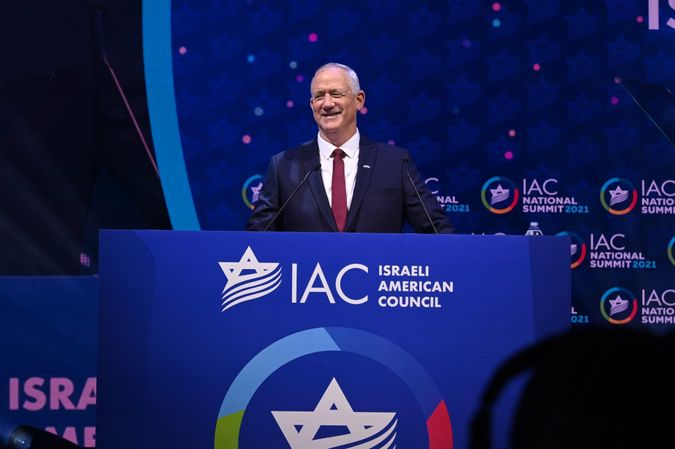 “Every president, every U.S. administration, has supported and continues to support Israel to this day, and for this we are very grateful,” said Israeli Defense Minister Benny Gantz, who attended the conference after visiting U.S. cabinet officials in Washington. “Israel’s leadership, and myself within it, will never stop working to protect ongoing, bipartisan support for Israel.”

The Israeli-American Council, founded in 2007 in Los Angeles as a non-political Jewish association for Israelis living in the U.S., has turned more political in recent years, and attracted the highest-ranking elected officials from the U.S. and Israel to its summits.

In 2019 Trump showed up and was greeted by chants of “four more years.” In his remarks to the crowd, he bemoaned the American Jewish community’s continued support for the Democratic Party. That same year, Rep. Debbie Wasserman Schultz, a Democrat from Florida, was jeered when she defended her party’s record on Israel. A year earlier, former Vice President Mike Pence drew cheers as he ticked off a list of Trump administration Israel-related initiatives. Also that year, top Democrats took the podium: House Speaker Nancy Pelosi and Senate Democratic leader Chuck Schumer.

This year’s conference featured measured remarks from featured speakers including Gantz, who was in the U.S. for meetings with Biden administration officials, and U.S. Rep. Ritchie Torres, a New York Democrat who received several rounds of standing ovations for his strong support of Israel. 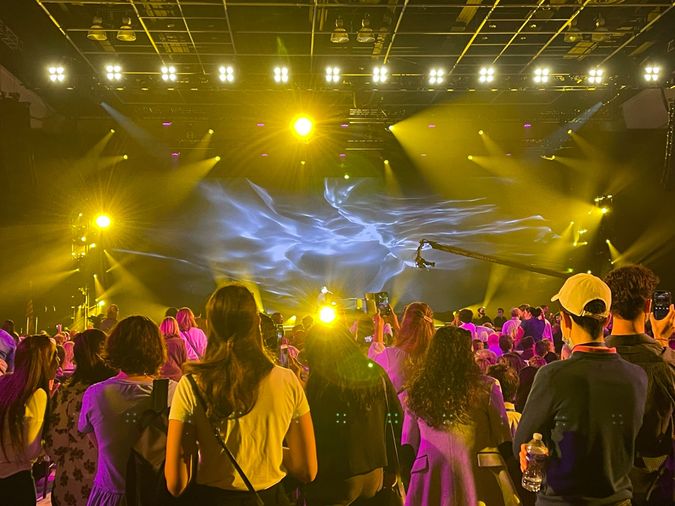 Upbeat Israeli music pervaded the conference hotel, the Diplomat Beach Resort, where pricey pastrami sandwiches were cooked up in the makeshift “shuk.” But the absence of Trump and other speakers who enjoy riling up a crowd, in addition to pandemic safety protocols, ensured a less boisterous affair.

Attendees were required to take a rapid COVID test prior to registering at the hotel. And masks were distributed at the entrances of the main ballroom, though most people held them in their hands or wore them as chin coverings. Shabbat dinner was held in the patio of the hotel and screens were placed strategically to allow for social distancing. Israeli panelists and guests are required to quarantine upon their return. 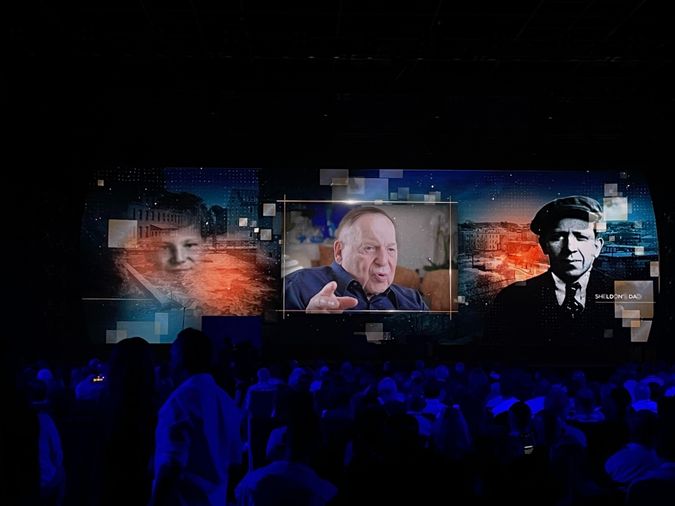 A tribute to Sheldon Adelson at the Israeli-American Council summit December 9-11, 2021

Also missing from this year’s conference was Republican kingmaker and top IAC backer Sheldon Adelson, who passed away earlier this year. Honored during Friday’s plenary session, Adelson had been a magnet at past conferences for GOP politicians seeking his support. His widow, Dr. Miriam Adelson, who has reportedly resumed making political contributions ahead of the midterm elections, came to this year’s conference but kept a very low profile.

In the ballroom and in the corridors of the conference, while the speeches and panel were mostly conducted in English, the dominant language was Hebrew.

Amit Segal, an Israeli political commentator, said during a panel on Friday night that it seemed as if attendees, naturally aligned more closely with the right in Israel and admirers of Trump, had come to grips with the change of governments both in Israel and in the U.S., and the fact that much of their agenda has been put on ice.

They realize, he continued, that President Biden is eager to return to the 2015 nuclear deal with Iran, and that the government in Israel is stable and headed by a caretaker prime minister, Naftali Bennett, who much as he would like is unable to pursue the policies of his conservative party and allies.

Other highlights from the Israel-American Council Conference, Dec. 9-11: 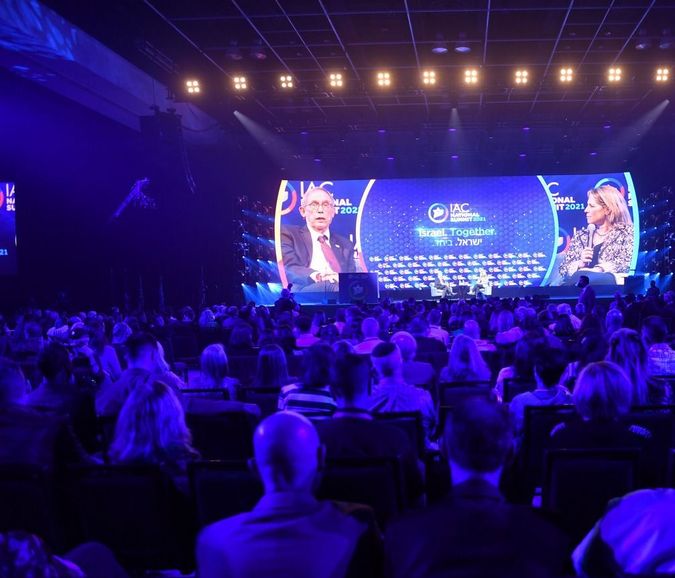 “Do you know of any other state or country on earth that has brought in 3,000 people from Africa?” Shai asked, referencing a recent decision by the Israeli government to allow an estimated 3,000 Ethiopians to immigrate. “So when they ask you about Black Lives Matter, tells them that, in Israel, Ethiopian Lives Matter.”

Paying a political price for Israel

Torres, in his first House term, said that he has been harassed and received death threats for standing up for Israel. “If you are some Republican it is easy to be pro-Israel,” he said in remarks at the final plenary session on Saturday. “If you are a moderate Democrat in a moderate district, it is still easy to be pro-Israel. But if you are a progressive Democrat in New York City, you have to pay a heavy political price.” 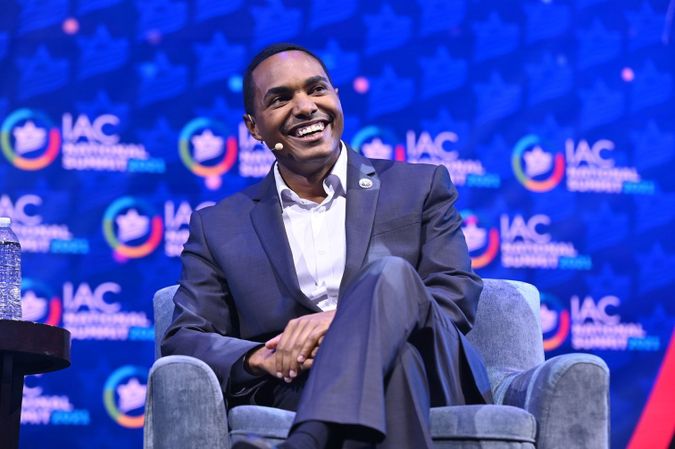 Rep. Ritchie Torres, a Democrat from New York, at the Israeli-American Council summit in South Florida on Dec. 11, 2021 Image by Noam Galai

Torres, 33, who won a crowded primary in the 15th congressional district in the South Bronx, is one of two openly gay Black members of Congress and has built a fan base in the Jewish and pro-Israel community for his outspoken support for Israel. “I am likely to face a primary challenge because of my decisions,” he said. “But I’m convinced I’m doing the right thing,”

“For me, one need not be Jewish or Israeli to see clearly the antisemitic double standard against Israel,” Torress added, to loud applause.

Gantz, who before the conference had spent two days in Washington, D.C., in meetings with Secretary of Defense Lloyd Austin and Secretary of State Antony Blinken, said he found both men attentive to his message.

“I told them that Iran is first and foremost a global and regional problem, and only then a challenge to Israel,” Gantz related in a press briefing. He added that he also shared Israel’s “Plan B” if indirect talks between world powers and Iran in Vienna to return to the 2105 nuclear deal fail. The Israeli military, he said, is prepared to strike Iran independently.

“I concluded the visit as heartfelt, genuine and important for Israel’s security,” Gantz said.

A senior security official in the Israeli delegation told the Forward, on the condition of anonymity, that the administration did not try to link the Iran deal and the progress on peace between Israel and Palestinians. The official also said that Israel is hopeful that if talks with Iran stall, Americans will support Israeli military action against an Iranian nuclear threat.

At the first major Israeli-American conference since Trump’s loss, less rancor and partisanship