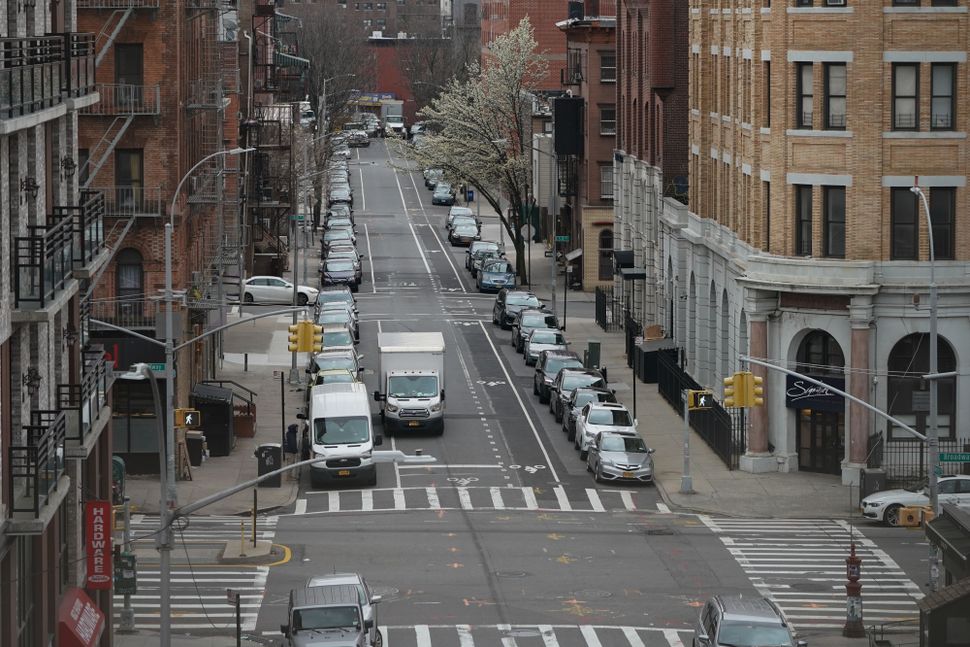 A nearly empty street is viewed in the Williamsburg section of Brooklyn on March 25, 2020 in New York. Image by BRYAN R. SMITH/AFP via Getty Images

A principal at United Talmudical Academy, a complex of schools serving the ultra-Orthodox Satmar community, told a teacher to hold classes in person despite coronavirus social distancing orders, according to a school answering machine recording from last week.

In the recording, the teacher, a man identified as Mr. Weiss, tells students they have permission from their principal, Yakov Herman, to come in person to their eighth grade class. The recording can be accessed through a series of menu options in Yiddish stemming from United Talmudical Academy’s main phone number.

“The principal was here and he’s asked that whoever can come to Cheder tomorrow should come and wear their gloves,” he said, using the Yiddish word for grade school.

Another recording from before Passover, which started on April 8, accessed through the same answering machine service asked parents to volunteer their basements for in-person classes.

“Until the situation resolves we’re seeking the following and asking for those who can provide basements or larger rooms in private homes where we’d be able to place 10-12 children to study with their teachers on a smaller scale, of course, strictly according to governmental instructions,” said the message from before Passover, which was from another teacher, Shmiel Leibish Schwartz. That message was also aimed at parents of students in eighth grade.

Schwartz was apparently referencing social distancing guidance to avoid gathering in groups of more than 10 people, but New York State and New York City health department guidance stipulate that all schools are supposed to be closed, or operating in distance-learning mode.

The recordings call into question claims by Satmar leaders and officials from New York City Mayor Bill de Blasio’s office who have insisted that the underground yeshivas operating in Williamsburg were being run by rogue teachers without authorization from rabbinical authorities or administrators, that there was only one classroom in operation and that students met only for a single day.

More than 3,000 children who attend UTA from pre-kindergarten through 12th grade. It is the largest system of Satmar yeshivas in Brooklyn. (It is separate from Central United Talmudical Academy headquartered in upstate New York.)

Williamsburg is home to the largest population of Satmar Hasidic Jews in New York City. The community is characterized by very strict religiosity and yeshivas intensely focused on religious education.

A source who spoke on the condition of anonymity for fear of alienation from the community brought the recordings to the Forward’s attention. Staff from the Yiddish Forverts called the number and verified the first recording.

After the source sent the second recording, UTA protected the message behind a password. Forverts staff could not verify it without the PIN, but the number the source provided did bring the caller to Schwartz’ phone mailbox.

When reached by phone, Principal Yakov Herman hung up on a reporter who asked about the recordings and said in a subsequent call that he did not want to speak to the press.

City officials did not immediately respond to requests for comment.

It is not yet clear how many classes have been operating in secret and for how long, but the new recordings suggest more widespread coordination than was previously thought.

A different source who spoke to the Forward Monday on the condition of anonymity due to fears of retaliation by the community said Satmar schools attended by his children of different ages were running classes in apartment buildings and synagogues since mid-March.

After the Forward published its first story on the matter, New York City officials broke up one of the schools, which it declined to name. A city spokeswoman said the dispersal was tied to the Forward’s reporting.