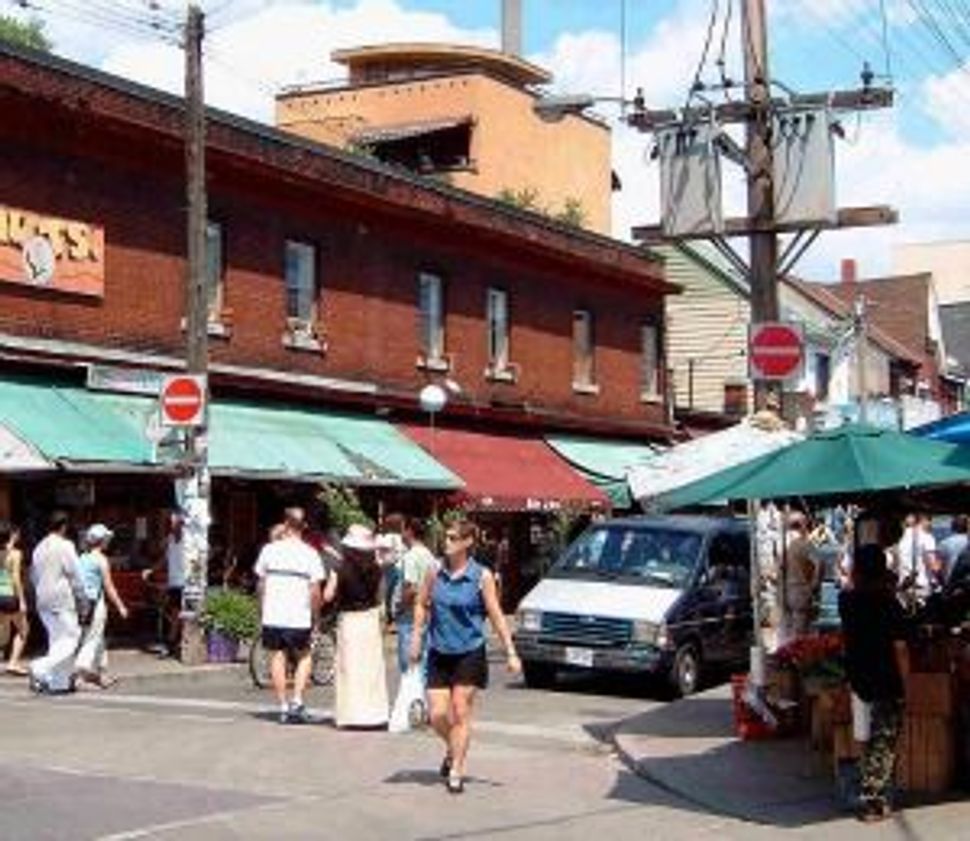 Will Walmart’s arrival spell the end of Kensington Market, the quirky, vibrant Toronto neighborhood that housed most of the city’s Jews in the early 20th century?

Locals think so. And more than 40,000 of them have signed a Change.org petition urging the city to reject a property developer’s proposal for a three-story mall whose anchor tenant would be the Arkansas-based big-box retailer.

Walmart would abut a neighborhood of narrow streets where mom-and-pop shops still hawk nuts from buckets outside storefronts, and fishmongers and cheese merchants do a thriving trade. New arrivals like artisan food purveyor Thomas Lavers Cannery & Deli – whose locavore wares include house-made pickles and pastas – have also contributed to a mini-resurgence of the market as foodie hotspot.

“Don’t let a Walmart and 3-story shopping mall destroy Kensington Market,” reads the Change.org headline. It’s not hyperbole, says Jennifer Herszman Capraru, a theater director and a leader of Friends of Kensington Market, the ad-hoc group behind the petition.

“Toronto is becoming zombies in condo hell. Kensington Market is one of the last bastions of alternative community in the downtown core,” said Capraru, a Montreal native and daughter of a Holocaust survivor.

“Kensington Market is one of the oldest open-air markets dating from the turn of the century still existing in North America,” Capraru said. “When you shop here, you support a family. The money stays in Kensington. Walmart will be taking capital out of our community and investing it in a multinational corporation.”

Marion Kane, a veteran Toronto food journalist and Kensington Market local, is even more emphatic. “WalMart is a store that keeps its prices low through exploitation of its employees and of the workers in poor countries who toil in sweatshops in dangerous conditions,” she told the Forward. “Walmart buys on such a huge scale that they can undercut virtually anyone but especially small, independent retailers such as those that have been the heart and soul of Kensington Market for more than a century.”

The neighborhood’s character was heavily Jewish for decades. After World War I, Jews began moving to Kensington market in huge numbers – and transformed “a tired residential neighborhood” to “a burgeoning marketplace — first via handcarts pushed through the streets, and then by stalls opened up on residents’ front lawns,” according to a market history on Toronto site BlogTO.

By the 1930s, nearly 80 per cent of Toronto’s over 40,000 Jews called the Kensington Market area home. After World War II, much of the Jewish population had left the market, to be replaced by next-wave immigrants that included Portuguese, Hungarians, Italians and Ukrainians, according to BlogTO.

Few vestiges of the area’s Jewish character remain, though the majestic Kiever Synagogue – once the market’s spiritual heart – has been the site of well-received art installations by Toronto’s Koffler Centre of the Arts. The market also gained notoriety in 2009 when an exhibit aimed at celebrating the area’s Jewish roots by artist Reena Katz was deemed anti-Zionist by local Jewish organizations.

As pressure mounted on Walmart, the retailer yesterday issued a statement that “it goes without saying that everyone has the right to voice their views and we will continue to listen closely.”

Toronto-based property developer RioCan – which is proceeding with the project despite a rejection by the Ontario Municipal Board – didn’t return the Forward’s requests for comment.