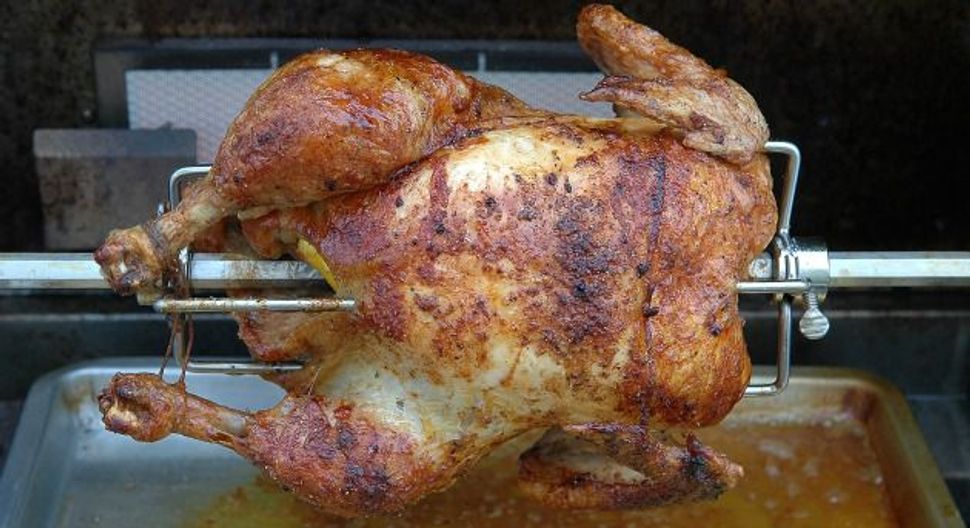 The policies of Israel’s longest-serving prime minister are starting to bear an eerie resemblance to climate change: The critics all look like a bunch of whining scaremongers prophesying an implausibly apocalyptic ruination that’s sure to come in some fuzzily distant end-time. Even if it’s true, it’s too far away to worry about. That is, until one day the oceans overflow, and here we are.

Not that the arrival of payday alters anyone’s behavior.

In the case of Israel, the past week brought three headline events that look like important turning points in Israel’s growing international isolation. Two were genuine canaries in the coal mine, signals that we’re entering a new and sharply more perilous period for the Jewish state. The third was a farcical episode that doesn’t signal much of anything, except as an anecdotal mile-marker of how far we’ve slid down the slippery slope.

So which one made us sit up and take notice? Why, the third one, of course. The farce.

That would be ChickenshitGate, the international furor over an unnamed U.S. government official’s description of Benjamin Netanyahu as a bit of poultry-poop. It erupted Tuesday night, when the quote appeared online in an essay by journalist Jeffrey Goldberg of The Atlantic, “The Crisis in U.S.-Israel Relations Is Officially Here.” Goldberg followed the “chickenshit” quote with a list he’s kept of other insults Washington officialdom has directed at Netanyahu in recent years (“recalcitrant,” “myopic,” reactionary,” “obtuse,” “blustering,” “pompous,” “Aspergery”) before proceeding to explain how and why relations between the two allies have gotten worse than ever.

When you think about it, “chickenshit” wasn’t really the worst insult on the list. Most of the others describe worse qualities than timidity. What caused the uproar over this latest entry was the locker room language. Apparently Israel’s leading defenders were, to quote from “Casablanca,” “shocked! — shocked!” — to find that Washington bureaucrats use dirty words when the microphones are off.

The shock was strangely lacking in self-awareness, given the fact that Israeli cabinet ministers had been directing an open stream of personal invective at Secretary of State John Kerry since January. It began with Defense Minister Moshe Yaalon calling Kerry “obsessive” and “messianic.” Yaalon got paid back in October with humiliating rejections of his requests for meetings during a Washington visit with Kerry, Vice President Joe Biden and National Security Adviser Susan Rice. And yet he still managed to find time while he was in Washington for one more insult, telling the Washington Post’s Lally Weymouth in an interview that the Obama administration’s Middle East policies were based on “ignorance” and “naivete.”

And that came just days after economics minister Naftali Bennett all but accused Kerry of anti-Semitism for linking ISIS and the Israeli-Palestinian conflict — a link that Netanyahu himself had drawn, in slightly different form, in his U.N. speech in September.

By Wednesday morning, chickenshit was all anyone was talking about in Israel or America’s Middle East policy and advocacy communities. Several American Jewish organizations, including the Orthodox National Council of Young Israel and the putatively consensus-building Conference of Presidents of Major American Jewish Organizations, called for the potty-mouthed official to be hunted down and firmly dealt with. In Israel, the Hebrew media struggled almost comically to find a way of explaining the barnyard imagery to their readers, given that Hebrew has no precise equivalent; most settled for some variant of pachdan or “coward.” Netanyahu himself offered up a self-defense that was, well, blusteringly obtuse, in a televised speech at a special Knesset session (convened, ironically, to honor the memory of the assassinated far-right soldier-politician and advocate of “transfer,” Rehavam “Gandhi” Ze’evi). It was only because he “defends Israel’s security interests” that he was attacked, Netanyahu said. “If I didn’t defend Israel, they wouldn’t attack me.” Nothing to do with the fact that he repays America’s billions of dollars in aid and military and intelligence cooperation by repeatedly sticking his thumb in the president’s eye.

To Israelis and their advocates, the insult looked like confirmation that the Obama administration represented a new and dangerous type of U.S. leadership, riddled with barely concealed hostility toward Israel. It confirmed the belief of many Israelis that the Obama administration was something new in U.S.-Israeli relations, an American administration that broke with America’s long tradition of automatic support for Israel. It didn’t seem to register that America might look at the Netanyahu government as something radically new, an Israeli leadership that expected America to cater unquestioningly to Israel’s needs but refused to consider American interests when shaping its own policies and actions.

It took the attempted assassination in broad daylight Wednesday afternoon of a beloved figure on the messianist ultra-right, Rabbi Yehuda Glick of the Temple Mount Faithful, the group that’s been angling to ignite World War 3 from atop the sacred hilltop, to knock the potty-mouth diplomatic flareup out of the lead headlines. Not that ChickenshitGate went away. Secretary of State Kerry went out of his way to calm Israelis’ nerves and assure them that the statement didn’t represent U.S. policy. He told a press conference that the insult was “disgraceful” and “damaging” and followed up with a conciliatory phone call to Netanyahu.

Amid the furor, a close observer might have missed the fact that Israel had real problems this week. The attempt on Yehuda Glick’s life was just the latest escalation in a steady bout of unrest in East Jerusalem that’s been roiling since the murder of Mohammed Abu-Khdeir in July. For weeks it was limited, if that’s the right word, to sporadic rioting, rock- and Molotov cocktail-throwing. On July 25 two Palestinians were critically wounded during a rampage by a right-wing Jewish mob. On August 4 a Palestinian bulldozer driver rammed a bus and killed a yeshiva student. On September 7 a Palestinian youth died from wounds sustained in a police shooting. On October 22 a Jewish infant was killed when a Palestinian drove his car onto a crowded light-rail platform.

The eruption of violence disturbed an uneasy calm that had largely prevailed in the city’s eastern sector for several years. It appears to have been touched off originally by the kidnapping of the three yeshiva students in early June and the revenge killing of Abu-Khdeir. What’s caused the escalation since then depends on one’s perspective. Israeli authorities, including the prime minister, blame the rise in violence on verbal incitement by the Palestinian Authority. Palestinians blame it on an escalating expansion of Israeli presence in East Jerusalem, including stepped-up construction in existing Jewish neighborhoods and the movement of Israelis into mostly Arab neighborhoods, all intended to bolster Israel’s permanent hold on the eastern sector.

However it started, though, the violence and tension has increasingly focused on the Temple Mount, the most sensitive and combustible spot in the tense city. Israeli activists have sharply increased efforts in recent weeks to change the status quo, which has preserved the compound since 1967 as a Muslim sanctuary, and establish a Jewish religious presence. The efforts, including demonstrative visits by large groups of religious Jews, have prompted not only violent protests by Muslims on the mount but tensions with Jordan, which retains a role as custodian of the Islamic shrine. Prime Minister Netanyahu, after initially blaming the tension on Muslim extremists, responded to direct American pressure on Saturday by calling on Knesset members to show restraint, implicitly acknowledging that provocative statements and actions by senior figures have contributed to the rising tension.

Amid the mounting violence in Jerusalem and alarm over growing U.S.-Israeli tension, Israel suffered a diplomatic blow on Thursday when Sweden became the first European Union member to recognize the state of Palestine. Three other EU members, Poland, Slovakia and Hungary, also recognize Palestine, but they took the step before joining the EU.

Israel’s foreign minister, Avigdor Lieberman, called the action “deplorable” in a clumsy statement that tried to belittle the Swedish move. “Relations in the Middle East are a lot more complex than the self-assembly furniture of IKEA,” Lieberman said.

Swedish Foreign Minister Margot Wallström replied that she would be “happy to send him a flat pack of IKEA furniture and he will also see that what you need to put it together is, first of all, a partner.”