Anthony Weiner, Huma Abedin and What It Means To Be ‘The Good Wife’ 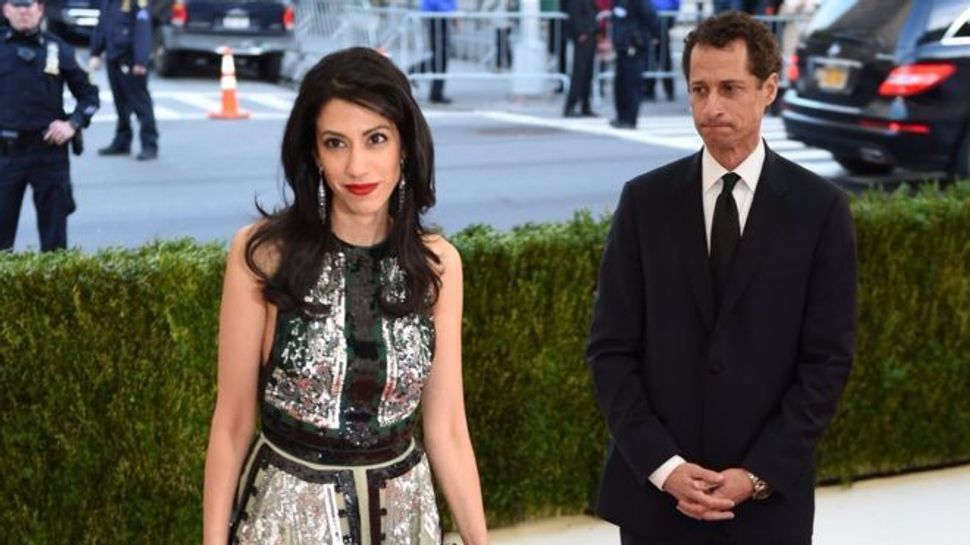 I ’m a Jewish feminist, blessed with a long and happy marriage, but I know enough to know that an outsider can never really know what happens between two people in an intimate relationship, so I try very hard not to judge.

Yet sometimes I can’t help myself. It happens to many of us. For all the advances women have made in the last century, our society is still widely ambivalent and frequently hypocritical when it comes to defining what the Good Wife is and how she should behave. Huma Abedin is just the latest, lurid example.

Abedin — an accomplished professional who is so close and loyal to Hillary Clinton that she has been described as a surrogate daughter — announced yesterday that she was leaving her husband, the former Congressman and evidently still-texting Anthony Weiner. Finally, I expect many of you thought. (Okay, that would include me.) That she stayed so long with a husband dumb enough to text photos of his aroused crotch to women around the country, and then do it again, and then, even after he was caught, do it yet again, must say something about her, right?

Is she a woman of forbearance, who kept her marriage together for the sake of her young son, even with the attendant humiliating costs? Or is she a hopeless, lovelorn, desperate enabler? Did she really think she could rise above it all? Or did she follow her boss’s example to stand by her man long after her wedding vows had outlived their expiration date?

You know it wouldn’t take long for the ever-tactless Donald Trump to offer his own infuriating and insulting comments. First he said that “Huma is making a very wise decision” to leave her husband, whom he claimed to have known well. But then, with no evidence, he asserted that that the Abedin/Weiner marriage was really a sign of Clinton’s bad judgment and could have put the country’s security at risk if Weiner had access to classified information.

As Ruth Marcus wrote in The Washington Post: “The notion that her aide’s conduct of her marriage reflects poorly on Clinton — and, even more, that national security was potentially ‘greatly compromised’ — would be laughable if it weren’t so sickening.”

But we can dismiss Trump’s outlandish remarks and still acknowledge the deeper conundrum here: Why does Weiner’s conduct raise questions not only about his character, but hers?

Because, when it comes to public officials, we still hold the aggrieved wife to impossibly high and conflicting standards. We stubbornly cling to the notion that a wife both reflects and is somehow partially responsible for her husband’s bad behavior.

I’m putting this in gendered terms because I’m hard pressed to find examples of political women who have behaved so badly that their spouses were forced to be “Good Husbands.” In one exhaustive list of federal political sex scandals, beginning with Alexander Hamilton’s now famous affair with a married woman, there is only one female entry — of a member of Congress who admitted to having an affair with a married man before she was an elected official and while she was single. There wasn’t even a husband or partner to be “good.”

In modern politics, it is Hillary Clinton who has been subject to the contradictory expectations of the Good Wife for decades, even before her husband’s inexcusable Oval Office trysts with Monica Lewinsky. To this day, there are those who admire her willingness to stoically stick with him and those who suspect that their marriage of convenience was suited to her political ambitions, as well. And there are women who resent the way Clinton sought to characterize and shame the many women, Lewinsky included, who had affairs with her husband.

During Bill Clinton’s impeachment in the late 1990s, I remember feeling all those emotions about the First Lady at one time or another — combined with a sense of sadness and disgust that our political discourse was consumed with something so sordid.

Yet here we are again, peering behind the curtains and beneath the sheets, passing judgment on other people’s terrible choices, and still unable to separate a wife’s reputation from her husband’s bad behavior. Men continue to be excused — look at how sainted Bill Clinton has become — and women continue to be held to standards that no mortal can meet. My guess is that Anthony Weiner will somehow reemerge on the public stage and that Huma Abedin will be scarred forever.

Anthony Weiner, Huma Abedin and What It Means To Be ‘The Good Wife’