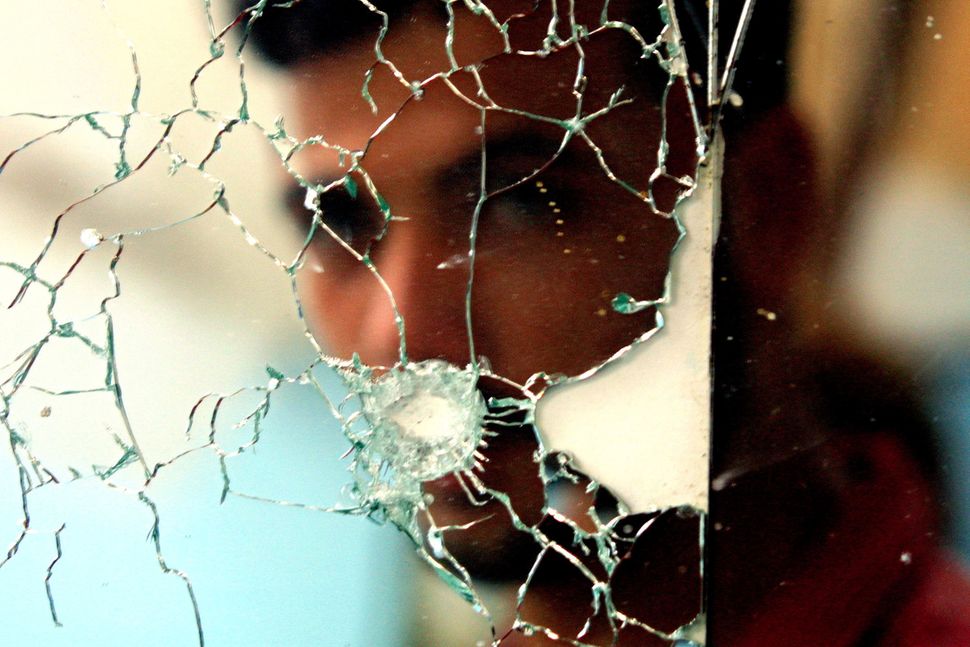 Jews, given our history, are accustomed to being targeted by someone else — marauding Christians, genocidal Nazis, Palestinian terrorists and the Ku Klux Klan, to name a few culprits. The exceptions, the times when a Jew terrorized another Jew, often occurred in a recognizable political context, such as the tragic 1995 assassination of Yitzhak Rabin by a crazed ideological opponent.

But it is difficult to fathom the purpose behind the bomb threats that disrupted the operations and brought fear to nearly half the community centers around the country, places that serve Jews and non-Jews alike. It would only be speculation at this point to explain his motive.

That is why so many of us, myself included, initially traced the source of the JCC threats to the ultra-white nationalists who have emerged “out of the sewers,” to use former Anti-Defamation League director Abraham Foxman’s words, since last year’s shameful presidential campaign.

It made eminent sense to see those threats on a continuum, which began with the well-documented harassment of Jewish journalists and grew into the desecration of Jewish cemeteries and Nazi-style graffiti on the walls of schools and universities.

Jews are used to viewing the world as “us” versus “them.” It’s an understandable impulse, ingrained by teachings, admonitions and raw experience.

Now what? The fact that an Israeli American is charged with these acts is confusing, infuriating and, yes, deeply embarrassing. It feels like a plot twist in a barely believable novel.

Much of the initial response to the arrest of the Israeli, identified in American media reports as Michael Kaydar from the southern city of Ashkelon, noted that the young man had a brain tumor along with some sort of cognitive impairment and mental health issues. His lawyer told Israeli media that he had a “very serious medical condition” that might have effected his bizarre and dangerous behavior.

His situation must be viewed with compassion, absolutely, but I am troubled by this excuse. Kaydar’s motives may have been effected by his illness, but his technical adeptness certainly was not.

If the reports are correct, Kaydar had gone to great lengths to disguise his voice and his whereabouts, employing an array of technologies that made his work undetectable for months. This indicates a level of premeditation, and technological care, that lifts his alleged actions way above those of a disturbed teenager making robotic calls as a youthful prank, or a mentally ill person acting without really thinking.

Worse, Israeli TV reports speculate that Kaydar was rejected for military service and that he concocted the bomb threats as a kind of revenge, drawing worldwide attention to his secretive work until a global hunt unmasked him.

And even worse, Haaretz just reported that Kaydar had been making cyberattacks for two years, but his case wasn’t given priority until pressure from the Trump administration, which until now had been rightly criticized for its long reluctance to condemn and confront anti-Semitism. Prime Minister Benjamin Netanyahu abetted that reluctance, which raises this uncomfortable question: Did Israel drag its feet on investigating the cyberattacks because the instigator was another Israeli?

Mental illness is too facile an explanation here. There are many things that a sick and rejected person could do to lash out at the Israel Defense Forces, but Kaydar’s choice of a target is bizarre and telling. His actions are those of a lone wolf, but this terror comes from a culture of disrespect and intolerance that has given social permission, here and in Israel, for hateful and discriminatory discourse, including against other Jews.

They don’t always hate us. Sometimes, we hate each other, and lash out at each other. We can’t simply blame other people. We have to consider what we are doing to ourselves.

But if a Jew can commit anti-Semitic acts, as appears to have happened in this case, how do we know who the real enemy is?

This heartbreaking story should leave us all chastened. I’ll include myself here. I won’t apologize for assuming that the JCC bomb hoaxes fit into a surging pattern of anti-Semitism triggered by a presidential campaign that targeted many minorities and unleashed an ugly, ethnically marked and religiously defined ultra-nationalism that has found a home in the White House. The teenager from Ashkelon could not have possibly defaced a cemetery in Philadelphia, or shot at a synagogue in Indiana. The domestic threat remains real.

Kaydar’s arrest, however, has reminded me again not to jump to conclusions. In the current American context, the arrest should further remind all of us that while anti-Semitic incidents are growing, Jews remain an admired minority in this society. We don’t need to crouch in the corner in fear.

The sad truth is that we are not immune to terror from within. The enemy may wear Nazi insignia, or a white sheet, or a kaffiyeh. Or he may be a Hebrew-speaking kid who has a fancy computer and who, for twisted reasons known only to him, joins a long list of those who wish to target and disrupt innocent Jewish lives.