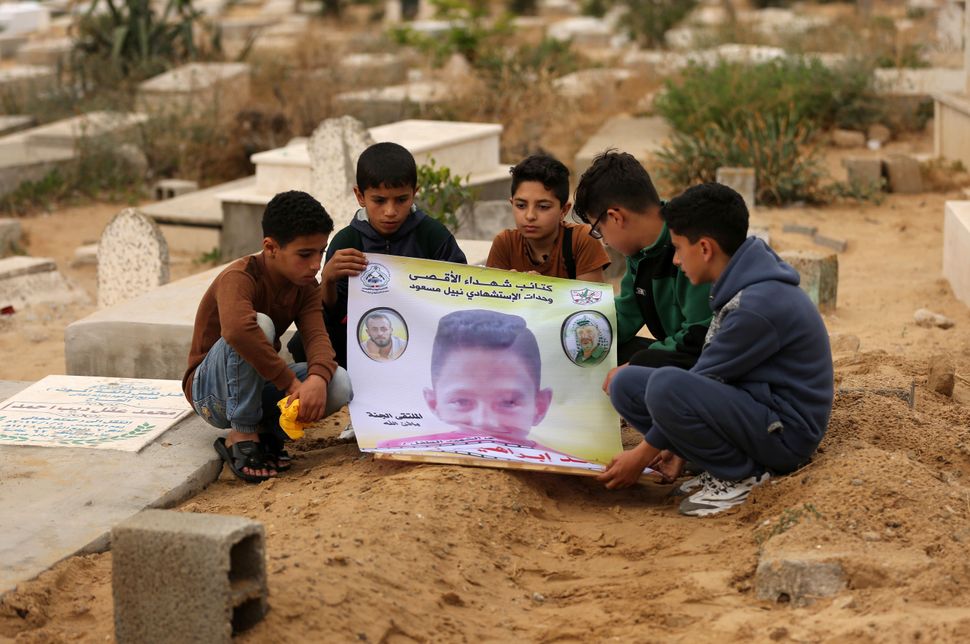 You can find some of our other opinions about the conflict in Gaza here and here.

Sixty Palestinians in Gaza were killed by Israel in one day this week, along with over 2,400 injured. As each day passes, the public justifications for their deaths have grown louder and louder: that the killed were members of Hamas, that Israel was acting in self-defense, that these deaths were deliberate ploys to make Israel look bad. No matter that the killed and maimed included, heartbreakingly, medics, journalists, and children. No matter that being a member of Hamas does not, in any legal or ethical way, justify an extrajudicial death sentence.

Despite these attempts to dehumanize and blame people for their own deaths and injuries, at a grassroots level, the Jewish American community is in an uproar of outrage, grief and overwhelming disquiet. Most people fundamentally understand that it is not only simply not possible to justify these deaths, but that the root causes beneath them require a serious re-evaluation of Israel’s ongoing power and control over Palestinian lives.

It is painfully compelling to focus on the death and terrible injuries suffered in the last few days. But for Palestinians, this day of horror was only the latest of many, most recently the two wars on Gaza in 2009 and 2014 and the ongoing eleven year siege of the Gaza Strip imposed by Israel with the support of Egypt.

In fact, Palestinians in Gaza had begun what was dubbed their #GreatReturnMarch six weeks earlier. It had always been intended to culminate this week, when Palestinians commemorate the 70th anniversary of the Nakba, or catastrophe, when 450 Palestinian villages were destroyed and over 750,000 Palestinians became refugees through force and fear as Israel became a state. Seventy percent of current residents of Gaza have refugee status, but cannot leave the Gaza Strip or return to their ancestral homes.

We must honor—and grapple with—why Palestinians were braving Israeli snipers in the first place: for the basic rights of dignity and freedom.

The first day of the #GreatReturnMarch coincided not only with what Palestinians call Land Day, in commemoration of Palestinian citizens of Israel who were killed in 1976 protesting about their loss of land and rights – again, part of the ongoing Nakba – but also with the first evening of Passover, when those of us in the Jewish community each year tell the story of our journey from slavery to freedom in ancient Egypt. We are taught that in each generation we must remember that we once were slaves, and that that awareness bequeaths us an extra responsibility to fight for the freedom of all people.

For many of us, despite all of our efforts to distinguish between Israel, the state, and the Jewish people, the re-telling of the Passover seder felt painfully hypocritical this year. How could we proclaim the value of fighting for freedom at our Passover table while Israeli soldiers that very day had shot over a dozen unarmed protesters who also simply wanted their freedom?

As the weeks have passed, that feeling has only intensified. And more and more people, Jewish and non-Jewish, are feeling compelled to speak out. In the last week, everyone from Bette Midler to Ava DuVernay to Judd Apatow have spoken up on Twitter. Jewish Voice for Peace has organized 60 demonstrations and counting in cities across the country to give voice to our outrage.

Over a dozen representatives in Congress, including the chairs of the Progressive Caucus, have expressed their alarm. Not a single federally elected Democrat has expressed support for Israel’s conduct, in contrast to four years ago, during the last Gaza war, when Israel had widespread bipartisan support. On Tuesday, the Pew Research Center published data showing that members of the Democratic party are now split between aligning with Israel or Palestinians, while even two years ago a solid plurality aligned with Israel.

The grassroots progressive democratic powerhouse MoveOn.org put out a very strong call to action to Democratic leaders, and global powerhouse Avaaz called for sanctions on Israel for the first time.

But we all know that in this age of Trump, when we lurch from crisis to crisis, that very soon much of the world will move on. And from long experience, I know that we need not just demonstrations in the street in times of crisis, but long-term campaigns, patient organizing, and hard conversations inside our own communities.

In 2005, Palestinian civil society called for global solidarity through Boycott, Divestment, and Sanctions (BDS). Modeled in part on the anti-apartheid movement in South Africa, BDS is an opportunity for all of us in our own communities to educate ourselves and others and take action for the long haul. The Boycott National Committee (BNC), called for military embargos in the wake of the killings in Gaza, and we have a platform to do just that in the U.S. by calling for an investigation through the already existing Leahy Law, which calls for U.S. military aid to be predicated on it not being used in human rights violations.

For many people, especially in the Jewish community, taking the leap to support BDS can be frightening. It feels like a drastic step, and mainstream Jewish organizations do their best to impose a cost on those who do.

But for those who have been hesitating, now is the time. Israel, as a state like any state, is not exempt from critique and pressure. In fact, as the largest recipient of military aid in the world from the United States, all of us as Americans have an obligation to pressure our own government to cease its unconditional support, and this is one of the most effective ways to do so.

For me, being part of the BDS movement is my way of enacting Jewish continuity and the obligation to remember our history and re-consecrate ourselves in every generation to the struggle for freedom. If Palestinian safety and freedom is to be taken as seriously as any other people’s, the necessity of jumping off the sidelines, now more than ever, is clear.

Rebecca Vilkomerson is the founder and director of Jewish Voice for Peace.