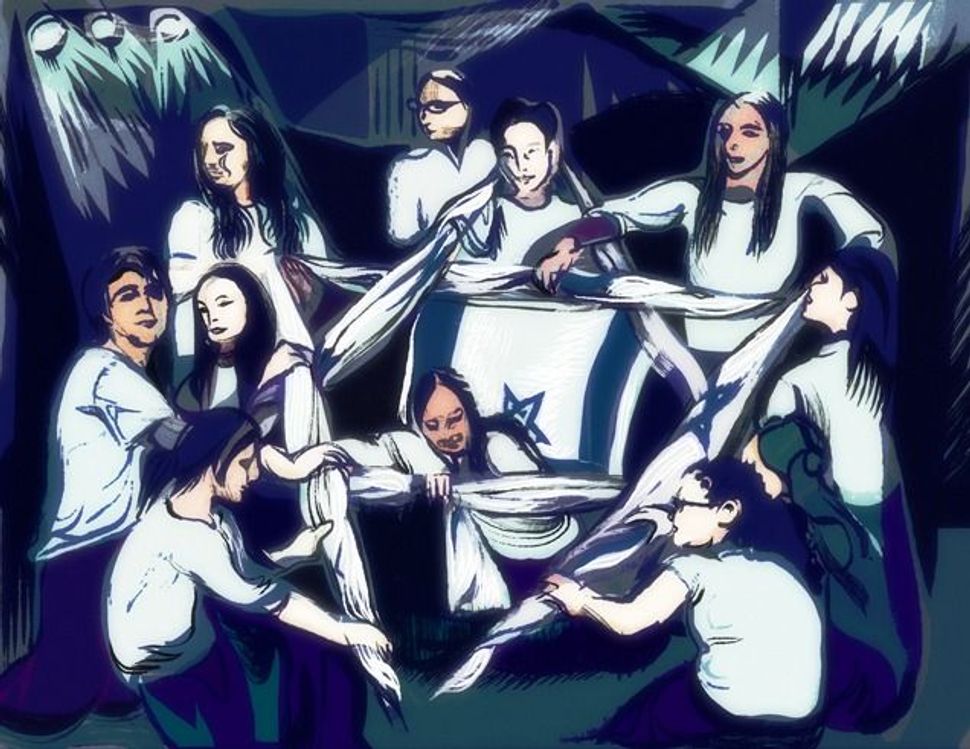 I first heard complaints about Ashkenormativity in March 2009, five or six years before the term was apparently coined.

I was attending a conference in Chicago for young Yiddish speakers and college students interested in studying the language. While explaining how learning Yiddish as a teenager and young adult (at the time I was only twenty) gave me a more complete understanding of what it meant to be Jewish, a woman interrupted me. “And what about Ladino?” she asked.

I responded that as an Ashkenazi Jew whose roots are in Eastern Europe, Yiddish was my ancestral language. Upon hearing this, she interrupted me again, this time yelling that by promoting Yiddish, I was further marginalizing other diasporic Jewish languages and cultures, which have even fewer resources and far less support than Yiddish and are therefore less privileged.

I was dumbfounded. I’d never been interrupted and scolded while giving a talk at a conference before and had had very few encounters with identity politics, which was just beginning its noisy resurgence on college campuses. I tried to mollify my heckler by explaining that I was also a supporter of Ladino and believed that the traditional language of Sephardic Jewry was, just like my own ancestral tongue, part of a valuable cultural heritage.

If a similar incident were to happen today, I’d explain that those of us who grew up speaking Yiddish or chose to learn it as a second language often have a better grasp of the importance of Ladino, Bukharian, Judeo-Tat, Judeo-Arabic and Judeo-Aramaic than those who know only Hebrew or, like most American Jews, no Jewish language at all.

Like Yiddish, the vocabulary and idioms of these diasporic Jewish languages represent a cultural synthesis between the Jewish and non-Jewish spheres. They embody a unique mixture of the holy and profane, which characterized how Jews saw the world for generations and are the wellspring through which Jewish culture and religious teaching was transmitted.

Today I’d argue that only someone who knows one of the languages of the Jewish disapora can fully appreciate the importance of the others. But in 2009 I had yet to come up with this theory, which the practitioners of identity politics might call, only half-jokingly, “diasporic Jewish linguistic intersectionalism.”

Over the past ten years I’ve heard a growing chorus of complaints, almost exclusively from fellow Ashkenazi Jews, that Yiddish “harms” the other languages of the Jewish diaspora. Some of these same people have also argued that Ashkenazi Jewish traditions and Yiddish make those who do not have Eastern-European roots feel unwelcome in the American Jewish community.

Nearly all who raise such concerns are supporters of the term “Ashkenormativity,” i.e. the belief that most Jewish educational institutions, Jewish community centers and Hillels assume that all American Jews are exclusively of Ashkenazi heritage and privilege the Ashkenazi Jewish experience.

This complaint is, in this limited form, justified. At least 80% of American Jews are of Ashkenazi descent and the traditions of other Jewish ethnic groups are too often unfairly forgotten and ignored by Jewish institutions. Worse still, some people in the American Jewish community actively belittle these traditions. Such instances need to be condemned and all Jewish cultural traditions ought to be honored, represented and treasured.

I take umbrage, however, with the argument put forth by some of the same proponents of the term “Ashkenormativity” that my advocating for Yiddish hurts the wellbeing of other diasporic Jewish languages and cultures while they don’t reckon with a much greater danger for these cultural traditions: “Israel-Centrism.”

By “Israel-Centrism” I mean the fact that nearly all mainstream Jewish institutions in America outside of the Hasidic world largely ignore all forms of Jewish cultural identity that aren’t connected to Israel. Besides religious and secular studies, nearly all Jewish day schools that teach any secular Jewish cultural content (and many don’t!) only expose their students to modern Israeli Hebrew, Israeli history and Israeli foodways. Israeli culture has become so dominant in American Jewish day schools that a study by the Avi Chai Foundation called Israel the “glue that holds school communities together” and outside the Orthodox sector the “single most important Jewish common denominator binding school families together.” This, despite the fact that the vast majority of American Jewish families are not of Israeli descent and modern Israeli Hebrew (as opposed to Biblical Hebrew and Talmudic Aramaic) is not part of their cultural heritage.

Not only do these day schools not teach Yiddish (let alone Ladino or Bukharian etc.), but they mostly skip over the entirety of Jewish history from the time of Maimonides until the founding of the modern state of Israel with exceptions made only for the American immigrant experience and historical calamities such as the Crusades, the Spanish inquisition and the Holocaust. Such key aspects of our communal heritage like the Haskalah (Jewish enlightenment), the rise of secular Yiddish and Hebrew literature, the history of Jews in Poland, Ukraine or Turkey and the music and art created in those places are either touched upon in an extremely cursory fashion or skipped entirely.

Jewish day schools are just the tip of the iceberg. In addition to the hundreds of millions of dollars spent by the Jewish community so that young Jews can go on Birthright and experience Israeli culture, American Jewish institutions and donors spend colossal sums of money on summer camps, where teaching about Israeli culture and learning Hebrew phrases and songs is a key component. Then there are the university Hillels where resources for Israel-related programming, including full-time dedicated staff members, dominate other priorities, Israeli food and dance festivals, Israel Day parades, and a plethora of Israel-focused youth groups.

But money and resources for Yiddish, Ladino, Bukharian and the other languages of the Jewish diaspora? Almost nothing. The few organizations dedicated to supporting the languages and cultures of the diaspora are either independent non-profit organizations that receive little to no funding from the mainstream Jewish institutional world and its funding networks or non-Jewish universities that offer classes in Yiddish, and occasionally, Ladino.

And yet, despite Israeli culture’s extraordinarily privileged position in American Jewish life, some people still claim that Yiddish is also privileged thanks to “Ashkenormativity” and therefore threatens the well-being of other Jewish cultures.

The tragic irony here is that those who correctly argue that American Jews far too often don’t respect how Mizrahi Jews pronounce biblical Hebrew or only mention latkes and never keftes due to the American-Jewish community’s Ashkenormativity don’t seem to recognize just how culturally un-Ashkenazi most Ashkenazi Jews are.

Reform, Conservative, and nearly all liberal modern Orthodox synagogues, where the congregants are predominantly or exclusively Ashkenazi, do not teach children to pray using the centuries-old traditional pronunciation of their ancestors but rather according to the Israeli style. Most of these congregants who keep kosher eat in restaurants where one is far more likely to find falafel, pita and even sushi, than a traditional Eastern-European Jewish dish. And if you ask the average non-Haredi synagogue-going Ashkenazi Jew what Jewish cultural activities they’ve participated in recently you’re far more likely to hear that they’ve attended an Israeli folkdance, played “ga ga” or watched an Israeli TV show, than done anything related to Ashkenazi culture.

In short, for most American Ashkenazi Jews outside of the Hasidic world who feel a strong connection with a Jewish culture (likely a minority unto itself!), that culture is more often Israeli than Ashkenazi. Assimilation, on the one hand, and “Israel-Centrism” in Jewish day schools and other mainstream Jewish institutions, on the other, have led to a situation in which Modern Israeli Hebrew has replaced Yiddish as the language, with which most unassimilated American Jews outside of the Hasidic world express their ethnic identity.

I’m not saying by any means that Modern Hebrew shouldn’t be taught in Jewish day schools or that Israeli history and culture should be skipped over in favor of diasporic Jewish culture. Israel is the largest Jewish community in the world and its history, language and culture should be an integral part of any Jewish education.

But let’s stop pretending that Israeli culture is the only legitimate Jewish culture and let’s stop ignoring the Jewish languages and cultures of the diaspora along with the bulk of Jewish history. Just as “Ashkenormativity”, i.e. assuming that all Jews are Ashkenazim, is rightfully criticized, so too should we not permit mainstream Jewish institutions to assume that all Jews identify exclusively with Israeli culture. It would be great, of course, if some Jewish day schools taught Yiddish or Ladino or Bukharian or added more lessons on the history of Jews in the diaspora. Such classes wouldn’t negate Israeli Hebrew but rather help to better contextualize the Israeli experience as Israelis are, like American Jews, descendants of diaspora Jews who lived their lives in these languages and cultures.

At a time when the chasm between the ideals of many young American Jews and the policies of the Israeli government has grown so wide that some now consider the Jewish state an impediment to their Jewish identity, “Israel-centrism” can even be counter-productive. Young American Jews must be given more ways to connect to their roots. Diasporic Jewish languages and cultures are a good way to involve those who don’t identify with the politics or culture of Israel or with Jewish religious tradition.

We supporters of Yiddish are not the people threatening the future of Ladino, Judeo-Arabic, Bukharian and the other languages and cultures of the Jewish diaspora. Not Ashkenormativity, but the nearly exclusive focus by American Jewish institutions on Israeli culture, history and modern Hebrew at the exclusion of all other Jewish cultures, is the real threat.