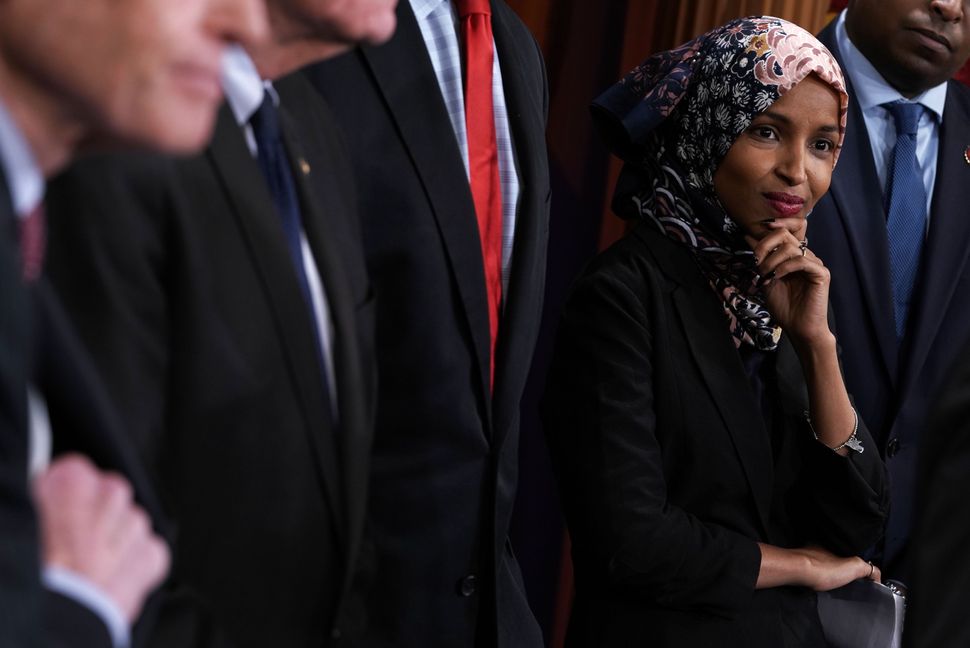 The following two things are true. First, Representative Ilhan Omar was wrong to tweet that the American government’s support of Israel is “all about the Benjamins.” Secondly, she’s being judged by a grotesque double standard. Her fiercest critics in Congress are guiltier of bigotry than she is.

Omar’s tweet was inaccurate. Yes, of course, AIPAC’s influence rests partly on the money its members donate to politicians. But it also rests on a deep cultural and religious affinity for Israel among conservative white Christians, who see the Jewish state as an outpost of pro-American, “Judeo-Christian” values in a region they consider hostile to their country and faith. (American conservatives have long admired small, pro-American countries in regions dominated by America’s adversaries: Think of the right’s affinity for “captive nations” like Lithuania, Latvia and Poland during the cold war, and its historic affinity for apartheid South Africa and Taiwan).

Omar’s tweet was also irresponsible. It was irresponsible because leaders should understand that their words carry historical baggage. Accusing a largely (though not officially) Jewish organization like AIPAC of buying politicians is different than accusing the NRA or the drug industry of buying politicians because modern history is not replete with murderous conspiracy theories about how gun owners and pharmaceutical executives secretly use their money to control governments.

But if we’re going to demand that politicians apologize for any hint of association with bigotry, let’s not stop with Ilhan Omar. Let’s hold her critics to the same standard.

Establishing two legal systems in the same territory—one for Jews and one for Palestinians, as Israel does in the West Bank—is bigotry. Guaranteeing Jews in the West Bank citizenship, due process, free movement and the right to vote for the government that controls their lives while denying those rights to their Palestinian neighbors is bigotry. It’s a far more tangible form of bigotry than Omar’s flirtation with anti-Semitic tropes. And it has lasted for more than a half-century.

Yet almost all of Omar’s Republican critics in Congress endorse this bigotry. The 2016 Republican platform declares that, “We reject the false notion that Israel is an occupier” in the West Bank. In other words, governing Jews by one set of laws and Palestinians by another is fine. Last December, Republican Congressman Lee Zeldin, who has called for stripping Omar of her committee assignments, spoke at a fundraiser for Bet El, a West Bank settlement from which Palestinians are barred from living even though it was built—according to the Israeli supreme court—on land confiscated from its Palestinian owners.

For her tweets, Omar was publicly rebuked by the entire Democratic House leadership. For his enthusiastic endorsement of land theft and state-sponsored bigotry in the West Bank, Zeldin has received no congressional criticism at all. To the contrary, he’s a Republican rising star.

So is bigotry against Muslims. When Donald Trump in December 2015 proposed banning Muslims from entering the United States, his support among Republicans increased.

In 2006, Roy Moore wrote that Muslims wishing to swear their oath of office on a Koran should be barred from Congress. His campaign spokesman reaffirmed that this was Moore’s view in 2017.

The Republican National Committee backed Moore’s Senate campaign nonetheless. In 2013, then Congressman Mike Pompeo falsely accused “Islamic leaders across America” of failing to condemn the Boston marathon bombings and then claimed that this (fictitious) “silence…casts doubt upon the commitment to peace among adherents of the Muslim faith.”

In 2016, Pompeo accepted an award from ACT for America, which scours textbooks to eliminate any positive references to Islam and agitates against the sale of halal food. Two years later, every Republican Senator (except John McCain, who wasn’t present) voted to make Pompeo Secretary of State.

None of this justifiesOmar’s tweet. What it justifies is suspicion about the motives of her fiercest congressional critics. Were the Republicans denouncing Omar sincerely opposed to bigotry, they would not reward bigotry against American Muslims and celebrate bigotry against Palestinians in the West Bank.

Were the Republicans denouncing Omar even sincerely opposed to anti-Semitism, they would not support Donald Trump. Trump, after all, in 2013 tweeted that “I’m much smarter than Jonathan Leibowitz—I mean Jon Stewart.”

He ran for president on a slogan laden with anti-Semitic associations from the 1930s: “America First.” In 2015 he told a Jewish audience that “You’re not gonna support me because I don’t want your money… you don’t want to give me money, but that’s ok, you want to control your own politicians that’s fine.”

In 2016 he retweeted an image of Hillary Clinton surrounded by money and a Jewish star. He closed his presidential campaign with an ad that showed three Jews—Janet Yellen, Lloyd Blankfein and George Soros—alongside language about “global special interests” that “control the levers of power in Washington.”

In 2017, he said there were “very fine people” among the neo-Nazis who marched in Charlottesville. And in 2018, his racist fear mongering about a caravan of Central American migrants provoked a Pittsburgh man to commit the worst anti-Semitic atrocity in American history. Unlike Omar, he has not apologized for any of this.

If you denounce Ilhan Omar but support Donald Trump, you don’t really oppose bigotry. You don’t even really oppose anti-Semitism. What you oppose is criticism of Israel. That’s the real reason Republicans are so much more outraged by Omar’s tweets than by Trump’s. They’re not trying to police bigotry or even anti-Semitism. They’re using anti-Semitism to police the American debate about Israel.

Ilhan Omar foolishly played into their hands. She needs to understand that, thanks to this unfair double standard, when it comes to anti-Semitism, critics of Israel must be beyond reproach.

I’m happy that Ilhan Omar apologized. I’ll be even happier when Lee Zeldin apologizes too.