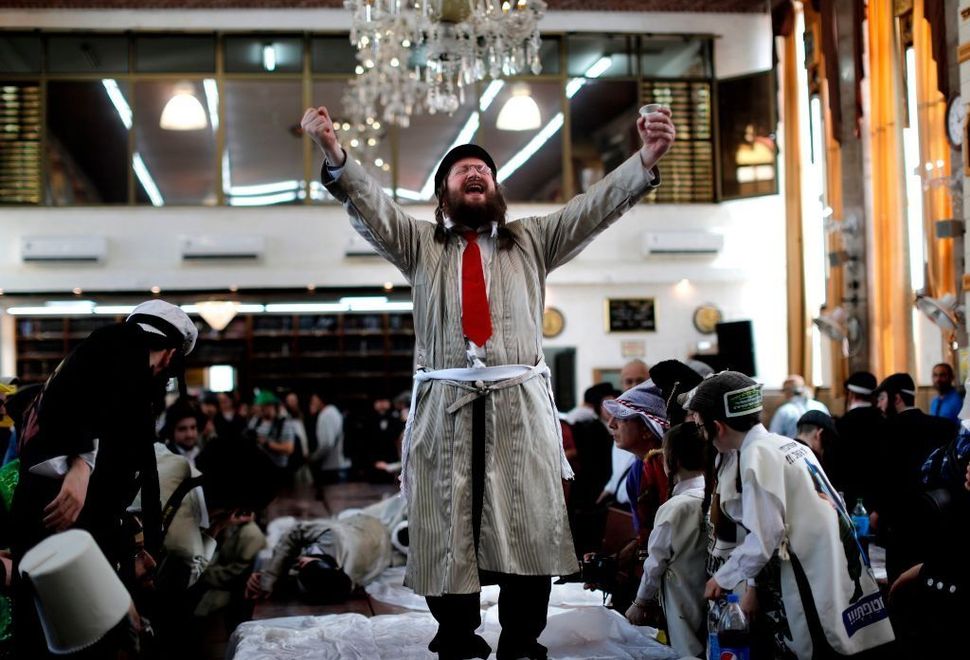 Just days after the horrific terror attack against Muslims during prayer at mosques in New Zealand left fifty dead, it’s not possible to call this a good week. But it’s also the week of Purim, when Jews traditionally find reasons to be happy even when happiness feels illusive. Beautiful things did happen this week, many of them. Let’s take a look:

Showing up for Muslims: In Toronto on Friday, Jewish communities formed a “ring of peace” around mosques as families entered to pray. This week in Manhattan, Jews from LGBTQ-focused Congregation Beit Simchat Torah lined up outside a local mosque to form a welcome path for prayer goers. Uptown, Jews decorated the exterior of a Washington Heights mosque in support. Insider reports that Florida, Maryland, Wisconsin, British Columbia, and England Jews visited mosques and stood in support with Muslim worshipers.

“We feel compelled to come to the aid of those communities, just as our Jewish community was so compassionately supported only a few short months ago by people around the world of many faiths,” wrote Pittsburgh’s Tree of Life synagogue, before raising over $40,000 to aid shooting survivors and victims’ families in Christchurch. You can still give to support Christchurch through the The New Zealand Islamic Information Centre or through the Jewish Federation of Greater Pittsburgh.

Argentinian eco rabbi: Meet Sergio Bergman, Argentina’s Secretary of the Environment, a rabbi at the country’s oldest synagogue, and newly considered one of the top 100 actors on climate change by Apolitical. He shares the title with the likes of Michael Bloomberg, Al Gore, and Naomi Klein. Rabbis: they do it all.

Kavod for Holocaust survivors When John and Amy Israel Pregulman met, they made a commitment to “Kavod,” the Hebrew word for respect. The couple fell in love and ultimately married while working for their two-person organization, which is dedicated to photographing, documenting, and caring for every living survivor of the Holocaust. Kveller reports that from Prague to Tokyo, they have captured the images of almost 800 survivors, and distributed donations to over 1,000. One-third of Holocaust survivors are living in poverty. The Pregulmans give survivors donations via gift card, because “anyone could go into a grocery store with a gift card and no one would make them feel like they were different,” Amy says. Even survivors who are themselves in need like to give back to the couple, John says. “Inevitably, after you take an elderly lady’s picture she wants to give you something to eat, like your grandmother would.”

Shabbat observant? Welcome to Broadway: The great white way welcomes the shabbat bride in more ways than one in the smash-hit Yiddish production of “Fiddler on the Roof,” the first ever Broadway show to accommodate pit musicians who cannot work on Shabbat. The Forward reports that a union representative for the musicians fought for religious rights in weeks of negotiations with Broadway producers, ultimately allowing three Shabbat-observing performers to use substitutes during popular weekend performances. “After conducting the show five times a week it’s poignant for me to go home on Fridays and know that several hundred New Yorkers are spending Shabbos seeing Fiddler,” said Zalmen Mlotek, the show’s conductor and the Artistic director of National Yiddish Theater-Folksbiene, who observes the practice of not working on Shabbat. “That’s their Shabbos.”

Alex Bregman makes Jewish sports history: Astros slugger Alex Bregman (you know him and love him from our previous coverage) made history this week by signing what is thought to be the most lucrative contract in history for a Jewish athlete — for six years and $100 million — with the Houston Astros.

Molly — Hell — Yeh “Completely verklempt to be nominated for an Emmy” wrote Forward favorite-turned world favorite Molly Yeh this week. The beloved chef, baker, and media personality has been nominated for a daytime Emmy Award for best host for outstanding Food Network show “Girl Meets Farm.” In it, Yeh, a Jewish Chinese-American transplanted to her husband’s Minnesotan farm, serves up delicacies from blueberry cream cheese hamentaschen to tahini milkshakes. And did we mention she did it all while pregnant? The whole idea makes us want to lie down with a platter of her pastrami egg rolls and have a good think.

completely verklempt to be nominated for an emmy!!! ???? i am in the category of best culinary host with women i admire so freaking much: @patijinich, @wolfiesmom, @giadadelaurentiis, @catherinefulvio_chef ok i’m literally crying now wow pregnancy hormones plz simmer down ???? i love making #girlmeetsfarm and the team i get to work with is amazing ❤️ thank you guys sooo much for your support and for watching #girlmeetsfarm @foodnetwork!!!! ??‍???‍???‍???‍?❤️❤️❤️❤️ (? @chantell_lauren) @daytimeemmys #daytimemmys #emmys

Celebrating all abilities: Amy Schumer, not a lady known for her sensitivity, made headlines this week for openly discussing and joyfully celebrating her husband Chris Fischer’s autism-spectrum disorder in her Netflix standup special, “Growing.” In a humorous segment lauded by autism and mental health advocates for its candid take on the disorder, Schumer said, “Once he was diagnosed, it dawned on me how funny it was, because all of the characteristics that make it clear that he’s on the spectrum are all of the reasons that I fell madly in love with him.” She laughed. “He keeps it so real.”

Torah: We’re really doin’ it now, Jews! We’re in Tsav, the second parsha (portion) of the third book of the Torah. Vayikra, or Leviticus, is a part of the Torah that’s known for it’s lack of narrative and its excess of information about how to kill animals to perk up an invisible but highly erratic voice in the sky. Yet! Take a look at this: The fire on the alter shall be kept burning, not to go out…A perpetual fire shall be kept burning on the alter, not to go out.

The Torah rarely thinks things are nice enough to say them twice, so when there’s word-for-word repetition we know to sit up and pay attention. The fire must never go out. So now we know Morrissey reads the Torah. But we also know that we need to keep the lights on. We need to keep the fire lit. We need a constant light, a constant fire, that burns for eternity, long after we’re gone.

Plus, stick with this book long enough and you’ll get some juicy stories about lepers and instructions to never eat a bat.

Keep it real this week, my friends.