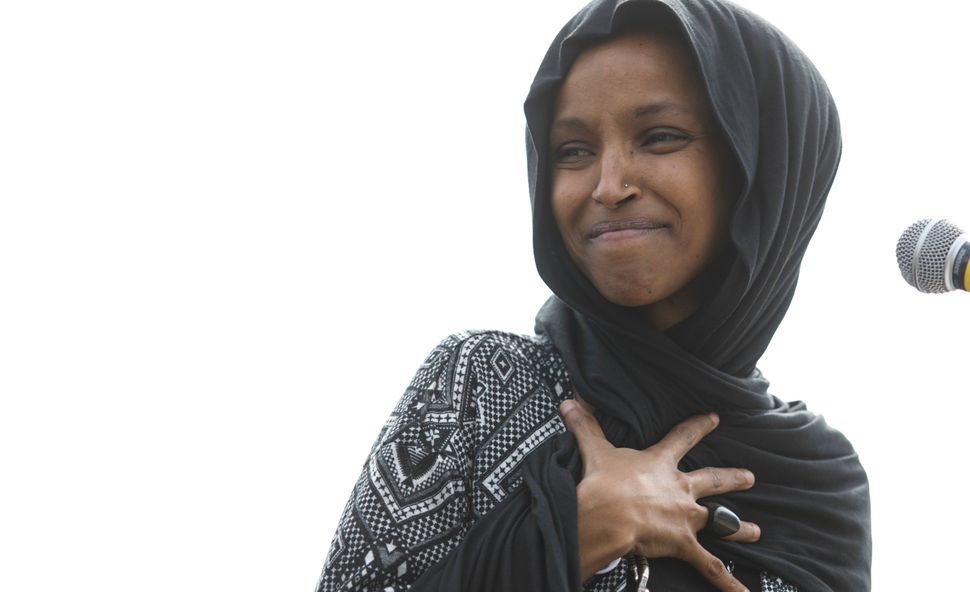 There is no doubt that Minnesota Democratic Rep. Ilhan Omar’s approach to the Israeli-Palestinian conflict is earning her plenty of attention. Her comments on Israel — such as claiming that U.S.-Israel policy is “all about the Benjamins” — have earned her support from some hard-left activists but also derision from many within her own party.

Witness how both the Speaker of the House Nancy Pelosi and the Senate Democratic Minority Leader Chuck Schumer used their remarks at the recent American Israel Public Affairs Committee (AIPAC) meeting to condemn her rhetoric on the Middle East conflict. Omar was also targeted by Israel’s right-wing Prime Minister Benjamin Netanyahu, who quipped, “From this Benjamin: It’s not about the Benjamins.”

Omar’s response to the denunciations of her rhetoric at the AIPAC meeting was emblematic of her approach to politics so far: she responded in kind, throwing punches and drawing attention to herself rather than the underlying policy issue. “It’s been interesting to see such a powerful conference of people be so fearful of a freshman member of Congress so I hope that they figure out a way to not allow me to have a permanent residency in their heads,” she told reporters.

.@IlhanMN strikes back at @AIPAC, telling Congressional reporters: “It’s been interesting to see such a powerful conference of people be so fearful of a freshman member of Congress so I hope that they figure out a way to not allow me to have a permanent residency in their heads.”

That surely makes for good Twitter fodder — a medium where a witty retort or personalized jab is often substitute for civil or constructive dialogue. But what does it actually do for the Palestinians trapped under an oppressive occupation, or Israelis who bear the brunt of terror attacks?

With the entire national media trained on her, Omar has repeatedly chosen to sling verbal arrows at Israel or its supporters in the United States, but has said next to nothing about the occupation of the Palestinian people.

With a New York Times reporter willing to transmit her words to the world, she could have, for instance, said, “A recent United Nations report found evidence of excessive force used by Israeli military units that led to the deaths of dozens of Palestinian protesters, including children. I would hope AIPAC would talk about this rather than me. I’m not the center of the story.”

It is likely that Omar is insulated from criticism by a fervent social media following that is quick to proclaim that she is being held to double standards and that pro-Israel activists would probably criticize her no matter what she says. Both of these things are true. There are few strident advocates for Palestinian rights in the US Congress, and their advocates have far less political power than advocates for the status quo.

But that isn’t a reason for Omar to be less careful – it’s a reason for her to be more careful and more precise. The reality is that polling consistently show Americans are for the most part friendly towards Israel and more Americans side with Israel in the conflict than side with the Palestinians. But polling also shows that Americans are increasingly critical of Israeli foreign policy and an increasing number of Americans would even support some form of sanctions aimed at curbing settlements.

The way Omar could reconcile these two facts is to focus on the suffering of Palestinians and focus on U.S. policy. She could write legislation, as Minnesota Democratic Rep. Betty McCollum has done, that would prohibit military aid to Israeli units that commit human rights abuses. She could host briefings that focus on the plight of Palestinian children, as has been done in the recent past. Vermont’s Independent Senator Bernie Sanders has used his social media operation to produce slick videos highlighting the plight of Palestinians in Gaza — something nobody is stopping Omar and her staff from doing.

All of this would make it clear to Americans that Omar is not simply disparaging Israel or its supporters in the United States — both of which would be deeply unpopular in America’s political culture.

Instead, she wants to change U.S. policy so that the freedom and security of both Palestinians and Israelis is given a fair consideration. Such an approach would be more politically wise and morally sound than her current tactic, which is to disparage Israel or its supporters and then play the victim when they respond in kind.

AIPAC and right-wing pro-Israel activists would prefer to have a national conversation about whether what a Member of Congress said is anti-Semitic rather than Israeli policy towards Palestinian children. Omar has played into their hands by making statements that offer up that conversation rather than focusing on the plight of the Palestinians.

I understand the challenges faced by a Muslim woman in the U.S. Congress. I myself am a Muslim-American in a society that is often deeply suspicious of Muslims, and Washington, D.C. can be a very difficult place to make arguments in favor of Palestinian rights.

I recall working at the Center for American Progress in 2010 and interviewing the first Muslim-American Rep. Keith Ellison about American foreign policy. After the interview, I got a tongue lashing from some higher ups at the think tank about how they didn’t want Ellison to be the public face of their commentary on drone policy. Although they didn’t explicitly say it was because he was Muslim, that was my takeaway.

But every uphill political struggle in history has succeeded only when social leaders thought strategically about what they wanted to accomplish. I was born and raised outside Atlanta, Georgia, a place that was once governed by a matrix of Jim Crow laws. That system of laws was dismantled because of the bravery of civil rights protesters who exerted such rigorous discipline that they were taught to not even flinch when mobs would jeer at them or physically assault them during lunch counter sit-ins.

If those brave men and women could endure that, then surely Omar can exert the willpower to put aside the Twitter barbs and focus on strategically elevating the plight of the Palestinians rather than making herself the center of attention.

Zaid Jilani is a journalist who hails from Atlanta, Georgia. He has previously worked as a reporter-blogger for ThinkProgress, United Republic, the Progressive Change Campaign Committee, and Alternet.