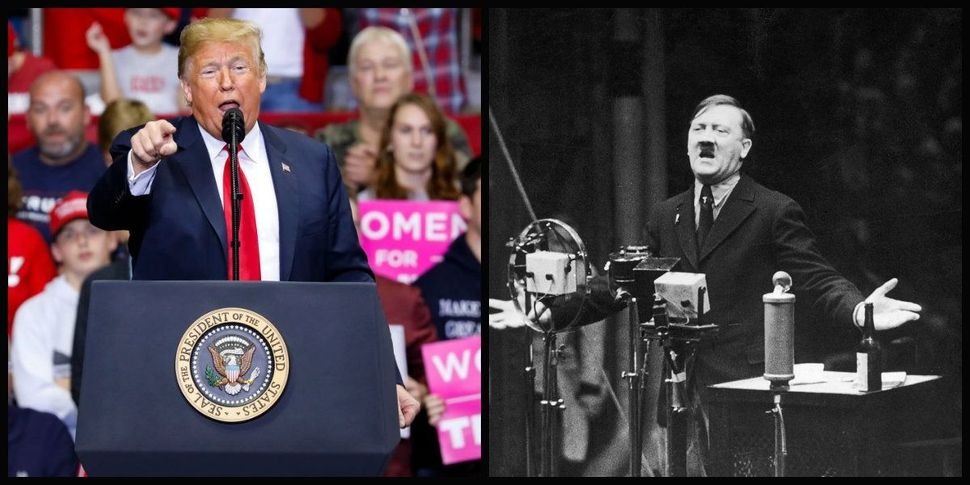 Donald Trump and Adolf Hitler, each giving a speech.

I hate to put Donald Trump and Adolf Hitler in the same sentence. It trivializes Hitler’s obscene crimes to compare them with Trump’s often pathetic foibles. And it understates our nation’s historic commitment to constitutional democracy to suggest a serious parallel between the twenty first century United States and 1930’s Weimar Germany.

But I can’t ignore the fact that Trump’s savagely divisive political rhetoric, both as a candidate and as our 45th President, closely tracks the tropes that Adolf Hitler used from 1932-36 to persuade a critical mass of the German people to trade their democratic birthright for a Nazi pottage of xenophobia, bigotry, and scapegoats.

Hitler did not take power by force. Germany dropped into his maw like a piece of overripe fruit spoiled by years of poisonous, corrosive rhetoric. The real risk to American democracy posed by Trump’s talent for invective and divisiveness is not a military putsch. It is the erosion of the bonds of mutual respect and common decency that hold constitutional democracies together.

One key to Hitler’s success in talking German democracy to death can be found in the Holocaust Museum in Jerusalem, where two small green plastic cubes rest almost unnoticed on small display tables—surviving examples of the miniature radios distributed free of charge by the Nazi Party in the years following 1932. There was only one catch: the free radios received only a single frequency—the unremitting, unadulterated voice of Adolf Hitler spewing his witches’ brew of bigotry and hate directly into the heads of 35-40% of the German people.

Trump’s mastery of Twitter is the twenty-first century analogue of those green plastic radios, forging a direct line of unfiltered communication with 40 million Americans, enabling Trump to stoke mass fears and foment divisive anger on demand

And it should not come as a surprise that Donald Trump is so adept at mimicking Hitler’s rhetoric. Trump studied at the feet of the master. We know from Ivana Trump’s now-sealed testimony at Trump’s first divorce trial that the young Donald slept with a copy of Hitler’s speeches, published in English in 1941 as “My New Order,” on his bed-stand.

Give Trump credit. He did his homework well and became a master of divisive rhetoric capable of unravelling the social fabric of a tolerant democracy. A comparison of the speeches collected in Hitler’s “My New Order” and Trump’s political rhetoric yields chilling parallels. Here are just a few.

Both Trump and Hitler waged war on the idea of objective truth, relentlessly disseminating a pastiche of lies and half-truths designed to persuade a populist jury of the Leader’s distorted version of reality. Hitler coined the term “lugenpresse” (lying press) to castigate the mainstream newspapers bent on exposing his lies. Trump insists that he is the target of “fake news” invented by a lying mainstream press. Hitler derided scientific experts who disagreed with his crackpot racial and economic theories. Trump attacks climate scientists and economists who disagree with his policies.

Hitler celebrated Aryan white supremacy, warning of a coming cultural Armageddon when the forces of the (white) West would be confronted by inferior hordes from the (non-white) East. Trump also warns of a coming, racially-tinged cultural Armageddon, never missing an opportunity to inject racial divisiveness into American life, even infecting Hurricane relief for Puerto Rico with racial overtones.

Both Hitler and Trump excelled at scapegoating. Hitler’s poisonous rants blamed Jews, Roma, and the “elites” for Germany’s problems. Trump blames Muslims, undocumented immigrants from Central America, and “the elites” for America’s problems.

Hitler hardened Germany’s border, restricting travel to and from the country, and engaging in trade wars designed to benefit German industry. Trump bans Muslims, wants to build a wall on the Southern border, and has initiated trade wars with China, India, Europe, Canada, and Mexico.

Hitler used the pretext of the Reichstag fire in 1933 to declare a “national emergency” justifying the exercise of unilateral Executive power. Trump has used multiple declarations of non-existent national emergencies to ignore Congress.

Hitler viewed women solely as wives and mothers, resisting the entry of women into the workforce. Trump may be the most openly misogynist man to serve as President, treating women as little more than sex objects and waging war on their reproductive freedom.

There’s no easy antidote to Trumpist vitriol. But it helps to recognize that Trump is playing at being a Sorcerer’s Apprentice, casting ugly and divisive spells that he does not understand and cannot control. The fate of German democracy shows us where those spells can lead unless we defend constitutional democracy in the only forum that really matters—the voting booth.

Burt Neuborne is the Norman Dorsen Professor of Civil Liberties and founding legal director of NYU School of Law’s Brennan Center for Justice and has participated in more than two hundred cases in the U.S. Supreme Court. Neuborne is the author of Madison’s Music and the forthcoming book When at Times the Mob Is Swayed: A Citizen’s Guide to Defending Our Republic (both from The New Press) and lives in New York.