It’s Time To Call Trump And His Team By Their True Name: Idolators. 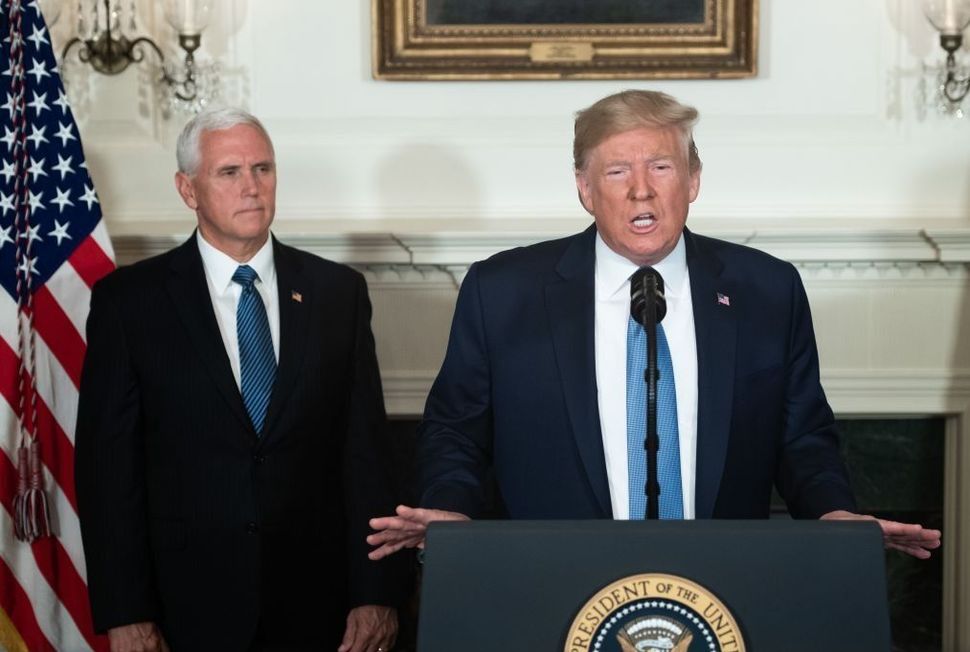 US President Donald Trump speaks alongside Vice President Mike Pence about the mass shootings from the Diplomatic Reception Room of the White House in Washington, DC, August 5, 2019. - US President Donald Trump described mass shootings in Texas and Ohio as a “crime against all of humanity” as he addressed the nation on Monday after the attacks that left in 29 people dead. “These barbaric slaughters are… an attack upon a nation, and a crime against all of humanity,” he said. (Photo by SAUL LOEB / AFP) (Photo credit should read SAUL LOEB/AFP/Getty Images) Image by Getty Images

On July 25th, Attorney General William Barr directed the federal Bureau of Prisons to reinstate the death penalty. The next day, former White House counsel and witness in Nixon’s impeachment trial John Dean posted a tweet critical of Barr. He wrote that Barr must be an “Old Testament kind of guy” to do such a thing.

No surprise that Barr wants to kill people. That is the kind of personality he has, and he does not hold human life (other than his own) in high esteem. He’s a 17th Century and Old Testament kind of guy and probably sees himself as the King’s executioner! https://t.co/tVtDsV1Msy

Like presidential hopeful Mayor Pete Buttigieg’s habit of calling Mike Pence a “Pharisee,” Dean’s reference implies that the central scripture of Judaism is the source of bad things. (In response to feedback, Buttigieg stopped using the term Pharisee and began to use the word “hypocrite” to describe Pence.)

I am a product of Christian education. At no point in that (excellent) education was I taught that gay employees should be fired or gay students expelled. But we did learn a lot about Pharisees… https://t.co/CuaI3qNYas

What seems to be happening in these cases is that these men, like many of us, are so horrified by the Trump administration’s nihilistic violations of human rights that they search for ancient religious metaphors to describe them.

The problem is that many of Christianity’s old metaphors for hypocrisy, materialism and twisted values refer to Jews or Judaism, so people searching within Christianity for metaphors that express their profound outrage, dismay and anger at the Trump administration end up associating it with Jews and Judaism.

This phenomenon is, as we sadly often have to say, “not good for the Jews.” We’ve got enough to worry about with a white supremacist, demagogic president and an empowered right-wing that glories in anti-Semitism with the use of the term “globalist” and chants of “Jews will not replace us.”

I propose a more accurate and less harmful metaphor. This metaphor doesn’t divide people by faith tradition or by political viewpoint, but by something deeper: a worldview. I posit that Trump, Pence, Miller and Barr are not like Pharisees or devotees of the “Old Testament.” They are rather idolators, and that’s what we should call them.

That’s why there are “shithole countries” and cities “infested” with rats and crime.

That’s why Trump couldn’t embrace Puerto Ricans after Hurricane Maria. That’s why asylum seekers aren’t permitted showers, so that they will physically become what Trump and his cronies imagine them to be in essence: filthy and disease ridden — in other words, impure. And that’s why Trump can lie and assault with impunity.

As the President himself observed, he could shoot someone on 5th Avenue and wouldn’t lose votes. In this idolatrous worldview, which has its grip on the federal government, Trump is pure by definition. He cannot transgress, and he will not allow himself to be contaminated by contact with the impure.

For the rest of us with a religious worldview, whatever our faith or politics, purity and impurity are states that people and things pass in and out of. No human body is essentially dirty while another is clean. It’s transgression that makes us impure, not the color of our skin or the place we come from.

Prayer, repentance, ritual and good deeds can restore us to purity when we have transgressed.

Using the metaphor of idolatry to describe the depravity of Trump and many in his administration can help us unite across lines of faith and political persuasion. Don’t be fooled by Pence’s Protestantism, Barr’s Catholicism or Miller’s Judaism. They are idolators, for whom whiteness and maleness are permanently, essentially pure, and all else is impure and thus subject to systematic violation.

Contrary to Dean’s negative assessment of the “Old Testament,” we can look to the Torah along with the scriptures of other religions to learn how to shun and defeat idolatry. The book of Isaiah (45:20) says, “Gather together and assemble, you fugitives from the nations. Ignorant are those who carry about idols … who pray to gods that cannot save.”

Rachel Eskin Fisher, Ph.D. is a filmmaker and writer. She co-Produced and co-Directed the documentary film “Joachim Prinz: I Shall Not Be Silent”.

It’s Time To Call Trump And His Team By Their True Name: Idolators.