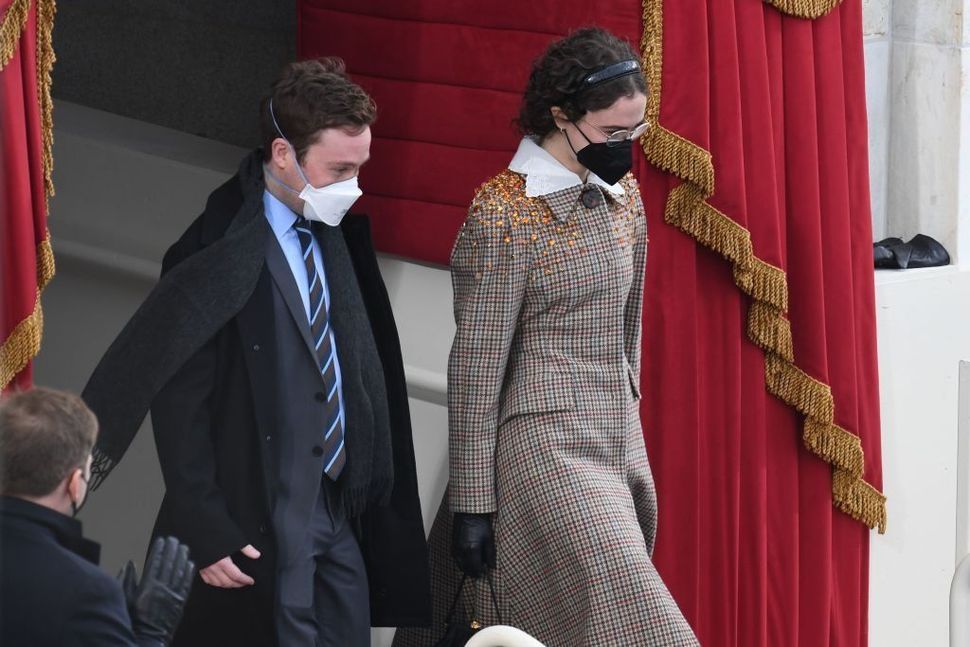 I want to acknowledge that I have a somewhat irrational interest in — some might say obsession with — the Second Stepdaughter.

I trace it to the fact that I was on a family vacation when Joe Biden announced in August that Kamala Harris would be his running-mate. I have four college-age nieces and nephews so naturally we were interested in Ella Emhoff, who is 21 and a student at Parsons School of Design in Manhattan. Opening Instagram, we were instantly enchanted by her vibrant feed, where she posts her unusual hand-knit creations, struts her tattoos and generally exudes the perfect balance of coolness and warmth.

She looks like so many people we all went to camp with. She and her brother, Cole, now 26, coined the nickname Momala!

Over the next months, from her moving introduction of “Momala” at the Democratic National Convention through her stunning suit at this week’s inauguration, I admired this young woman’s poise and pure originality. We published numerous stories about how the Harris-Emhoff clan — a mixed-race, interfaith and blended family — was inspiring for American Jews from similar backgrounds.

And so when I was putting together the Forward 50, I chose Ella rather than her dad, the now-official “Second Mensch,” for our list of intriguing and influential American Jews.

We knew it’d be a longshot to get the increasingly in-demand — and also still enrolled in college — Ella to join one of our Zoomversations with members of the Forward 50. But when the polite decline came, the reason threw me. “Ella is not Jewish,” wrote Joseph David Viola, the spokesman Ella’s Instagram refers queries to.

This only made me more intrigued, so I asked one of our reporters, Irene Katz Connelly — who is herself part of a mixed family and has written several of our stories about the Emhoffs as well as Biden’s Jewish in-laws — to follow up. I wanted to know why Ella didn’t embrace her dad’s Judaism, whether she identified with any religion, what holidays they celebrated and how, why she and her brother, Cole, had embraced a Yiddishism in creating “Momala.” Could we get an interview? 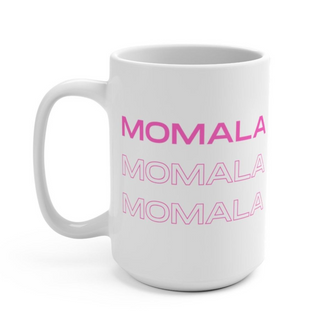 No, sadly. Viola said in subsequent emails that  Ella’s dad has been “celebrating Judaism for a few years now but out of an independent search,” and that Ella was living on her own in New York during this period. “It’s not something she grew up with,” he explained. “Ella truly has no qualms with the faith, but she does not want to speak on behalf of Judaism, as she does not celebrate herself.” 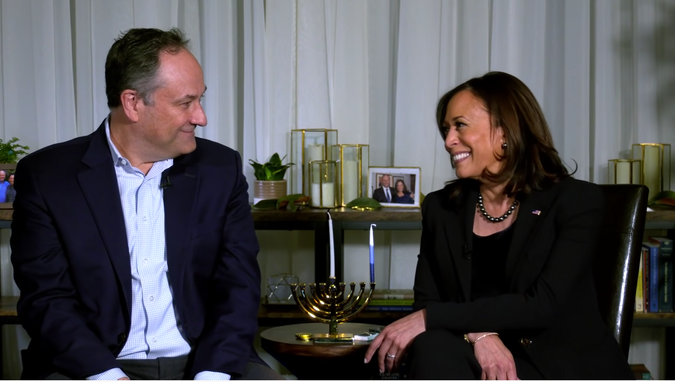 Kamala Harris and Doug Emhoff on Hanukkah. By youtube

I’d still love to talk with her about all this — and about her knitting and many other things — but Ella has already taught me an important lesson about my evolving understanding of the changing mosaic of our Jewish communities.

I try to take the broadest possible big-tent approach to who is Jewish (or Jew-ish, as Archie Gottesman of Jew Belong likes to say), in part because I see so many non-Jewish spouses actively engaged in my Reform synagogue, raising Jewish children. I am not persuaded by the argument, as outlined in angry emails from halachic Jews and put forth by some Jewish leaders, that sees intermarriage as a threat to our continuity.

I’m committed to covering the American Jewish world we have, in which interfaith families and patrilineal Jews are, increasingly, critical participants and leaders. As this 2013 Tablet article shows, millennials are making intermarriage a “story of retention, not assimilation.” The Pew Research study on which it’s based found that 59% of the 18- to 29-year-old children of intermarried parents identified as Jewish. .

But part of this open-door approach means accepting that not everyone is going to walk through. If Ella Emhoff, whose mother is not Jewish, and 41% of her peers don’t identify as Jewish, that’s their prerogative.

I reached out to Jodi Bromberg, who runs 18Doors, the leading organization working with interfaith families, to help put the Emhoffs  into context, Bromberg pointed out the obvious: that every interfaith family has its own way of working out identity and practice.

She shared the basic contours of her own: she and her two brothers were all raised Jewish and all married non-Jews; her wife doesn’t identify as Jewish but does “lots of Jewish stuff;” a niece who celebrated Christmas and Easter at home (and Rosh Hashanah and Passover with the Jewish grandparents) recently went on Birthright Israel; a nephew who was baptized Catholic and took First Communion is head of his college chapter of AePi, widely considered “a Jewish fraternity.”

“I don’t think we are good as a Jewish community at talking about the complexity and nuance of identity — even the labels that we use don’t always reflect our ongoing practices,” Bromberg told me. “We’ve got to embrace the messiness,” she added. “Young-adult children are free to make their own spiritual and religious decisions — and will whether we want them to or not. But that’s not fixed for any of us.”

So, Ella, the door is still open if you decide you want to dabble in Judaism. And if you want to talk about it, we’re ready to listen — your rep knows how to get in touch.