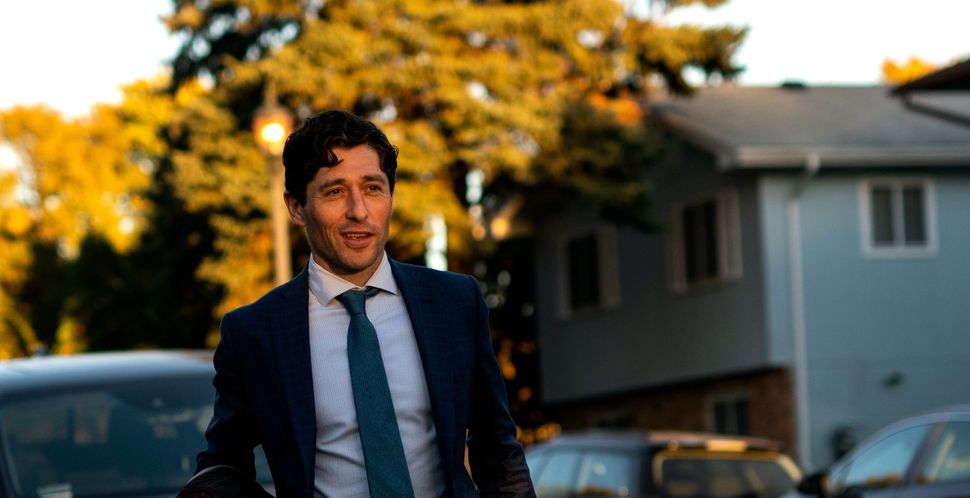 A shorthand voters’ guide for Tuesday’s mayoral election in Minneapolis could have defined the choice of candidates as left, left and lefter.

The winner, incumbent Mayor Jacob Frey, was one of the lefts, even if he ran to the right.

“It’s Minneapolis, so it’s a given that the mayor is going to be a Democrat,” Mrotz, whose group champions racial and economic justice issues, continued of the city where the last Republican mayor — who held office for only one day — served in 1973.

Although Tuesday’s ballot in fact displayed the names of 19 candidates representing various political stripes, the top three finishers Tuesday were Frey, former state Rep. Kate Knuth and community activist Sheila Nezhad. In the second and final round of the city’s ranked choice voting system, Frey received 56% of the vote and Knuth 44%.

Both to Frey’s left, Knuth and Nezhad supported a ballot question asking voters to eliminate the Minneapolis Police Department in favor of an as-yet undefined public safety department. The initiative can trace its origins at least in part to the “defund the police” slogan, sparked by public outcry following the police murder of George Floyd. It should be noted, however, that some reform ideas, such as social workers responding with Minneapolis police officers to calls involving mental illness, pre-date Floyd’s murder.

Frey, who depending on your political persuasion famously or infamously evacuated the Third Precinct police headquarters before it was burned to the ground following Floyd’s murder, opposed the measure.

That gambit paid off, with voters of various backgrounds, including some Black erstwhile police reform advocates, turning down the measure. The sentiment appeared to prevail across the country Tuesday, with Virginia voters giving Republicans an upset win in the governor’s race, and New York City’s election of Eric Adams, a less-than-left-wing Democrat and former NYPD chief, as mayor.

In Minneapolis, Jews were on both sides of the police measure.

“I worked on the public safety issue,” said Enzi Tanner, a colleague of Mrotz at JCA. “Even though it didn’t win, I do have a lot of hope for what happened in Minneapolis,” he continued, counting as a victory a shift by Frey toward adapting some components of the police measure, such as a change in the required minimum number of police officers.

Dudley Deshommes was on the other side.

“I live in the suburbs, but I want to be able to still frequent downtown and still feel safe,” he said, attributing Frey’s victory in part to the measure’s defeat.

Yet he said he was surprised Frey had won.

“A month ago, a friend of mine and I were saying, ‘I don’t think he’ll be reelected.’ You had the pandemic, then George Floyd, then defund the police, then him fighting the City Council, and reopening George Floyd Square to traffic. I thought, ‘There’s no way.’”

Despite those adversities, the way stands to be brighter for Frey, to whom voters handed an added victory in the passage of another ballot measure — one that will strengthen the powers of the mayor, taking away from the city council the authority to fire department heads. Frey himself seemed surprised that it succeeded.

“And they’re all reporting?” Frey asked of the election returns in a clip broadcast by KARE-TV. “Wow. So, I think that’s actually the most important thing on the entire ballot.”

So now empowered, what does the reelection of this Jewish mayor mean to his various constituencies?

Or to put it parochially and in the vernacular, is it good for the Jews?

“Is it good for Jews? Good for Blacks?” Deshommes said, elaborating on my question to cover both of his dual ethnicities — and mine.

“That’s to be seen. I hate to make a comparison to Ilhan Omar,” he said of the Minneapolis member of The Squad of progressive Democratic members of Congress.

“Is she good for the Jews? Is she good for Blacks? Just because you have that ‘D’ behind your name…” he said, with his voice trailing off and the sentence left unfinished.

Because the left has a lot of work to do.

Correction: The original version of this article incorrectly reported that Mayor Jacob Frey told firefighters to stand down when the Third Precinct police headquarters burned. In fact, he instructed that the building be evacuated, but did not specifically tell firefighters not to engage the blaze.