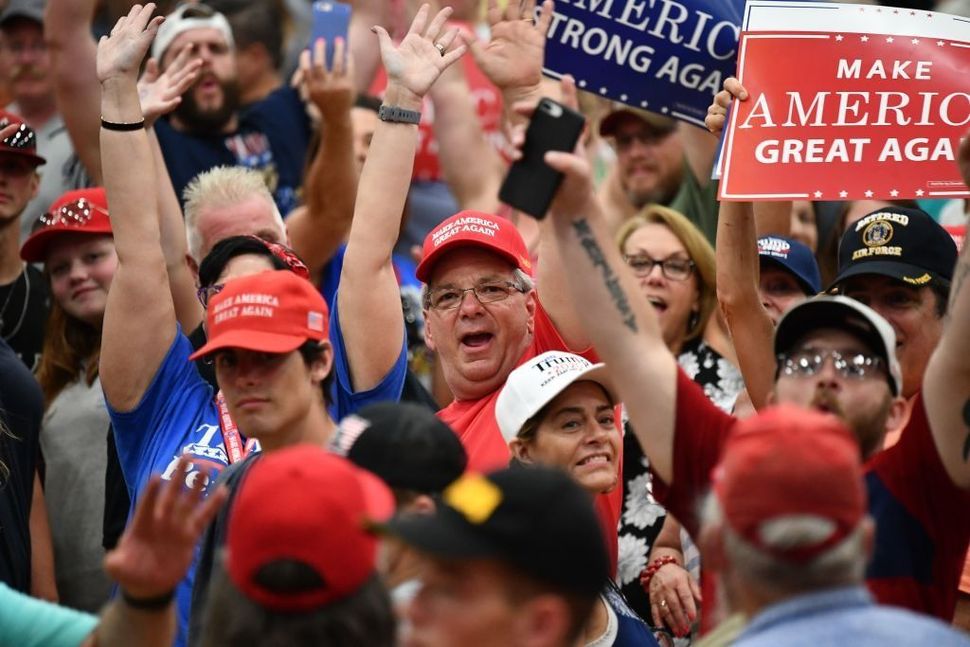 On July 9, Rabbi Danya Ruttenberg concluded in this magazine that progressives do not have to engage Trump supporters. In her article, she argues that Trump is so pervasively evil that talking will do no good — or take so long that engaging with Trump is a waste of time.

Rabbi Ruttenberg here falsely compares Trump and his supporters. Trump may be irredeemable, but his supporters are not Trump. They’re a varied group of people: rich and poor, white and black. Ten percent of them are from California and New York.

We may, in fact, learn something from those we perceive as hopelessly misguided. Equating Trump with his supporters attributes to all of his supporters the same traits that Rabbi Ruttenberg finds so objectionable in Trump himself. More than 61,000,000 people voted for Trump. Are they all racists? Do they favor separating children from families? Do they all wish to kneecap the poor? If so, then it is time for Rabbi Ruttenberg, her family, my family and all other Jews here to make Aliyah.

Could the same also be said of progressives? Are rural and small-town Americans deplorable, and therefore unworthy of attention from the left? Are police officers so racist as to also be tarred with the brush of deplorable? Do those who have studied hard and incurred debt to become educated, and then worked 50-70 hours a week, have any justification for wanting to keep more of their earnings rather than share them with those who have made unwise choices? Are these people so greedy that they have become deplorable?

The question, then, is who can be engaged and how. Viewing a Trump rally last night in Tampa, I saw an uncontrolled mob that, upon seeing the press, could not repress the urge to be profane and threatening. Interestingly, I saw Blacks, Hispanics and other minority groups among them. What is it about Trump that attracts people, not all of whom are racists?

With Haidt’s definition in mind, I would argue just the opposite of Rabbi Ruttenberg’s premise that we have no moral obligation to engage with Trump supporters. Progressives must engage Trump supporters, and vice-versa. Progressives must engage them as equals, not, as Rabbi Ruttenberg suggests, as socially invalid. That may be fine for a former Nazi such as Derek Black, whom Ruttenberg discusses, but there is nothing to suggest that Trump supporters are Nazis (though Trump’s irresponsible rhetoric and dog whistles have given undeserved validation to Nazis).

Rather, progressives must view Trump supporters as equals who have nothing to be ashamed of, just as Trump supporters must treat his opponents as equals. The fact is that we are all Americans. That is worth keeping even if it makes for some uncomfortable conversations.

“Purveyors of political tribalism on the left and right may think they are defending American values, but in fact they are playing with poison. America will cease to be America — and will no longer be a super-group — if we define out national identity in terms of ‘whiteness,’ ‘Anglo-Protestant culture,’ ‘European Christianity,’ or any other terms not inclusive of all religions and ethnicities. But, it will also cease to be America if enough of us come to believe that our country and its ideas are a fraud.”

“The peril we face as a nation today is not only that America might fail to live up to its promise, but that Americans might stop believing in that promise or the need to fight for it. The increasing belief on the left that this promise was always a lie, or on the right that it has always been true – and has already been achieved – are two sides of the same coin.”

None of this requires progressives to ratify racism, family separation, religious discrimination, kneecapping the poor or degradation of the planet. Indeed, many Trump supporters would never support any of those things; and progressives and Trump supporters need to realize that, at the end of the day, they are seeking the same things.

What is required is a renewal of dialogue recognizing that we share a unique mutual interest in the one thing that makes all of us better: We are Americans. On July 17, 2018, while in Johannesburg, South Africa celebrating Nelson Mandela’s 100th birthday, former President Barack Obama said:

“Democracy demands that we’re able also to get inside the reality of people who are different than us so we can understand their point of view. Maybe we can change their minds, but maybe they’ll change ours. And you can’t do this if you just out of hand disregard what your opponents have to say from the start. And you can’t do it if you insist that those who aren’t like you — because they’re white, or because they’re male — that somehow there’s no way they can understand what I’m feeling, that somehow they lack standing to speak on certain matters.”

I never voted for President Obama, but I was nonetheless proud when he won, because I was an American and so was he. I agree with him that we need to speak to each other with respect. We can’t give up on the American Dream just because it has not yet been fully realized in practice. After all, the dream is the bond we share, irrespective of race, ethnicity, color or creed.

To be American is to understand that, from the beginning, we have depended on each other. The United States has become the strongest, richest and freest nation in the world because, ultimately, we have let everybody contribute and we have learned to depend on each other.

Walter Sales is a Reform Jew, a trial and appellate lawyer for 45 years and, most importantly, the husband of Susan, the father of Emily and Stephanie, and the grandfather of Jack, Aaron, Benjamin and Nora. Though he grew up in a politically progressive family, Walter characterizes himself as a Conservative/Libertarian and #nevertrump.