These Breslov Tunes Were Saved by Rock ‘n’ Roll 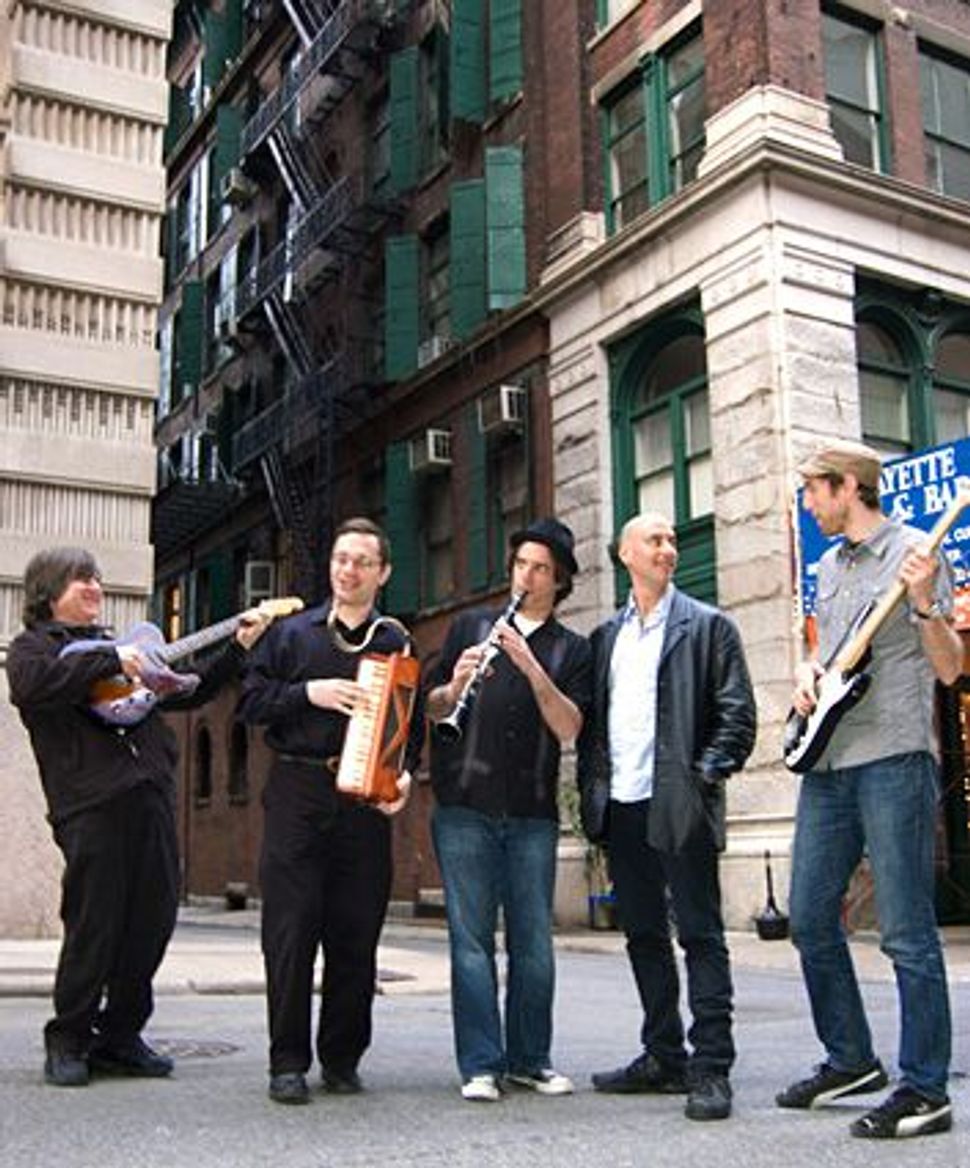 The tragedy is, that underneath the schmaltz there are sometimes very beautiful melodies. These are often best appreciated in situ, as it were — at a Hasidic tisch or other religious celebration. In many cases, however, it is easy to hear the potential such pieces could have in the hands of truly creative artists.

Here at the Forward, artist-in-residence Jeremiah Lockwood has been doing exactly that kind of work with The Nigun Project, taking traditional melodies and casting them in innovative musical settings. Binyomin Ginzberg, the keyboardist, vocalist, vibrandoneon virtuoso and leader of the Breslov Bar Band, has mined similar territory on his new album, “Have No Fear,” which was launched last night at Brooklyn’s Knitting Factory.

A native of Brooklyn, Ginzberg is a practicing Orthodox Jew, but one who has chafed against the more extreme strictures of his religious education and environment. While attending yeshiva in Scranton Pa., he got into trouble for having a radio in his room as part of an amplifier for his keyboard, even though he had rendered the radio inoperable. At that point, he figured, if he was going to get into trouble for a radio he couldn’t even listen to, he might as well listen to it.

Since then, Ginzberg has moved between the worlds of the Orthodox ‘club date’ industry, playing weddings and bar mitzvahs, and the more freely artistic klezmer and jazz scenes. It was while playing at a wedding that he met Michael Heitzler, a clarinetist who introduced him to klezmer, and set him on a path that has led to gigs teaching Hasidic music at such avant-Yiddish institutions as KlezKamp and Yiddish Summer Weimar.

The Breslov Bar Band is a perfect fusion of these two spheres — traditional Hasidic music on the one hand, and a thoroughly contemporary sensibility on the other. Along with Ginzberg, the band features Mike Cohen on clarinet, Rich Huntley on drums, Yoshie Fruchter on electric bass and Allen Watsky (who may well have the best Beatles mop this side of the ‘60s) on electric guitar. While the band moves between styles from song to song (“Mi Yiten” is distinctly reggae flavored, “Adir Ayom” is a more tranquil, Andy Statmenesque meditation), the overall aesthetic is one of intelligent and energetic rock music, only with Jewish musical modalities rather than Blues as its foundation. “The idea was to take the raw material and play it the way we feel it,” Ginzberg told me. “We’re 21st century musicians playing Hasidic music using our own vernacular.”

That said, Ginzberg is deeply steeped in the Breslov musical tradition that originated in the late 18th and early 19th centuries with the Hasidic sect’s founder, Rebbe Nachman of Breslov. As Ginzberg’s liner notes explain, the songs on the album can be traced back to sources both specific (The Maggid of Mezritch, Rabbi Meir Shapiro) and apocryphal (“Turkish sailors”). In the hands of The Breslov Bar Band, however, each of these songs is imbued with a spirit that is all too rare. And despite (or perhaps because of) the occasional shredding guitar solo, one imagines that Rebbe Nachman would approve.

Listen to a sampler from Breslov Bar Band’s ‘Have No Fear’:

These Breslov Tunes Were Saved by Rock ‘n’ Roll