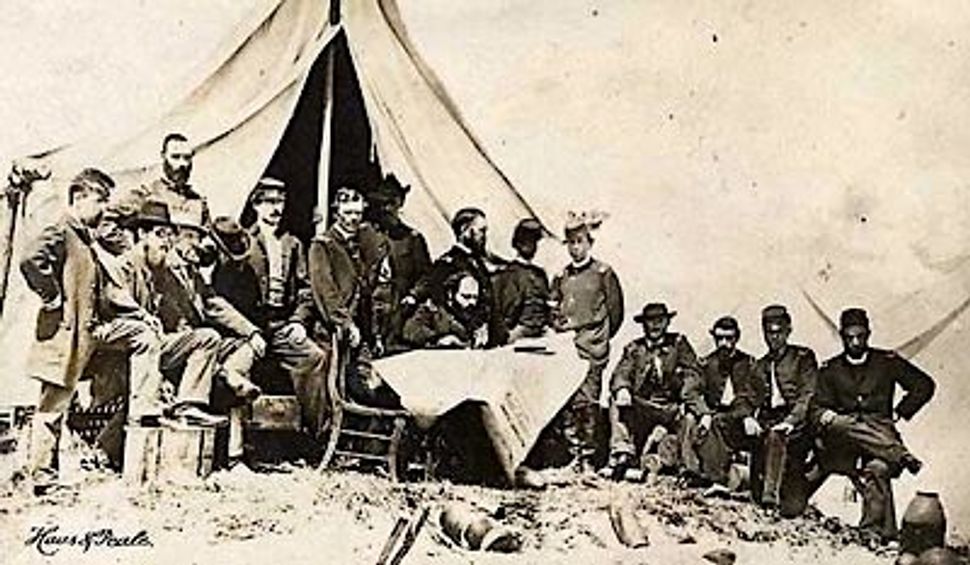 The film aims to redress this historical oversight, analyzing the well-worn story of the Civil War through the eyes of Jewish participants. Like the rest of the country, Jewish Americans were split on the issues of slavery and secession. The Confederacy, it turns out, was home to a considerable Jewish population. Charleston, South Carolina, was the largest Jewish American hub in the country until the middle of the 19th century. Louisiana senator Judah Benjamin, who the film follows at length, was not only the first elected Jewish representative of that state, he also served as Jefferson Davis’s right hand man. His likeness even appeared on the Confederate two dollar bill.

Of course, there were Jewish abolitionists as well as Jewish slave-owners. Perhaps the greatest unsung Jewish hero of the Civil War was Isachar Zacharie, Abraham Lincoln’s doctor-turned-spy for the boys in blue. “Jewish Soldiers in Blue & Gray,” using the standard documentary arsenal of historical experts and close-ups of dog-eared documents, gives a convincing representation of the valor of Jewish Americans in battle, and has a few touching stories of troops bonding together to preserve religious traditions even in the heat of a military campaign. One Passover, for example, soldiers substituted fermented cider for wine and hot peppers for maror.

The creeping tendrils of anti-Semitism made Jewish military accomplishments all the more impressive. Though Lincoln worked specifically against discrimination by religion, Jewish soldiers still had to fight for representation by a Jewish chaplain on the battle field. The most shocking blow against Jewish American families during the war was Ulysess S. Grant’s General Order 11, which ordered Jewish families in the Tennessee territory — an area that included Kentucky and parts of Mississippi — to evacuate their homes with only 24 hours notice. Though Lincoln overturned the order, the specter of the proclamation lingered, becoming a point of contention during Reconstruction.

“Jewish Soldier in Blue and Gray” certainly highlights the contributions that Jewish Americans made during the war effort, but it also shows how integrated Jewish immigrants already were into American culture at that time. Just like other Americans, Jewish Americans either supported slavery or didn’t, fought for their home in the sweltering South or the industrial North, sacrificed their limbs and livelihoods for the sake of principle. The only Jewish military cemetery in the world outside of Israel is located in Richmond, Virginia. As Lawrence Grossman has pointed out in an essay in this newspaper on the topic of Jews in the Civil War, the division of the country was an Americanizing process for recent Jewish immigrants. Jewish soldiers, whether in blue or gray, became American soldiers.