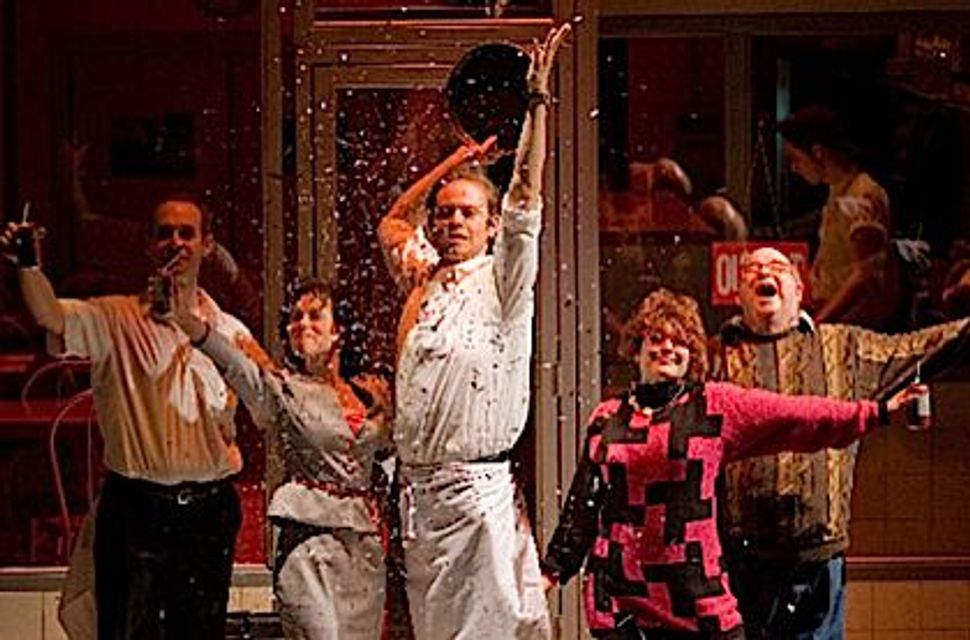 In Montreal, not only can a musical about smoked meat be more than a gag, but “Schwartz’s: The Musical” is a $240,000 professional production. That’s around twice the usual cost of a play at the Centaur Theatre, where the show is playing until May 7.

Schwartz’s, a “Hebrew Delicatessen” founded in 1928, is a mecca for meat lovers, and its waiting line is as much of a trademark as the items on the menu. Clippings on the wall testify to the many celebrities who have passed through: Tina Turner, Celine Dion, Mick Jagger, and many sports and political figures (there’s even a running joke that eating at the diner ensures future Canadian prime ministers a majority government when they come into power — a pertinent theory seeing as Canadians are going to the polls on May 2).

The musical reads like a dream — albeit the dream you’d have falling asleep with the “Best of Broadway” playing on repeat after a night of beer and that smoked meat sandwich that seemed like a good idea at the time. Alternatively, it feels like a two-hour infomercial for the famed delicatessen.

Featuring 63 characters played by 11 performers, it tells the story of a Torontonian’s attempt to franchise the joint in 1998, with (seeing as it is a musical), a love story forced into the mix. In the end, as everyone knows, Schwartz’s resists the seduction.

Like many unusual projects, the musical was born of a bet between friends. A book about Schwartz’s was written by Gazette columnist Bill Brownstein in 2006. It was he who jokingly challenged Rick Blue to turn it into a musical in 2008. One half of musical comedy duo Bowser & Blue (the other being George Bowser), Blue took Brownstein’s challenge literally.

But “smoked meat — can you write a play about it?”

Brownstein asked the question first, but then Bowser & Blue wrote it in as the first meta-line of the musical. Could they? It was certainly a struggle: the current production is the 11th version of the script. And it shows.

Yes, the talent is remarkable. And the production values are high, buoyed by a marvel of a set by John C. Dining. But the musical itself is unfocussed, a patchwork of different plots and messages supported by 18 songs that themselves form a pastiche of everything from gospel to rock to Gypsy music. The musical hodgepodge can sometimes be fun, even if the songs are reductive, but the jumbled plot is overambitious and sloppy. With smoked meat as its base, the musical makes thin connections to wildly different subjects. There is commentary on everything from the Montreal-Toronto rivalry to the French-English language divide, cultural stereotypes (including, of course, of Jews) and existential crisis. Mere smoked meat even inspires such lofty dreams as “leav[ing] the world a better place… for those who come along.”

That being said, the joke might be on us critics. There’s a parallel to be made between “Schwartz’s: The Musical” and the restaurant it depicts: they’re crowd pleasers first and foremost. Schwartz’s isn’t going to get four Michelin stars, and the musical’s not going down in the annals of stage history. But that misses the point. The show sold out within a week, leading the theatre to add another week and a half of shows. It’s a hit.

But just as Schwartz’s: The Restaurant succeeds because it resists franchising, this musical will only make it in its hometown. So even as the production has hopes for touring and even Broadway, they best pay heed to the lesson learned at the end of their own musical. They’ve traded in universal appeal for astounding local success.