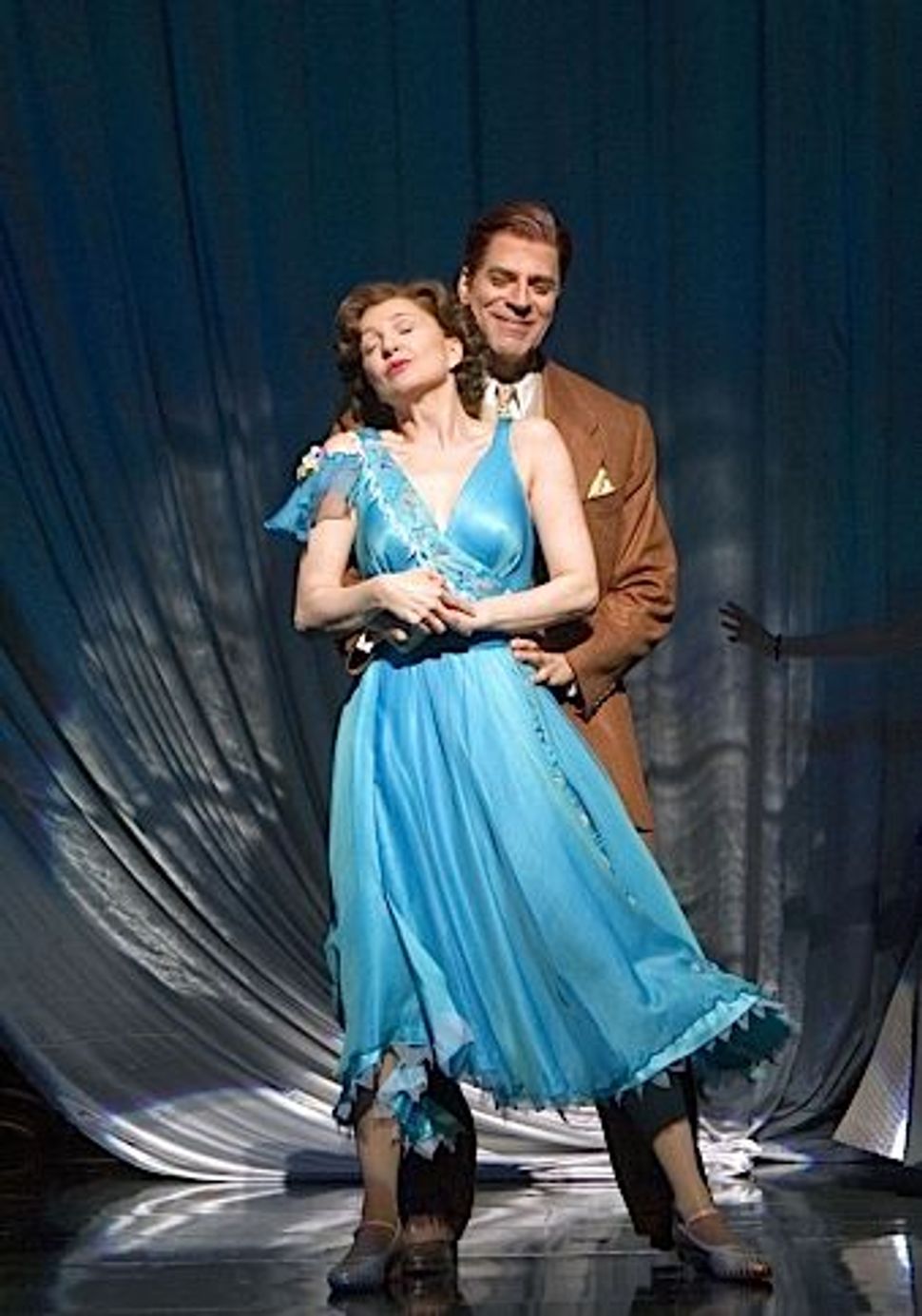 Donna Murphy and Christopher Innvar in ?The People in the Picture.? Image by Joan Marcus

“The People in the Picture,” a new musical playing at the Roundabout theater until June 19, raises this question, treading where even the now sainted creators of “Fiddler on the Roof” dared not go. Indeed, in his commentary for the anniversary of “Fiddler on the Roof’s” original Broadway cast recording, Sheldon Harnick tells how “Fiddler” almost had dancing girls in a big second act production number. Jerome Robbins even had it choreographed before deciding that the juxtaposition of dancing girls to communal expulsion just wasn’t the show they were writing.

Though the dancing girls in the ghetto are only a brief moment in “The People in the Picture,” as an artistic choice it stands for a show which is neither very funny nor very serious, and ends up falling, unfortunately, on the wrong side of self-parody.

“The People in the Picture” moves back and forth in time between the 1970s and the 1930s. In the 1970s, Bubbie Raisel (Donna Murphy) fights with her very American, very stressed out comedy writer daughter, Red. But when she’s with her adoring granddaughter, Jenny, Bubbie spins lively tales of her life as a 1930s Warsaw Yiddish theater ingénue. Bubbie’s Warsaw family and comrades tell their story through song and dance, in the theater, at home, and yes, in the ghetto. The question of transmission — personal, cultural, historical — is played out through the three generations of women struggling with the legacy of the Holocaust.

“The People in the Picture” does have its moments. The best is toward the beginning of show, while Bubbie is recalling her triumph as the lead in “The Dybbuk.” The real “Dybbuk” was an unprecedented sensation, both as a play and a movie. However, Bubbie’s “Dybbuk” isn’t the seriously spooky movie we all know, but a rollicking parody, the kind done by someone with a genuine love for the original. “The People in the Picture’s” “Dybbuk” parody is a moment of comic genius, blurring the line between good and bad taste in the style of Mel Brooks, had he decided to do a Jewish horror movie instead of “Young Frankenstein.”

Unfortunately, the Mel Brooks moments are too few in “The People in the Picture,” and too heavily countered by the sitcom moments in the style of Neil Simon. Though Iris Rainer Dart (book and lyrics) has chosen what is possibly the most sober material a writer could find (Nazi persecution, the dehumanizing choices forced on Jews in the ghetto, the transmission of personal trauma) she is at heart a comedy writer, and she can’t resist a proven laugh line. The cheap yuks given to Bubbie (“take my single daughter, please!”) are jarringly clichéd, and rather than provide comic relief, they merely make the trite melodrama even harder to take.

There’s so much in “The People in the Picture” that deserves to be seen. Stories about Yiddish theater artists in Europe, about strong women, and especially, about spiritual resistance during the war. “The People in the Picture” makes a glancing reference to Bubbie Raisel participating in the secret collection of documents in the Warsaw Ghetto. What many audience members probably didn’t know is that the documentation and collection of Jewish history in the Warsaw ghetto is one of the most fascinating, and moving, instances of Jewish resistance during the war. The project was called Oyneg Shabes and was led by a man who really deserves to have his story told, historian Emanuel Ringelblum. Alas, none of this is illuminated for the audience. What could be a uniquely compelling plot point becomes a throwaway, sacrificed for the much more easily digestible melodrama of family secrets.

In the end, “The People in the Picture” reflects a cheap gloss on contemporary American Jewishness, an aesthetic where ancient jokes stand in for real character development and the Yiddish language itself is reduced to a gag song (the truly embarrassing number “Ikh Ukh Feh”). All these things deserve better, and who knows, maybe Mel Brooks will steal an idea or two.