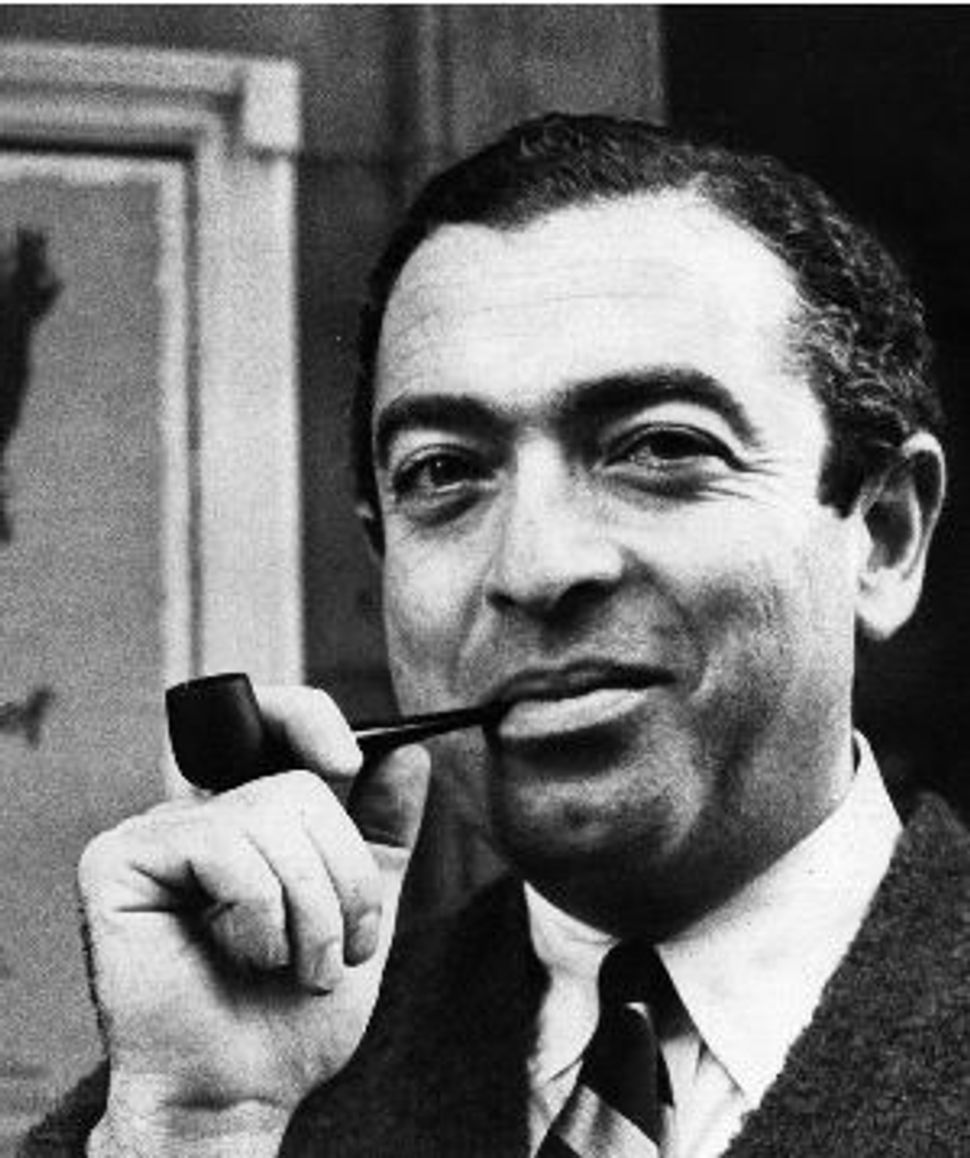 January 1967: Jerry Bock enjoys a smoke of his pipe outside the theater where ?Fiddler On The Roof? is being performed. Image by Getty Images

It’s hard now not to reflect a bit on this consummate Jewish musical, even if Brian Williams neglected to do so. In 2002 I served as a Steven Spielberg Fellow in Jewish Theatre Education, the goal of which, it was actually stated, was to move beyond “Fiddler on the Roof.” Ironically, I returned to the camp eight years later to direct the show. Thus I’m in the interesting position of first being sent in to destroy, and then to resurrect, “Fiddler” — not unlike Luke Skywalker with Darth Vader. And “Fiddler” was wheezing a bit when I held it this summer: My pre-teen cast didn’t know it since they hadn’t seen it on “Glee.”

My relationship with the show is actually much older though. When I was a pre-teen, our shower took a while to warm up. One Valley-Forge-like morning, I started walking around in a circle and rhythmically stomp/clapping the “Fiddler” bumpchiks. After about three circles I started singing “If I were a Rich Man,” and from then on this, to my parents’ puzzlement, became my shower routine. “Fiddler” music gets in your bones. Think about trying to sing “Rich Man,” (or Gwen Stefani’s “Rich Girl”), “Tradition,” or “Miracle of Miracles,” without moving your body. In Broadway’s most recent revival, critics accused Alfred Molina of not getting Tevye in his body; only Harvey Fierstein, and his bouncing Papa Bear frame, appeased them.

“Fiddler” captures two things Jews do well: stomping our feet, and wailing. Some numbers, like the “Wedding Dance,” have both. And the wails still make your hair shoot up. Listen to Zero Mostel, or Chaim Topol shout “NO, Chava! NO! NO! NO!” to the daughter they’ve had to renounce, as the chorus booms “Tradition,” swelling higher and higher, and tell me your back doesn’t shiver.

Is “Fiddler” overdone? Of course. But think of the bar mitzvah greats: “Celebration,” “Shout,” “You Look Wonderful Tonight.” In that context, doesn’t “Sunrise, Sunset” hold up pretty well? Is “Fiddler” schlocky? Schlock is material that thinks it isn’t sentimental but is. “Fiddler” isn’t schlock; it’s proudly sentimental. Is every creator of Jewish theater, myself included, envious that this work somehow crossed over into the canon, succeeding not just as Jewish theater, but as, well, theater? Yes!

The third member of the “Fiddler” trio, lyricist Sheldon Harnick, is alive and well and living in Manhattan, still writing and mentoring, as he has done to this writer. I hope he never goes, but if he does, and there is no mention, I am holding Brian Williams personally responsible.