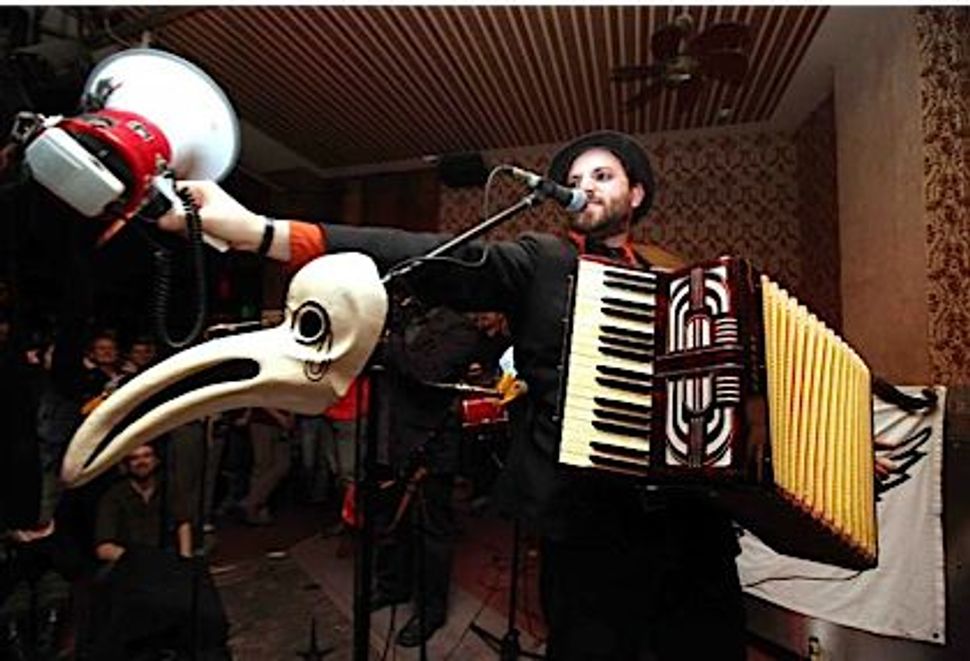 We all know people who seem to have been born in the wrong decade — or even in the wrong century. Only very few of them, however, attempting to connect their society with that of another world, stretch across eras, and become giants — artists and thinkers like Sun Ra, Walter Benjamin and Henri Matisse. Whether Daniel Kahn is merely an eccentric born in the wrong century, or is indeed a growing giant, is the question I kept returning to while listening to “Lost Causes,” Kahn’s third album with his band, The Painted Bird.

Although the material on the album is diverse, its backbone is Yiddish protest songs. These are century (or more) old Yiddish poems by writers such as Mordechai Gebirtig, David Edelstadt, and Mark Warshavsky, to which Kahn adds verses of his own English translation. The common thread running through the poems is class struggle, workers’ rights and demands of equality. Unlike the sardonic title of the album, the words are earnest. And music is simply fantastic. Klezmer tunes turn in the blink of an eye turn into New Orleans style marches, or Woody Guthrie/Bob Dylan-esque ballads. It’s folk — that is, people’s music — and it works so well in no small part thanks to the band, which stars such young klezmer greats as clarinetist Michael Winograd, trombonist Dan Blacksberg and violinist Jake Shulman-Ment.

But why should anyone care about revolutionary Yiddish songs? Consider the lyrics of “In Kamf (In Struggle)”: “You tyrants may murder and beat us / new fighters will rise in our place / & we’ll fight and you’ll never defeat us / we fight for the whole human race.” It’s hard enough as it is to speak poetically when you’re speaking politically, but when the slogans and rhetoric are so outdated (perhaps corny, even) the attempt borders on self-mockery. Class struggle has been beyond the periphery of Jewish discourse for decades now, and it is hard to take these words seriously. The same is true for the album’s opening track — also a poem by Gebirtig — which tells of a wise and generous thief, a la Isaac Babel’s Benya Krik: “The rich are leeches sucking money day and night / I’m just a flea who takes a bite, ain’t I alright?”

Listen to ‘In Kampf’:

And yet somehow, I find these songs irresistible. Why? The glimpse into an era of Jewish history rich and complex enough to be romanticized offers more than just anthropological appeal. It is a raw, pulsing, beating Jewish culture full of life, ideals, danger, humor and crassness all meshed into one. People believed in something. This is much more exciting than the assimilated, all-too-stable life that characterizes much of contemporary Jewish art. Kahn is reminding us of the roots that aren’t even that deep in the ground — echoes of our national unconscious that have what to offer those who hear them. Kahn attempts to pick up exactly at the place where things went wrong for Jewish art, offering a new route instead.

The sentiments of these Yiddish songs and the intimations of their contemporary relevance come to a crescendo in the album’s centerpiece, “Inner Emigration.” It is Kahn’s own song that tells a tale of withdrawal from surrounding society, tuning out its problems and suppressing their effect on one’s spirit. One verse is about a German Jewish woman who chose to stay in late 1930s Germany because of her cabaret career; another verse is about a Ukrainian Jew who let go of his aspirations in the face of danger: “What’s the bother finding a new nation? A border isn’t art, it’s just a frame / Just make a secret inner emigration. / The holy land and exile are the same.” Yet another verse is about an Israeli woman married to a Palestinian refugee: “She and he comprise a kind of nation, the kind we build inside when we’re alone. / But if they just make Inner Emigrations, / then they’ll only have a home when they’re at home.”

It’s not easy to say where Kahn’s own home is. The frolicking “Klezmer Bund” (whose title puns on the name of the Jewish Socialist party) is a klezmer anthem that brings together multi-generational and international klezmer all-stars — Michael Alpert, Psoy Korolenko and The Klezmatiks’ Lorin Sklamberg among others — and points to a larger community Kahn is part of. Ultimately, though, this song’s jovial message doesn’t fully encompass the political essence of Kahn’s convictions. The tune’s “Bund” is purely musical. But the political messages of his songs, their relevance and resonance, is Kahn’s own quest, impressive yet quixotic. Whether or not it is a “lost cause” remains to be seen.

Watch the music video for ‘March of the Jobless Corps’: