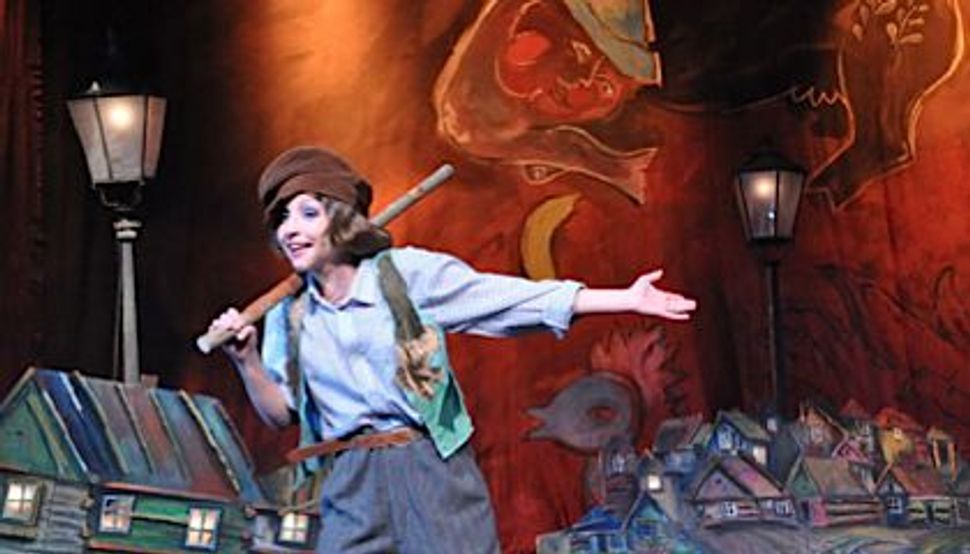 When the first Montreal International Yiddish Theatre Festival wrapped up two years ago, one could hear the usual critics saying: “Nu! Let’s see if there will be a second one.”

I had the honor to attend the festival both as a participant, introducing my film “Glimpses of Yiddish Czernowitz,” and as a spectator, taking in plays and concerts during the four days that I was there.

While watching various productions from the peanut gallery — an important part of any theater-going life — I thought of how Yiddish music festivals have become an established part of Jewish culture. Yiddish song, and especially klezmer, has attracted an audience with just a superficial knowledge of Yiddish, or even none at all. After all, one comes to a concert to hear music, not words. I have previously written about how, if you do know Yiddish, you might be disappointed by the way in which the words of songs are sometimes mangled or confused. Still, there are many musicians interested playing Yiddish music and enough of an audience to come and hear them.

A Yiddish theater festival, on the other hand, has to do primarily with language. You can’t put on a good play if the actors are speaking a mutilated Yiddish, and you can’t have a true Yiddish theater production if the audience doesn’t understand what’s happening onstage. Granted, contemporary technology allows for simultaneous translation and super-titles, but there is still the need for good translation and the risk of technical malfunctions.

Two years ago, the questions regarding Yiddish theater were even more acute than they are now. Does a true Yiddish theater exist today with professional-caliber actors? And just as important, is there an audience for such a theater?

The first festival showed that there exists both true Yiddish theater as well as — in Montreal, at least — an audience for it. This year, the second festival confirmed those facts. Its highlights included performances of “The Wise Men of Chelm” and Isaac Bashevis Singer’s “Teibele and Her Demon” by The State Jewish Theatre of Bucharest; Sholom Aleichem’s “The Lottery” by Paris’s Troim Theater; Sholom Aleichem‘s “Song of Songs” and Itzhak Katzenelson’s “The Song of the Murdered Jewish People” by The Esther Rokhl and Ida Kaminska Jewish Theatre in Warsaw; and Tel Aviv’s Yiddishpiel theatre with its musical production of “The Megillah of Itzik Manger.”

For me, the most impressive parts of the festival were the one-person acts, which composed a good part of the program. These included Avi Hoffman’s “Too Jewish?” and “Reflections of a Lost Poet: The Life and Works of Itzik Manger”; Rafael Goldwaser’s “The Metamorphosis of a Melody”; Yaacov Bodo’s “Lansky the Jewish Mafiosi”; David Mandelbaum’s “Yosl Rakover Speaks to G-d”; and Mendy Cahan’s literary-musical cabaret.

While each of these performers and productions deserves its own discussion, I would simply like to argue that all of them featured high-level acting, linguistic fluency and all-around excellence. Each managed to engage its audience to the last word, and each of the performers put a new shine on the Yiddish theater stars of yore. It’s a shame that there is no real permanent home for such talented people.

The question of Yiddish theater’s continued existence demands yet another discussion. There might have been an opportunity for such a conversation at the festival’s symposium, although, as is the way with most academic conferences, the discussion focused more on the past than on the future. It would have been useful, however, to hear more opinions about contemporary Yiddish theater, including a discussion of its place in contemporary Jewish culture.

Besides theater, the festival also featured excellent musical programming, including a concert devoted to the composer David Botwinik. The show consisted of pieces from Botwinik’s new collection, “From the Holocaust to Life: New Yiddish Songs,” featuring singers Lisa Wilson and Fishel Golding, a longtime actor in Montreal’s Yiddish theater, accompanied on the piano by Elena Berman-Gantard. The concert was produced by Botwinik’s three sons as a gift for his 90th birthday; rarely do we find performances of Yiddish music of such high quality. Botwinik’s work is in the tradition of Jewish composers such as Joel Engel, Josef Achron, Mikhail Gnesin and Alexandre Tansman, and his melodies intertwine organically with the best Yiddish poetry. Another performance of the same material will take place July 21 at the YIVO Institute for Jewish Research in New York.

I have often recalled Montreal’s special audiences, brought up on the city’s excellent Yiddish theater which was founded and led by Dora Wasserman. Since suffering a stroke in 1996, her life’s work was taken up by her daughter, Bryna Wasserman, who turned Montreal’s Segal Centre into a world-class Jewish arts center. It was she who conceived and carried out the two International Yiddish Theatre Festivals, seemingly unafraid of the risks therein. For the last 13 years she has been the driving force behind much of the city’s Yiddish and Jewish culture, bringing to her work a combination of energy, love, enthusiasm, optimism and talent. Now Wasserman is coming to New York to become the executive director of the Folksbiene National Yiddish Theater, and to help it secure its own future.

As we say, there is no Jewish celebration without a few tears. Wasserman’s departure from Montreal is a bitter pill for her friends and colleagues, who took part with her in the joys and challenges of bringing a risky venture to fruition. Now it’s left to the critics to say: “Nu! Let’s see what comes of this whole New York business!”