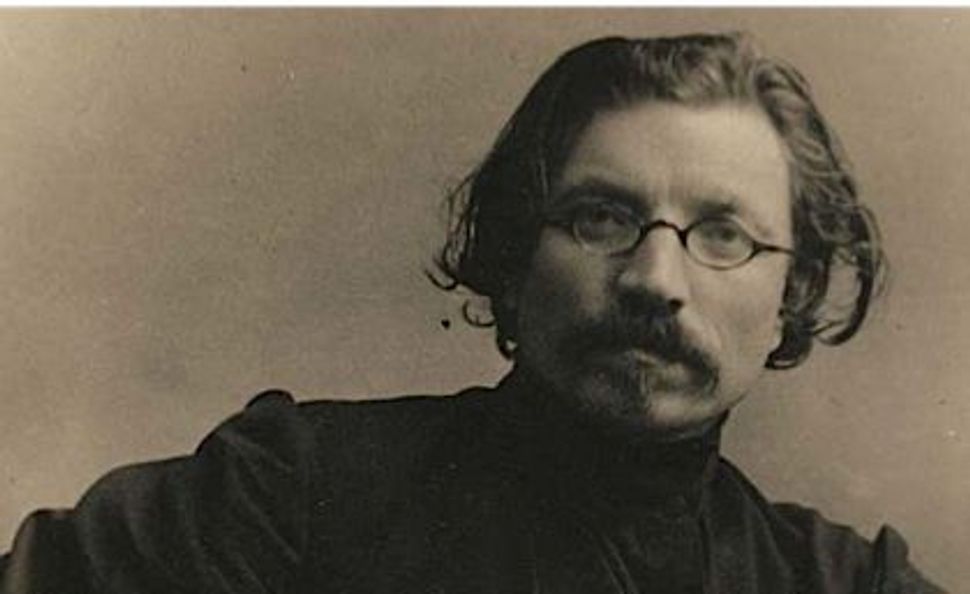 “He wrote standing up… Standing, walking, running.” So Bel Kaufman, granddaughter of Sholem Aleichem, describes the world’s most influential Yiddish writer. “He would look off into the distance and chuckle, as if hearing what his characters were saying to him, and then he would write.”

Joseph Dorman’s new documentary, “Sholem Aleichem: Laughing in the Darkness,” presents the life and work of a man, born in a small Ukrainian town in 1859, who came to capture the voice of everyday Jewish life in the shtetl. The film, opening July 8 at Lincoln Plaza Cinema in New York, and screening later this month at the Jerusalem International Film Festival and the San Francisco Jewish Film Festival, features an extensive archive of both personal and historical photographs, as well as interviews with various scholars and enthusiasts of Jewish and Yiddish literature, including Dan Miron, Hillel Halkin, David Roskies, Aaron Lansky, Ruth Wisse, and, of course, Bel Kaufman.

One might expect a film about a writer who is often remembered as a master humorist to be light and full of comedy and farce. His first work analyzing Yiddish was, after all, an alphabetical glossary of his stepmother’s curses, which he compiled at age 14 (“May the worms eat you”; “May a toothache make you yell”; “Sit on scorpions”). And as Sholem Aleichem once said of himself, “to make people laugh was almost a sickness with me.” But while the film represents the humorous side of his work, in the end his is a melancholy story.

Despite a happy childhood until his mother’s death at the age of 13, Sholem Aleichem, born Sholem Rabinowitz, spent most of his life trying to escape poverty, violent anti-Semitism, and a modern Jewish world that was increasingly less interested in connecting with its past. Toward the end of his life, with his American theatrical debut, he found himself scorned and rejected by a youthful audience ardently and stubbornly focused on the future.

Despite these hardships, his death and funeral of about 200,000 people — one of the largest in the history of New York — ended up, as David Roskies explains, “consolid[ating] all factors of the Jewish community in a way that no other public figure had.” And his works came to be embraced internationally, primarily in the United States, the Soviet Union and Palestine.

Although, as critics in the documentary astutely point out, modern reinterpretations of the story of “Tevye the Dairyman” in many ways altered the character who had come to stand in for Sholem Aleichem’s own aging point of view, the popularity of films like “Tevye” (1939) and “Fiddler on the Roof” (1971) demonstrated the continuing relevance and universality of the themes taken up in his writing, and especially the tensions between tradition and modernity.

Towards the end of the documentary, Ruth Wisse, a professor of Yiddish literature at Harvard, argues that “if one does not have access to Sholem Aleichem, then, in fact, one has lost access to the process of modernization itself… When that is lost, one is empty of something, something that really was part of one’s self.”

“Sholem Aleichem: Laughing in the Darkness” is, simultaneously, an ode and a eulogy to a world that was already, at that time, disappearing. As the film opens, we hear a recitation of Sholem Aleichem’s words, which fall somewhere between a plea and a tease: “It’s too bad you’re in such a hurry because the stories I could tell you… bushels and baskets of stories, whole crates full of stories.” For those willing to take the time, Sholem Aleichem’s life and writings continue to have much to tell us.

Watch the trailer for ‘Sholem Aleichem: Laughing in the Darkness’: