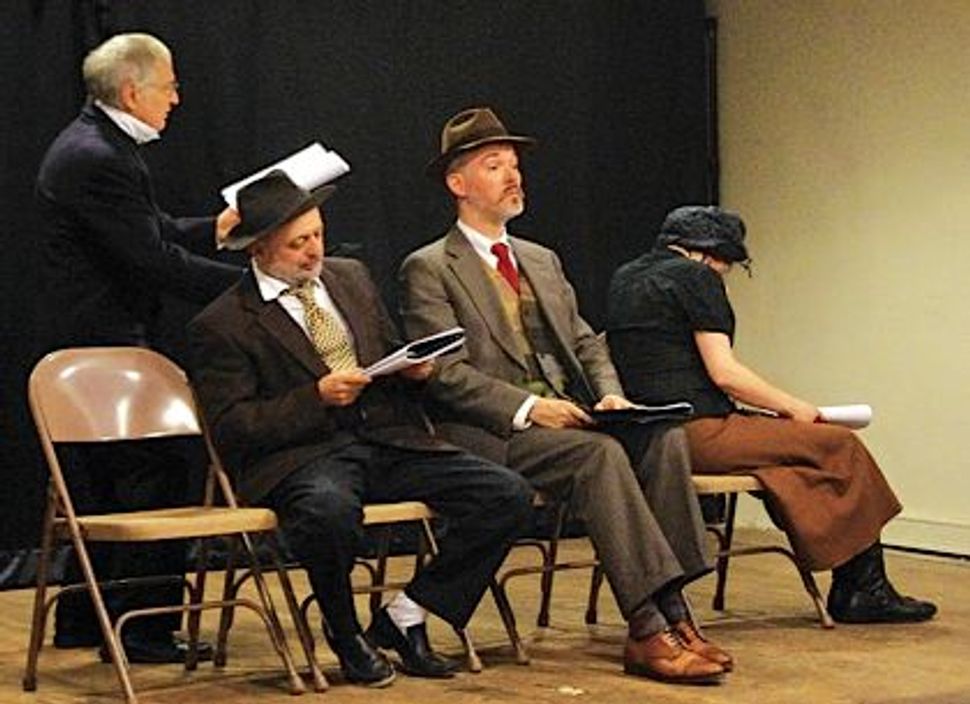 To perform Yiddish theater today, you need a lot of money, or a lot of ambition. The New Yiddish Rep theater company, led by David Mandelbaum, has the latter.

Mandelbaum is an actor and director who also plays most of the other roles a theater company requires. Like any typical theater person, he is always on the lookout for creative talent, and when he searches, he usually finds. For “Agentn,” the New Yiddish Rep’s latest production, Mandelbaum found five talented collaborators: director Moshe Yassur, clarinetist Dmitri Slepovitch and actors Yelena Shmulenson, Rafael Goldwaser and Shane Baker.

The play is based on the works of Sholem Aleichem, which makes for good theater, even though Sholem Aleichem himself was not a particularly impressive dramatist. The different parts of the play, which draw on several of Sholem Aleichem’s stories, are unified by a small-town fortune-seeker who travels by train through different stations, trying to find “clients” and make a ruble.

Goldwaser contributes several monologues he has already performed in his own productions, which are brought within the larger narrative of the play. This unifying task fell to Yassur, whose challenge was to make the piece more than just a series of readings, even though the actors have their scripts onstage. Yasur managed this by means of the mise-en-scène, props, jokes, contact with the audience and, most of all, music.

Music, however, is perhaps the wrong word for it. Rather, Yassur uses a technique in which the clarinet, played by Slepovitch, participates as its own character in the drama. It inserts itself into the dialogue, sometimes in discontent, sometimes in pity, sometimes in reproach. It is even possible that the clarinet serves as a sort of internal voice, saying that not everything a person says is always what he’s thinking.

Still, putting Sholem Aleichem on stage is no simple matter. There is especially the danger of falling into tastelessness and theater clichés. Fortunately, with “Agentn,” that doesn’t happen.

In earlier years you used to meet people who were attached heart and soul to Yiddish culture. They would do anything in order to help talented writers, musicians, directors, theater troupes, and other creative people realize their projects. The question remains, has this type of bold person disappeared from the Yiddish horizon?

All the participants in “Agentn” are well known in the Yiddish theater world and each of them is a “wandering star,” going wherever they are able to perform. In “Agentn,” the four players came together in one ensemble, demonstrating considerable talent, even without great financial means. In their work it again becomes apparent that we have the artists to play on the Yiddish stage, if only the stage continues to exist.