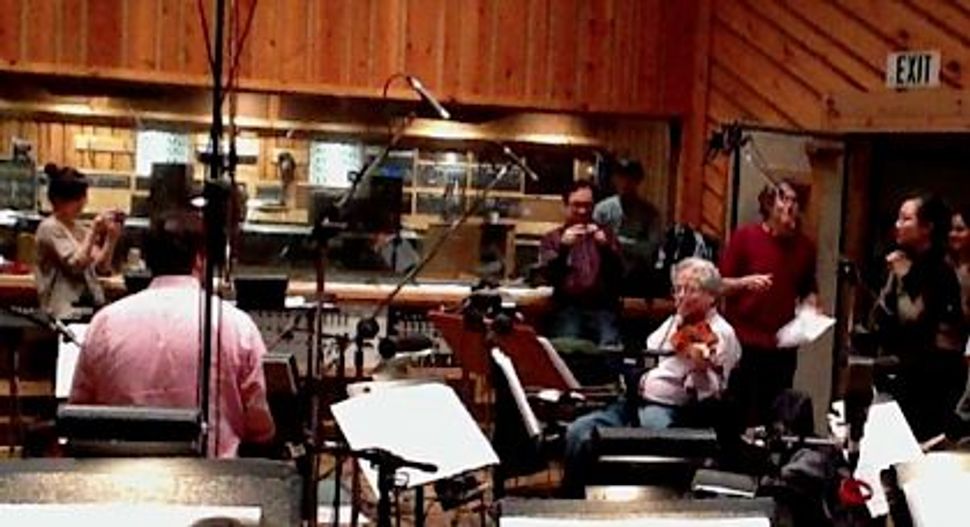 Itzhak spoke to Yitzchok in Hebrew. Hankus spoke to Yitzchok in Yiddish. The conductor made puns in English with a heavy Australian-South African accent. And this all happened in the recording studio where Bruce Springsteen recorded “Born to Run” and Madonna laid down her vocal tracks for “Like A Virgin.”

Fans will have to wait till next year for Sony Music to release the record, as well as for the accompanying tour. But after spending several hours in Avatar’s studio and control room, I suspect Jewish music lovers are in for a thrill. So far, there have been just two performances of this material, one during a menorah lighting ceremony at the White House last year and another at a theater in Los Angeles in March. The latter was “a juxtaposition of concert-hall dignity and mad populist exuberance” according to the L.A. Times.

Asked how the week of recording went, Netsky, who is serving as musical director and co-producer of the project, told the Arty Semite, “It’s beyond anyone’s expectations.”

Netsky, who teaches jazz at the New England Conservatory in Boston, Mass., has been on two klezmer tours with Perlman. But he says that unlike the great violinist’s forays into klezmer, this album, which is described as half cantorial, a quarter klezmer and a quarter Yiddish folk songs, is different, because Perlman is steeped in the cantorial tradition.

“He’s the one who has the big connection to opera and so he really understands hazanus as Jewish art music,” said Netsky. “That’s really the key, to understand that cantorial music is not only our artistic tradition, it’s our theatrical tradition.”

During a brief introduction to the writer working on the liner notes for the album, Netsky observed, “In my grandfather’s generation I don’t think there was a Jew who didn’t know these pieces. In our generation nobody knows these pieces.”

The repertoire of the Yiddish theatrical tradition is something Helfgot was unfamiliar with. The Israeli-born cantor is a Ger Hasid and Hasidim, for the most part, don’t know from Second Avenue. Netsky said that Helfgot had never heard of Abraham Goldfadn, the father of Yiddish theater, but when he threw in Goldfadn’s “Shofar Shel Moshiach” to the playlist, Helfgot loved it.

Helfgot’s tenor clearly wowed engineers in the Avatar control room. “He’s got this voice that just stuns people,” observed Ger, who met the cantor in 2005 when Helfgot was on tour in Australia.

The chamber orchestra assembled for the recording sessions seemed to be enjoying itself, on one occasion breaking in to what Netsky described as “a hilarious virtuosic duet” that Perlman does with Pinchas Zukerman. And the orchestra laughed at their teacher’s puns, some of which were followed by a rim shot courtesy of KCB’s Grant Smith. At one point Perlman requested “No more tuning,” then added: “As they say of the sandwich, we’re out of tuna.” Rim shot. “You don’t like that pun?” the violinist asked. “Let’s can it.”