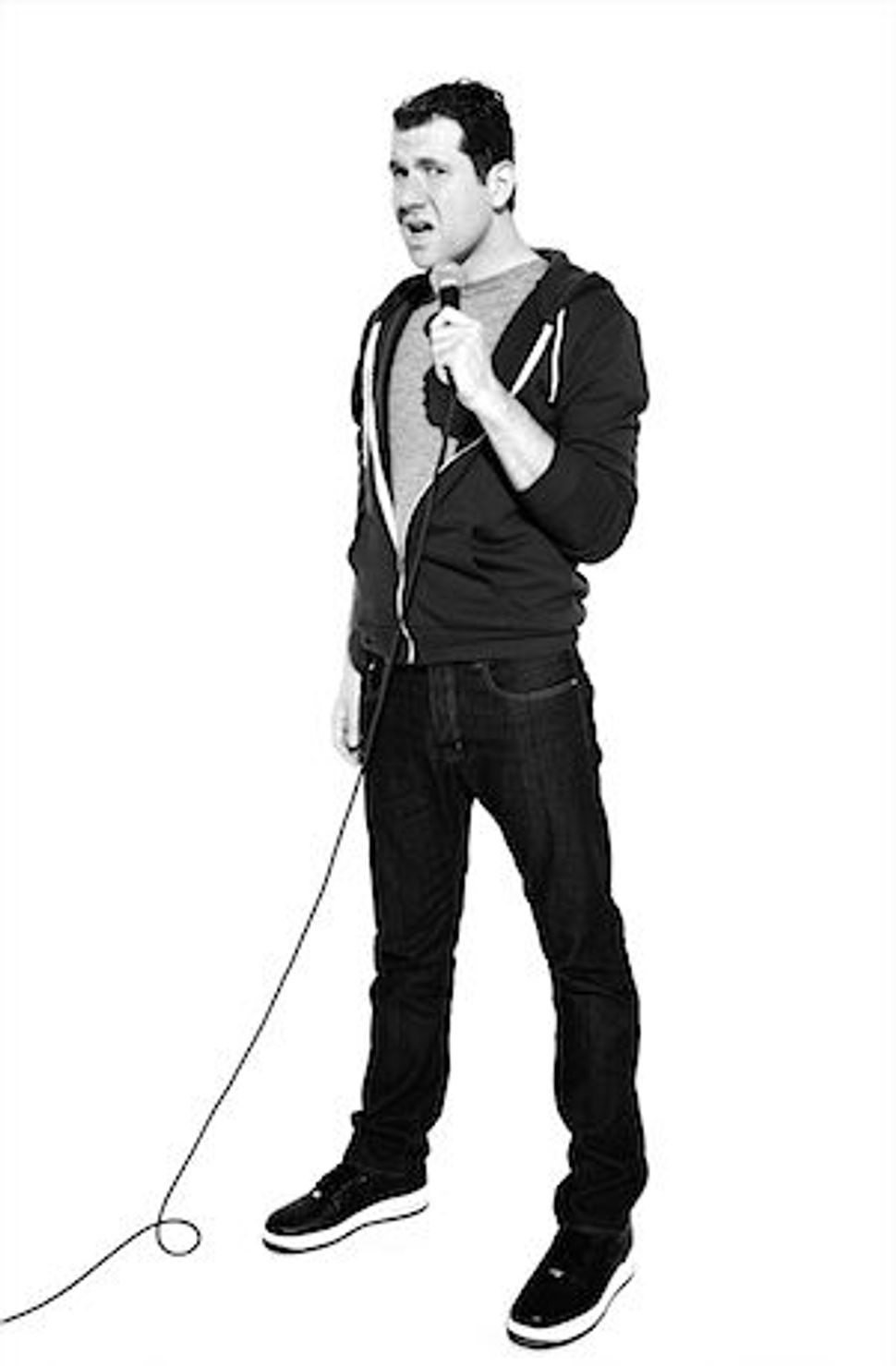 Image by Courtesy of Fuse

Billy Eichner is tall, gay, Jewish, from Queens, with a hairline somewhere between receding and disappearing. All of these qualities fuel his comedy. They also make the act of watching him run around the streets of New York, offering ordinary people $1 to answer questions like, “Who’s better, Meryl Streep or Glenn Close?” (and then erupting into a heated and irrational fury when the answer is Glenn Close “by far,” to which he yells back, neck veins bulging cartoonishly, “No, that is not the truth!”) one of the most exhilarating comic experiences there is. These moments, when Billy turns on his “contestant,” almost make you believe that the game show was invented just so Billy could savage it. You at least want to believe it.

Structurally, “Billy on the Street,” which just ended its second season on Fuse, is an ordinary game show: Billy asks trivia questions, and contestants win money for answering them correctly. There are obstacle courses for people to complete, lightning rounds and special games where you have to give a certain number of answers in a limited amount of time.

But structure is where the resemblances between this and any other game show end. The third round of the main trivia game, “Quizzed in the Face,” is entirely subjective. In order to win, the contestant has to share Billy’s opinion. Lightning rounds devolve into Billy frantically shouting shards of language. “Miss,” he stops a woman, “Judd Apatow?” Her face can barely contain her scornful indifference and he dashes down the street, his voice trailing “Judd Apatoooowwwww????” Or, in Tel Aviv, on his way to see Madonna open her world tour, the question, “Miss, do you love a gay dancer?” hangs in the air unanswered just long enough for Billy to run to the next person and then the next, shouting “Gay dancers! Gay dancers!” all while offering people around him his microphone to respond. No one seems to know whether or not to take “Gay dancers” as an ominous warning or as a joke.

And of course, there is Billy Eichner’s signature move: the way he rudely dismisses wrong answers and cheers on correct ones. The key to Billy Eichner’s comedy is this ability to channel sheer emotion, to give you the wonderful and scary intensity of an emotional response. When he’s happy, when a contestant gets the right answer, no one is happier. When he’s disgusted, when the contestant offers an inexplicably terrible opinion on pop-culture, no one is more disgusted.

In Jerusalem Billy tells a woman that she should see Madonna perform because she “puts on an amazing show.” The woman responds, “so do I,” and tells Billy, “I’m a concert violinist, I studied with… ” But Billy has already turned his back, saying “Oh Please, I don’t care.” Celebrating Madonna is the only thing that matters — the rest of us barely exist. On the other hand, when Sue-Ann answers the multiple-choice question “Kim Kardashian married a) a mixed-race person who really looks white; b) a basketball player; c) somebody with the same first name as her mother, or d) all of the above” correctly (that is, D), Billy explodes with joy. He jumps up-and-down. He shakes violently. For 10 captivating seconds she’s given raw, undiluted approval. Then he sends her away, curtly. Time to move on with the game.

As a tall, gay New Yorker from Queens, Billy is unafraid of confronting race. He’s comfortable in a multiethnic environment; he’s thrilled to talk to the different ethnic groups and demographics that make up New York. The difference in racial politics between Queens and the other boroughs likely even makes him more comfortable talking to other groups. (He told Jimmy Fallon that his fans are “young Black women and homosexuals”). He asks a black woman on the street to name two white celebrities, then gets disgusted when she answers “Jessica Alba.” He semi-calmly tells her, “I’m very upset that you like Jessica Alba because I don’t think that she’s a very talented person.” In another skit, he asks Rachel Dratch to name 20 White people in 30 seconds. Dratch convulses in laughter. She can barely compose herself. She can’t get over the premise. She needs to set ground rules, “Do we need to know who they are?” “Yes,” Billy explains semi-seriously, his answer growing increasingly deadpan as he realizes how ridiculous he sounds. “It would help if they were people we knew so that we could judge if they were really white or not.” Dratch loses the game. She cannot stop laughing long enough to name 20 white people.

If there is a Jewish quality to this humor, it’s the way that Billy’s racial humor winds, unwinds, and rewinds, turning in on itself until it becomes something fantastic and even disturbing, an uncomfortable echo of racism. Earlier this month, on an episode of “Late Night with Jimmy Fallon,” Billy played a modified version of “Quizzed in the Face” with Fallon. This wasn’t a remote segment; Billy started as an ordinary guest. But the moment Jimmy agreed to play, Billy went from being a guest on Fallon to controlling “Late Night.” It happened in a just-palpable second: a glimmer in his eyes, a crunching of the face, a suddenly higher pitch in his voice as he says, “Let me explain, Jimmy”: that gorgeous disgust was all there in the way he intoned “Jimmy.” It was now Billy’s show.

The two make their way to a question that Jimmy can’t answer: naming the real Coldplay song title out of a set of fake ones. Jimmy decides to use one of his lifelines. He decides to “Ask an Asian.” The idea of having one of the lifelines be “Ask an Asian” is itself genius, and we laugh at the insensitivity required to dream up the idea, but nothing prepares us for what happens when Billy and Jimmy run into the audience to find an Asian. They can’t find one! Twice they find someone who’s half-Asian, twice Billy refuses to let the half-Asian answer the question. The crowd’s energy and anxiety builds and builds, the expectation becomes delirious, and people point frantically at someone they think is an Asian. She is! And she gets the question right!

And that’s when it really hits us just how magical Billy Eichner’s racial comedy is. In 45 manic seconds he’s shown us how uncomfortably white Fallon’s audience is (there are African-Americans present, but very few); how easy it is to surround ourselves in mono-ethnic cultural enclaves; and, much more disturbingly, how easy it is to get people excited about naming someone’s race, how happy they are to point out that someone is Asian, how easy it still is not only to divide people racially, but to get people to participate in the division.

So Billy’s humor is partially the humor of persistent racial tension. During the Rachel Dratch skit, the one moment when Rachel was able to name a series of white people was when she started going through SNL cast members. “That’s ok,” Billy told her. “They count as white.” They do: the vast majority of cast members past or present. We laugh because this all still matters, and we know it will for quite some time.

There are so many more things to say about Billy Eichner. He is one of the most gifted physical comedians out there — the way he bends over to talk to children, his gangly run. He’s a brilliant voice actor, perfectly modulating the pitch of his voice to sell every line. And he is a remarkably talented writer. The questions and responses are immaculately phrased. In a game of “Would Drew Barrymore Like That?” Billy asked Will Ferrell to say whether or not Drew would like Mary Poppins. “Yes, she probably would like Mary Poppins.” Billy says he’s correct, then says — as only Billy Eichner can — “Drew Barrymore wouldn’t shut up about Mary Poppins — she’d probably describe her as ‘timeless,’” instantly turning the hypothetical situation into an all-too-concrete, endlessly-annoying response. Ferrell’s smile doesn’t go away.

There are more things to say about Billy Eichner, but it seems appropriate to end where we began: Billy Eichner is tall, gay, Jewish, from Queens, with a hairline somewhere between receding and disappearing. Somehow the combination of these things led to the funniest show on either television or the Internet.