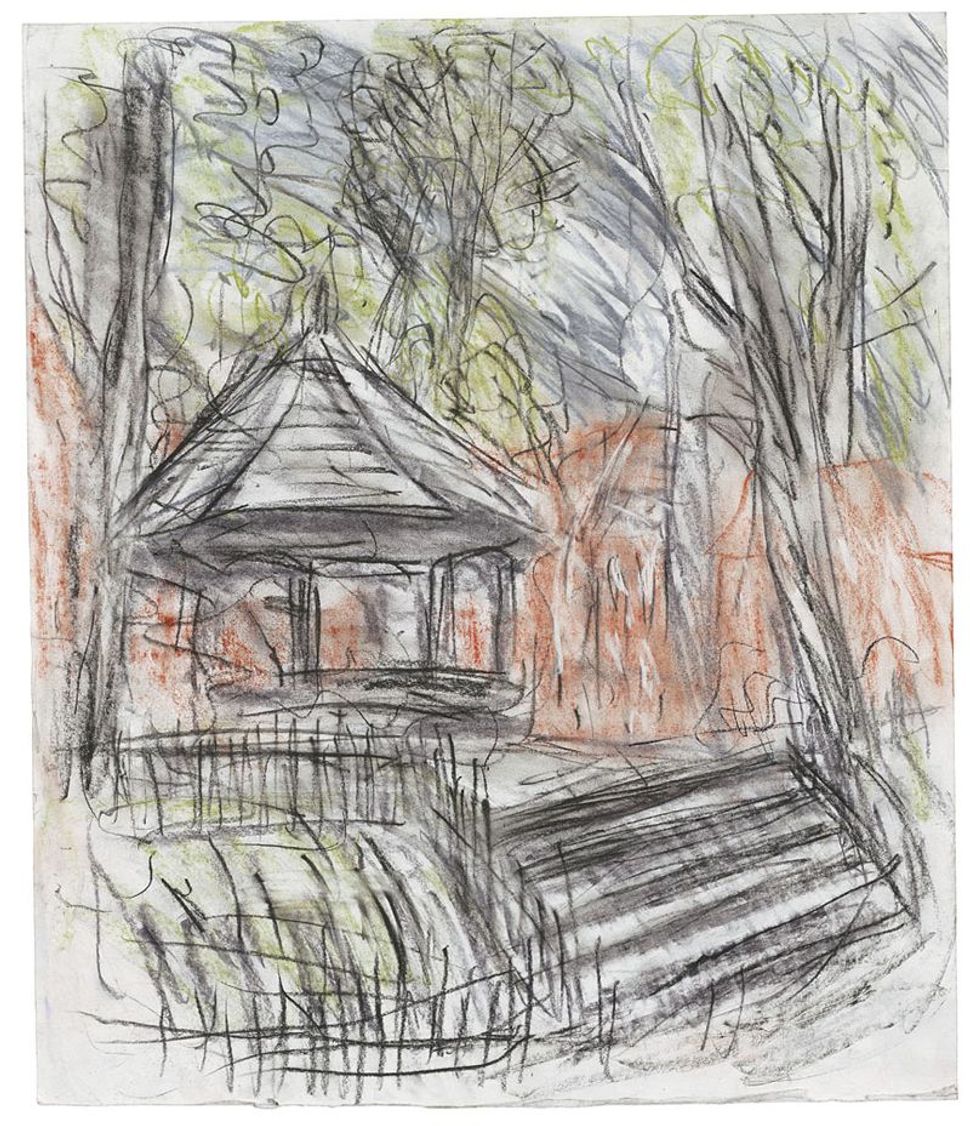 Kossoff’s current exhibition, “London Landscapes,” which opened in London May 8, includes over 90 drawings and 10 paintings in a retrospective that depicts the changing rhythm of the city’s urban landscape.

Apart from evacuation as a schoolboy and military service with the Royal Fusiliers between 1945 and 1948, 86-year-old Kossoff has lived all his life in the English capital. His work displays his observations of London — a lifelong subject — including the bomb sites of the early 1950s, the regeneration of Kings Cross and a recent return to Arnold Circus, in Shoreditch in the East End. That was where he was born to Yiddish speaking parents, and where he subsequently grew up.

Built in 1896, Arnold Circus was Britain’s first council housing estate, a Victorian social experiment. Today, red brick houses circle a bandstand and small park, much like they did then. The building where Kossoff attended school is still standing but the area, which formerly was occupied by immigrants, has now been gentrified.

Kossoff’s collection of frenetic charcoal and pastel drawings show the same subject from several angles at different times of day, through all four seasons. He began work on the series in the summer of 2008 and it was completed last year. This homage brilliantly captures the shifting light with Christ Church, Spitalfields towering in the distance. Trees lose their leaves, people and animals come and go and yet the central focus of the houses and bandstand is always there.

In addition to studying art at Saint Martin’s School of Art, together with Frank Auerbach, Kossoff attended twice-weekly evening classes between 1950 and 1952 with David Bomberg at Borough College, now London South Bank University and the site of a permanent gallery housing Bomberg’s work. It was during this time that Kossoff established his own studio.

Kossoff’s large oil paintings included in this exhibition exude energy and vitality, notably “Children’s Swimming Pool, autumn 1972.” He used to take his son swimming in the public baths in Willesden, a north London suburb to which he moved from the East End. The picture commands attention. It is illustrative of “life going on” with impasto layers portraying the pool as a place teeming with bodies and activity. It began as one of his swimming pool drawings — some of which are also exhibited here — and in 1987 he wrote that each mark in the drawing became an identifiable person in the painting, as with all his “crowd” works.

Railways, trains and tube stations, junctions and bridges all vie for Kossoff’s attention. People gradually unfold in “Outside Kilburn Underground Station 1984” and another vast oil painting, “Kings Cross, March Afternoon 1998,” shows London on the move. A crowd of people in the foreground, with St Pancras station looming behind, is a reminder of the period before its redevelopment; later drawings chart the beginnings of the area’s transformation. These are in stark contrast to some of Kossoff’s earlier work, which represent 1950s and ‘60s London as bleak dark cityscapes.

Known to be self-effacing, Kossoff is quoted as saying that he is “tremendously relieved” at seeing half a century of his work exhibited. He claims that he could never have imagined a show like it.

View a slideshow of works by Leon Kossoff: