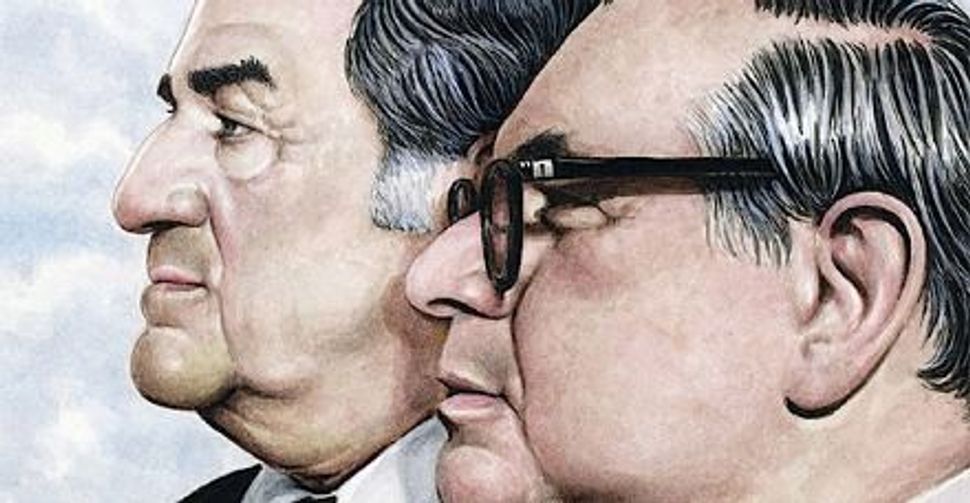 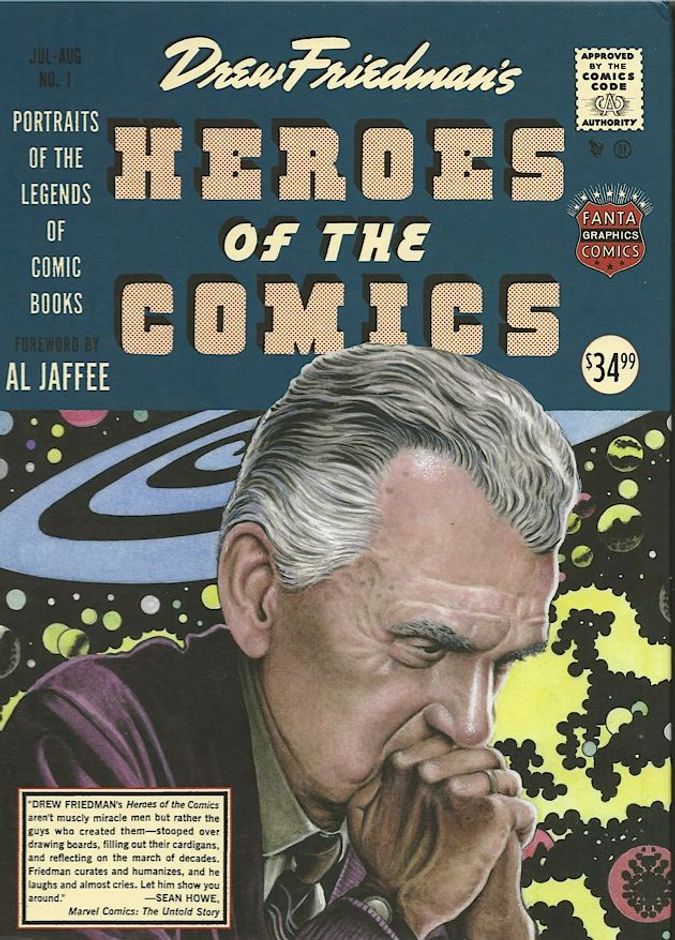 There is little argument regarding the fact that Superman, Captain America, and The Green Lama are comic book heroes. But if you thought muscle-bound, caped-crusaders who wear their underpants on the outside are the only heroes of the genre, you’d be flat out wrong. If you delve into Drew Friedman’s brilliant new book, “Heroes of the Comics,” you’ll find that the real heroes of the genre are the disheveled, ink-fingered nebbishes that created the amazing panoply of American superheroes and other comic figures.

Riding a continuing wave of popularity, the superheroes of Golden and Silver Age comics were created by artists and writers who, in reality, seem to have toiled in inky sweatshops. Portraying dozens of them in their rumpled glory, the formerly stipple-obsessed artist, Drew Friedman, reveals a cadre of of men (and three women) many of whom suffer from bad posture, pot-bellies and bubbling double chins. Also included are concise and informative biographies of each.

Bearing no resemblance whatsoever to their comic book progeny, Friedman’s Heroes are drawn in his trademark photorealistic style, warts and all. As a result, on offer among the more than 80 charming portraits are a broadly smiling Stan Lee with a hairpiece and liver spots, and a Carmine Infantino whose face is so creased it looks like a happy prune. Friedman, who evidently takes great joy in the drawing of older faces rich in character and lives lived, is the American Master of the Wrinkle, whether it be in skin or in gabardine.

All of this was on display October 8 at the posh digs of the Society of Illustrators, which organized a panel helmed by former Marvel editor and comics gadfly Danny Fingeroth; Columbia University’s bad-ass comics librarian, Karen Green, who was fresh from her own comics exhibit opening at Butler Library; Sean Howe, author of “Marvel Comics: The Untold Story”; the legendary creator of Mad Magazine’s, “Snappy Answers to Stupid Questions” and the “MAD Fold-in,” Al Jaffee, and featuring the artist himself, Drew Friedman.

Fingeroth guided the panel through the images in Friedman’s new book, as the artist explained some of the details and his relationship to some of his heroes. Friedman had the good fortune to grow up the son of author, playwright and screenwriter, Bruce Jay Friedman, who worked at Magazine Management, a multi-title company that owned Marvel Comics. A pre-pubescent Friedman discovered that by going to work with his father, he could avail himself of mountains of free comic books, a type of literature he couldn’t get enough of. More amazing, perhaps, was that his father’s desk was next to Marvel honcho Stan Lee’s, who even once said that Drew would work for Marvel, something that did transpire, though only for a week.

As Friedman described how his love of comics propelled him into that artistic netherworld, Al Jaffee regaled the audience with anecdotes about working with comics legends like Will Eisner, Shelley Mayer and Al Feldstein, among numerous others. Friedman also noted that his teachers at the School of Visual Arts included comics Old Masters such as Eisner and Harvey Kurtzman. An insider’s insider, Friedman’s love of the comics and its creators prompted him to create this marvelous homage to the genre’s founders.

Because the early comics industry was centered in New York City, it should come as no surprise that a majority of the industry’s writers and artists were Jews. As a result, there is way more than a minyan in “Heroes of the Comics.” From Max Gaines (Ginsburg) to Stan Lee (Lieber) to Mac Raboy (son of Yiddish author, Isaac Raboy) to Mort Drucker, the book’s table of contents reads like the back page of a UJA donation pamphlet. Hot off the publication of the third volume of “Old Jewish Comedians,” Friedman commented, “I finished the Jewish comedians book and said, ‘I’m done with the Jews,’ but somehow, I got sucked back in.”