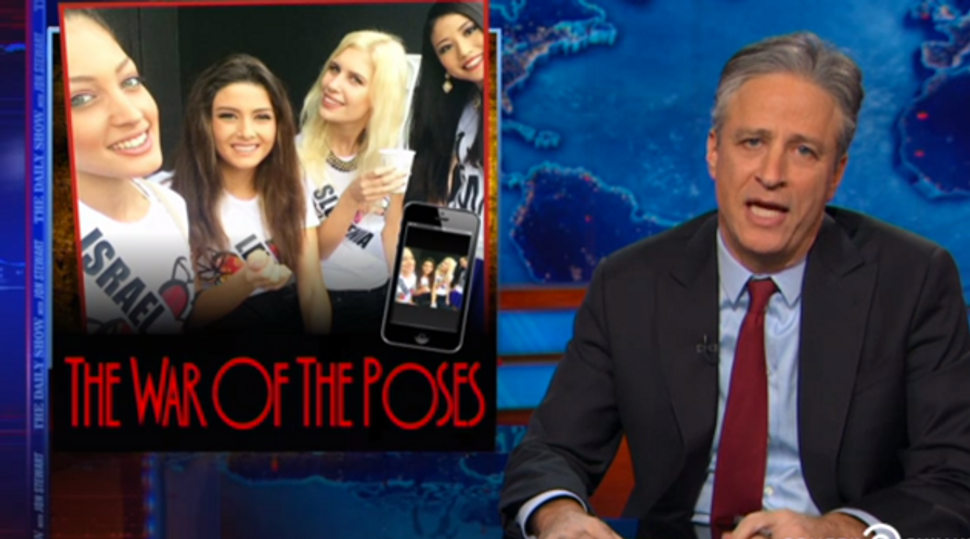 Once again, Jon Stewart showed us that he can take on anything, even the Miss Universe pageant, in a hilarious segment called “War of the Poses”.

The late-night comic opened his second segment in the show by talking about the other images that have been shaking the world. The images of Muhammad that caused the terrible events in France. The image of the march which upset some: “An ultra-orthodox newspaper “as God commanded” used photoshop to rid the event of women.”

Which brings Stewart to the segment, which he also dubs “What’s Upsetting the Middle East This Week?”

Jon seems confounded: “They’re not making out? I understand if there one where they’re making out… Is there?”

The news reel tells Jon that according to Lebanese media Israel and Lebanon are enemies and Jon responds with the obvious: “It’s a beauty pageant! They’re all enemies!”

As for Saly Greige’s claim that this was a photobomb Jon Stewart cries: “For the love of God, does everything that happens between countries in the Middle East have to be a bombing?!”

“And why not let Israel be, in the overall area of that picture she’s only taking a narrow strip! At the edge. I mean what do you want to do, push her back to 1967 photo borders?”

After an exasperated pause: “Let’s just hope a sensitive diplomat is on hand to diffuse the tension…”

“Grab your gas mask kids and head to the shelter, we’re going down. I can’t believe I’m saying this but maybe Kerry could handle this… Maybe we can get Billy Joel to sing ‘She’s Always a Woman’ or something…”

Still, Stewart lets News Reel Donald Trump have his say: “Well this is long standing hatred… You see it going on to something beautiful like what’s taking place in Miami and it certainly has an impact. It’s very sad.

“It breaks my heart to see these beautiful ladies fighting when they could be busy putting vaseline on their teeth or taping their swimsuits to their buttocks.” Stewart says, breaking out his best Trump imitation (ridiculous and extremely satisfying).

“However,” Jon concludes, “I don’t say it very often, but Donald Trump has a point. I get that Israel and Lebanon share an intractable enmity but c’mon, the Miss Universe pageant. It’s the one chance a year for all nations to put aside their differences, come together in Miami and treat women like expensive food instead of human beings.”