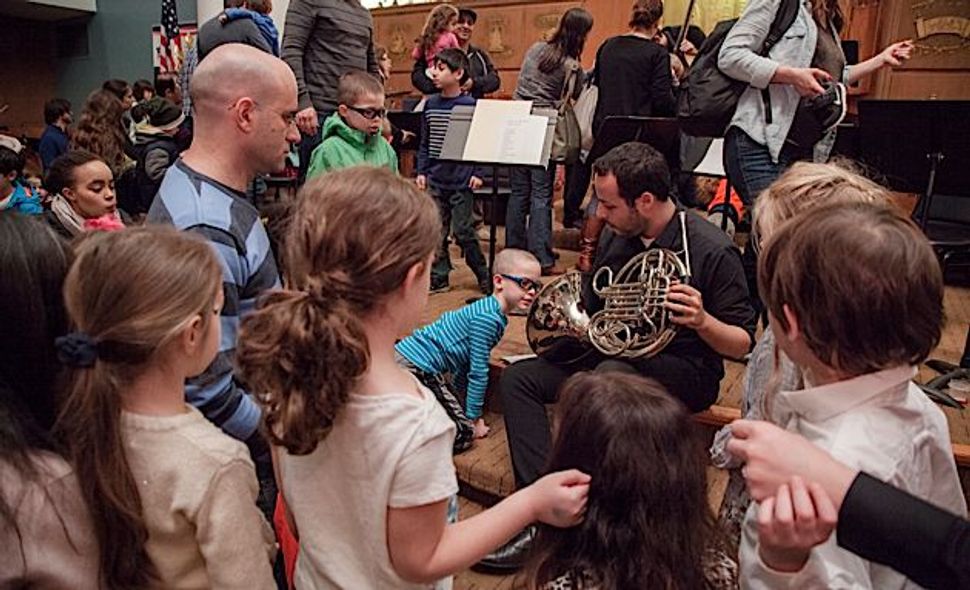 As the musicians began playing the first strains of Sergei Prokofiev’s classic children’s symphony, “Peter and the Wolf,” on the stage of the Steven Wise Free Synagogue in Manhattan on March 15, the hundreds of children in the large, awe-inspiring sanctuary stopped their squirming, and their parents eagerly pulled them onto the seats next to them. Israeli actress Shira Averbuch began narrating the familiar story of an enterprising little boy named Peter who, together with a duck, a cat and a bird, outsmarts a wolf. But this performance was different than most others in New York: the narration was all in Hebrew.

The show, called “Music Talks: Peter and the Wolf,” marked the opening of a remarkable two-week Hebrew festival called “Hagigah Ivrit” taking place in Manhattan until March 30. The festival, which hopes to raise the profile of the Hebrew language in North America through a variety of artistic and academic events, is sponsored by the Council for Hebrew Language and Culture in North America, the World Zionist Organization, The Steinhardt Foundation for Jewish Life, and the Israeli-American Council.

It was clear from the Hebrew chatter echoing through the hall both before and after the performance that almost all the families attending were Israeli expats grateful for an opportunity to share a Hebrew cultural experience with their children.

“This is all wonderful!” said Anna Grady, an American mother of two, holding her two-year old daughter in her arms as her Israeli husband, Ronen, leafed through children’s books downstairs after the concert. “When I heard there’s going to be a program featuring classical music, and in Hebrew too, I knew we had to come. And we’re always looking to buy Hebrew books for them, so this is a double bonus!”

Throughout the two weeks, Hagigah Ivrit is focusing simultaneously on two groups: Israeli-Americans and the American-Jewish community. Although the activities at Steven Wise following the concert, including the book fair, arts and crafts, storytime and a family musical production called “Festifun2” were clearly geared to Israeli-American families, other events during the week aim to attract American Jews who don’t know much Hebrew, like a free class for beginners; a kibbutz-style sing-along with Israeli beer, and exhibits of works by Israeli artists Joseph Bau and Barbara Wolff.

“We want people to feel inspired by modern Hebrew, to at least get a taste of it,” said Yehudit Feinstein, NY Regional Director, of the Israeli-American Council, which sponsored the day-long events at Steven Wise. “But we’re also hoping that this will engage the American-Israeli community and especially their children growing up here in the U.S., to connect them to the Hebrew language and the State of Israel.”

Other events are taking place at the JCC of Manhattan, Bnei Jeshurun and other venues around the upper west side of Manhattan.

“We want to show everyone that Hebrew is not under Israeli ownership,” Ravit Bar-Av, coordinator for the Council for Hebrew Langauge and Culture, told the Forverts. “Hebrew is the perfect way to connect the Jewish-American and Israeli-American communities because it has lots of faces — humor, inspirational and the language of Bible and prayer.”

It’s no accident that many of the activities are geared towards families of young children. Organizers of the festival say that American Jewish parents frequently bemoan the fact that their children don’t want to speak Hebrew because they associate it with Hebrew school or with bar-mitzvah lessons. “Parents are always asking us how can they get to see that Hebrew is fun, too?” Bar-Av said.

What’s interesting is that these concerns are coming even from Israeli parents who speak Hebrew at home. Their children are responding in English and expressing little interest in their own mother tongue.

Several years ago, the World Zionist Organization decided that something had to be done about the woeful state of spoken Hebrew in North America. In 2013 the organization invited 70 community leaders, teachers, scholars and writers, all of whom were involved in promoting Hebrew, for a conference in New Jersey to discuss how to inspire American Jews and their children to speak, read and write in Hebrew.

“We realized that a 2-week long collaboration drawing on local talent could have a major impact on the community, and the idea of a Hagigah Ivrit just took off,” Bar-Av said.

Although the festival could markedly increase the community’s interest in Hebrew language and culture, Bar-Av says much more needs to be done. “Students in Jewish day schools need more opportunities to speak Hebrew because the more you practice, the more you want to learn it. Teachers and administrators have to make it clear that learning to speak and write Hebrew is a priority.”