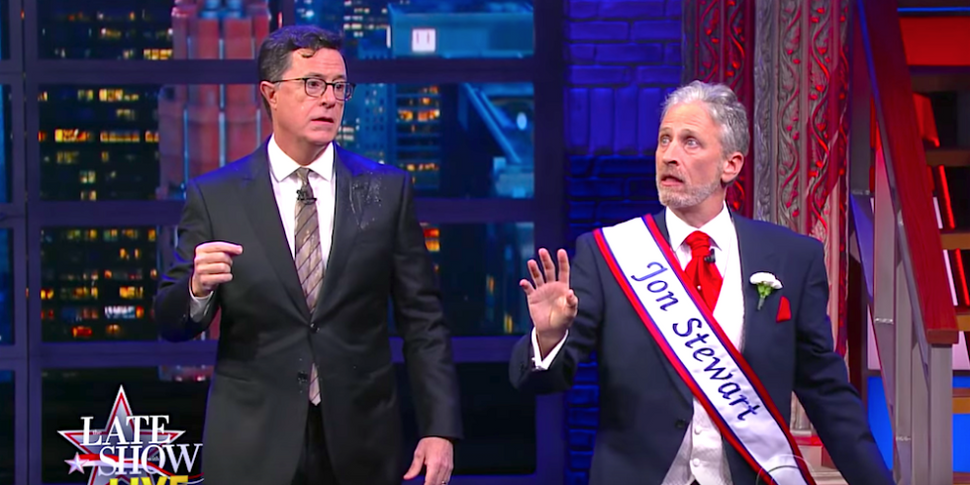 Will celebrity election videos ever get old?

Nope, I think not. Jon Stewart and Stephen Colbert just joined the ranks of Rachel Bloom’s amazing “HOLY SH*T! You’ve Got to Vote” video and Lena Dunham’s “Sensual Pantsuit Anthem,” with an epic ditty of their own.

This one involved a skit and musical number featuring the two comedians trying to explain the importance of voting to an undecided young girl.

“He’s running against Hillary Clinton,” she said. “Ugh. I can’t tell which one is worse.”

The girl then bemoaned the fact that neither of the candidates speak to her values and she’d rather sit out this election.

The two played momentarily stumped—and Stewart broke into a quick chorus of “Papa Can You Hear Me?” (“There’s always time for Yentl,” he said.)

Thankfully, Javier Muñoz from “Hamilton” arrived on the scene with some much-needed common sense.

“It’s a slap in your face when you erase your voice,” he rapped. “..Staying home is not a statement.”

Stewart concluded the musical number by yelling out just a few arguments against Donald Trump: “He’s endorsed by David Duke. His tiny hands might get a nuke.”

Watch the whole number in full below: