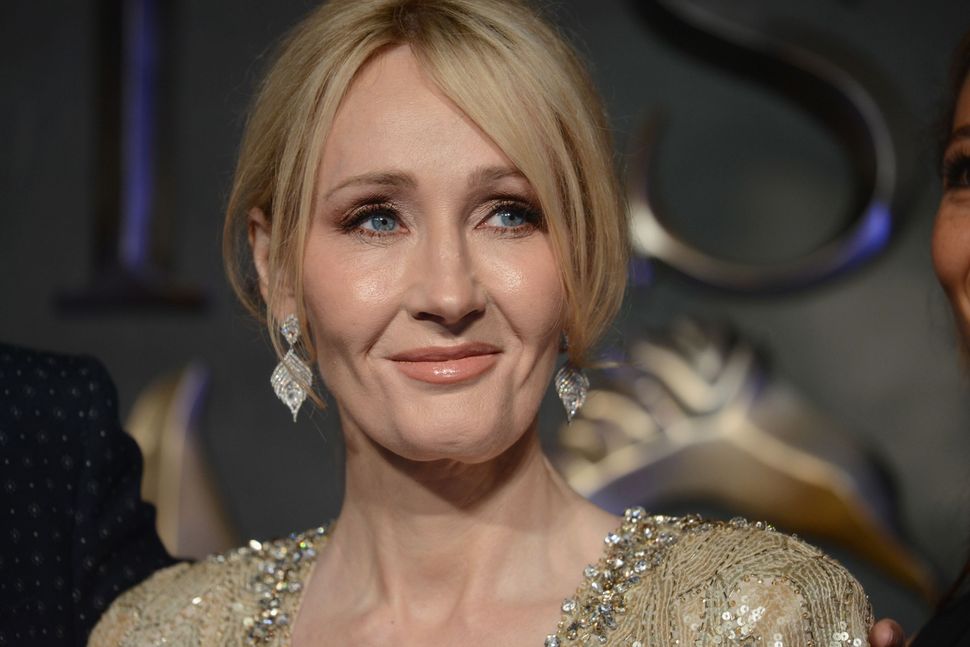 We are the people of her book. Image by Getty Images

20 years ago today, Americans were introduced to the boy who lived, in “Harry Potter and the Sorcerer’s Stone.” The world is overflowing with magic and joy and Potter-style resistance. While we wait on J.K. Rowling’s next work of witchcraft and wizardry, consider — would you read these books?

“Harry Potter And The .2% Of Earth’s Population That Really, Really Wanted To Be A Part Of It”

“Harry Potter, The Boy Who Lived And Perhaps Later Went On To Convert To Judaism For All We Know”

Jews love “Harry Potter”. We reference it in our summer camps, our sermons, and our relationships to tikkun olam. It helps some of us process the Holocaust. For others it feels like “Harry Potter” is a kind of Pirkei Avot—an ethical companion to the Torah.

But does “Harry Potter” love the Jews? The only overt references to religion in the seven book epic series consist of Harry and friends celebrating what seems like a fairly secular Christmas. While the series has weathered objections from some ultra-religious groups, the final novel features a sacrifice and then rising of the dead as a savior that seems like a pretty obvious Christ allegory.

Only once has Rowling given Jews any inkling that Hogwarts makes room for Hashem. In a tweet that seems as likely to one day be canonized as the 6th book of the Torah as anything else, Rowling identified a minor character, Ravenclaw wizard Anthony Goldstein, as the sole Jewish character in the book series.

1.Let’s start with the obvious. The Forward has investigated the “Harry Potter” books’ connection to Judaism so thoroughly we know it like the makers of The Marauder’s Map knew Hogwarts. Our “5 Quintessentially Jewish Concepts In Harry Potter”, reflection on Harry Potter at 20, and analysis of major Jewish influences in the HP spinoff movie series go above and beyond like a Hermione Granger Arithmancy essay.

2.I’ve said it before and I’ll say it again—Jews didn’t adapt, survive, wander around the globe, and scramble past endless stumbling blocks to where we are today to not have a podcast where a Jewish, atheist granddaughter of four Auschwitz survivors and her colleagues read “Harry Potter” as they would a bible. Vanessa Zoltan and company’s “Harry Potter and The Sacred Texts” is the (aspiring) 199 episode-long podcast you didn’t know you needed.

3.This delightfully bizarro vignette from “Time” follows an American who made Aliya and now wanders Israel announcing, “Almost anything you need to know about Jews, you can learn from Harry Potter.” The (offensive! inaccurate!) bummer here is that, according to Adam, being a Reform Jew makes you a “mudblood”. The great news is that this article also quotes a Hassidic, Israeli Rabbi sheepishly admitting in spite of himself that, “Harry Potter is fiction.” Magical.

4.One of the noblest attempts of Jews to add “Harry Potter” to our liturgy is Moshe Rosenberg and Aviva Shur’s “The (Unofficial) Harry Potter Haggadah”, which offers “the ultimate lesson: Holiness can be found everywhere, if you know where to look”.

5.This “Vulture” article, “A Talmudic Reading of Michiko’s Harry Potter Review”, in which the former New York Times head book-critic Michiko Kakutani’s early review of the final “Harry Potter” is analyzed at a quasi-rabbinic level, offers definitive proof that Jews control the media and are using our power for good.

6.Everyone from The New Yorker to Aish lost their mandelbrot over J.K. Rowling’s admission that there were Jews at Hogwarts, and no one more than the Jews of Twitter. Despite the fact that three hours later Rowling also said that there might be jedi masters at Hogwarts (classic Balfour Declaration/White Paper switcheroo) Jews still took off, seeker-style, with this info.

Isn’t it weird that hogwarts students get Christmas and Easter off? Does Anthony Goldstein get the high holy days off?

Happy Chanukah: @jk_rowling has confirmed that Anthony Goldstein, Ravenclaw, is a Jewish wizard… No comment on halacha re magic & Shabbat.

Did we really need “confirmation” that Anthony Goldstein was Jewish in Harry Potter? His name said as much as Anthony Jewjew!

7.Rowling’s Goldstein tweet also spawned a mini web series, “Anthony Goldstein, Ravenclaw, Jewish Wizard”, in which Goldstein muses in letters to his bubbe in two minute episodes. Here’s how he describes the Hogwarts houses to her:

I think our people know a bit more about bravery than some of these [Gryffindors]—we didn’t walk around in the desert for 40 years to get overshadowed if you know what I’m saying. Slytherins seem very obsessed with purity of the race and keeping the bloodline clean. This feels familiar — not sure why. Then there’s Ravenclaw—they’re the smartest students at Hogwarts. You better believe your grandson Anthony is a fully-fledged Ravenclaw, confirming what you’ve always said—I’ve got the face of a smart person!

8.Anyone else whose childhood was ended slightly ahead of schedule by a book like “Number The Stars” or a children’s illustrated Anne Frank’s diary knows there’s nothing like a kiddie-Holocaust novel to engrain children with an acute terror of fascism and genocide that will haunt them for the rest of their lives. Does J.K. Rowling accomplish this in Harry P? Yes and more, says Vanessa Zoltan, venerable fan sites, and ole’ J.K. herself. The writer said that she didn’t want “Harry Potter” to be an exact allegory for the Holocaust, but that there are “quite consciously overtones of Nazi Germany” in the book.

9.At last we have arrived at one of my favorite parts of the internet — atheist Jew Christopher Hitchens’ review of the final “Harry Potter” book. Why the “New York Times” had Hitchens review a book that he clearly loathes is a delightful mystery.

Hitchens starts with a reference to Stalin and Hitler and goes from there. He decries a “phenomenon” around the series that he cannot quite understand (it’s joy), he complains that the book doesn’t contain enough sex scenes, he uses the word “manichean”, he says that over the course of the series the storytelling “loses its ability to compel”, he praises Neville Longbottom, and exactly 1,903 words in, he suggests that readers put down the book and go find something written by Phillip Pullman. Hitchens, who wrote “God Is Not Great: Religion Poisons Everything”, does not forget to mention religion, calling Harry and Hermione’s ignorance of the bible “appalling” and then citing religion to explain why Harry’s ultimate triumph is “tedious”. He too compares the political environment of the book to Nazi Germany.

In short, there is a lot to love here. Specifically, one-thousand, nine-hundred, and fifty-six words.

10.You may or may not like J.K. Rowling’s “Harry Potter” spinoff movie series, which began with “Fantastic Beasts And Where To Find Them” last November, but the main characters, Tina and Porpentina Goldstein seem to be not only Jewish but also the ancestors of Anthony Goldstein. Essentially, Rowling seems to be writing a five-part backstory for our Jewish wizard, Anthony Goldstein.

And for now, all is well.