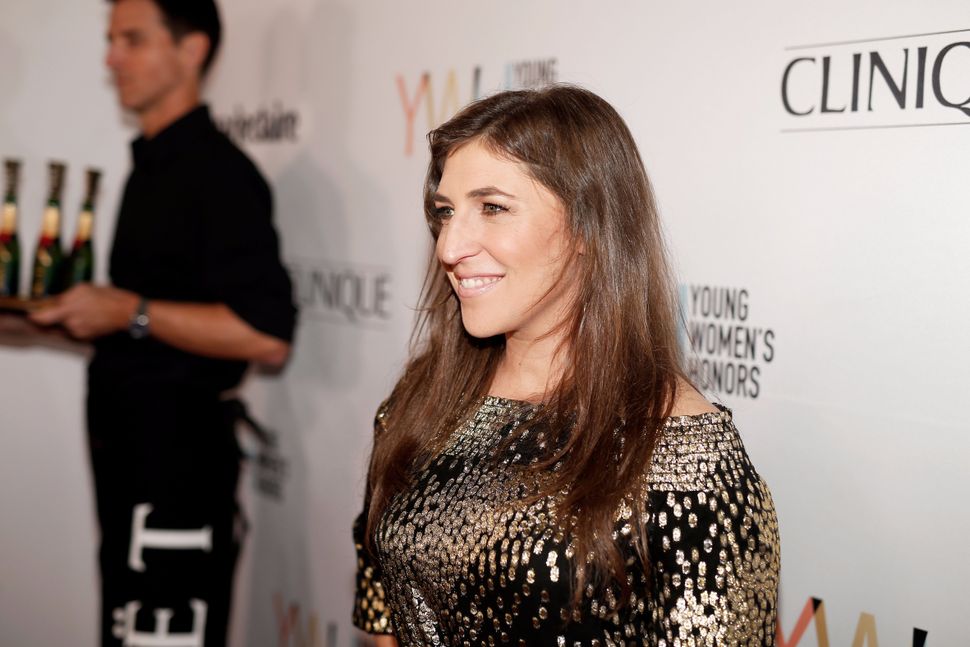 Here at the Schmooze, the Forward’s pop-culture desk, our love affair with Mayim Bialik is an open secret. A child-star neuroscientist with a name out of a Sholem Aleichem story, whose lifestyle brand combines the best in feminism and Judaism? Surely this woman was sent by the Divine to be our blog-y bashert.

It was tempting to wait out the media storm surrounding Bialik’s recent op-ed on sexual harassment in The New York Times and return to our regularly scheduled Mayim coverage next time she gifts us with a video of her chanting blessings over vegan challah or sternly explaining the gender pay gap. But as we hope to continue to look to her as one sterling example of how to lead a Jewish life, we would be remiss if we didn’t say that, as some of Bialim’s biggest fans, we found some of the points in her article hurtful and dangerous.

Mayim, so much of your article was true and beautiful. Your description of the way you were taught to hate your face and body as a little girl moved us to tears. It is clear that you endured so much pain as a result of an evil system that was designed to use you for male profit. So it is painful that the lesson you draw from that experience is not that that system should be dismantled, but rather that other casualties of the system deserve their punishments. Insane beauty ordinances designed by men robbed you of precious moments of your childhood that you say you “never recovered from.” The same forces robbed young actresses and models speaking out now. You should be fighting on the same side. Instead, your article slapped those women down and spread lies about them. You should apologize.

You say that many women misunderstood your message, but you are a strong writer and your message was clear — you drew a direct causation between augmenting one’s physical appearance and being sexually assaulted. Numerous times in your article you suggest that while women should have the right to present any way they want, they are well aware that doing so is unsafe and should expect to be assaulted if they try to attain conventional beauty.

You suggest that the women who reported having been raped and assaulted by Harvey Weinstein were “naive about the world we live in.” It is naive of you to assume that you haven’t been assaulted because of your appearance. Conventionally unattractive women are assaulted every day. This feels like something you could have discovered in a Google search or a single conversation with another woman.

The final sentences of your article were unbearably painful. They made me mourn the divide in feminism that sorts women into more or less deserving of safety and freedom. Surely this systematic dysfunction, like the system that allowed Harvey Weinstein to assault women for years with impunity, and the system that made you consider radical plastic surgery as a child, was built by men. Your very clear and direct suggestion that the women who were waylaid on the way to their dreams by powerful men chose to offer themselves up sexually in an attempt to be called “worthy of attention, respect and love” is a vile falsehood.

It seems like the way you have been treated by Hollywood is causing you to resent other women to the point that you begrudge them their safety.

We were saddened by your reflections on women’s responses to your article. You say that despite many taking your “words out of the context,” your message resonated with many women who understood your intention. Your message could have been received positively only by women who, like you, have avoided sexual assault by sheer luck and cling to the idea that they are holders of a secret method to female safety that they will hand down to their daughters one day, ensuring them safe passage through the world of men. But the surest method to female safety is all people joining together and rejecting rape culture with one voice. Currently, your words are working to drown out that voice.

We loved your video last month about preparing for the holiest days of the Jewish year, and we took to heart your wish for a year of “more tolerance and bravery.” It was so brave of you to publish an account of your survival in a system designed to use women. Now we ask for greater tolerance. You said today that you are “excited and motivated to be part of a larger conversation,” and added, “If this was not the way to do it in these 900 words, I do apologize for that.”