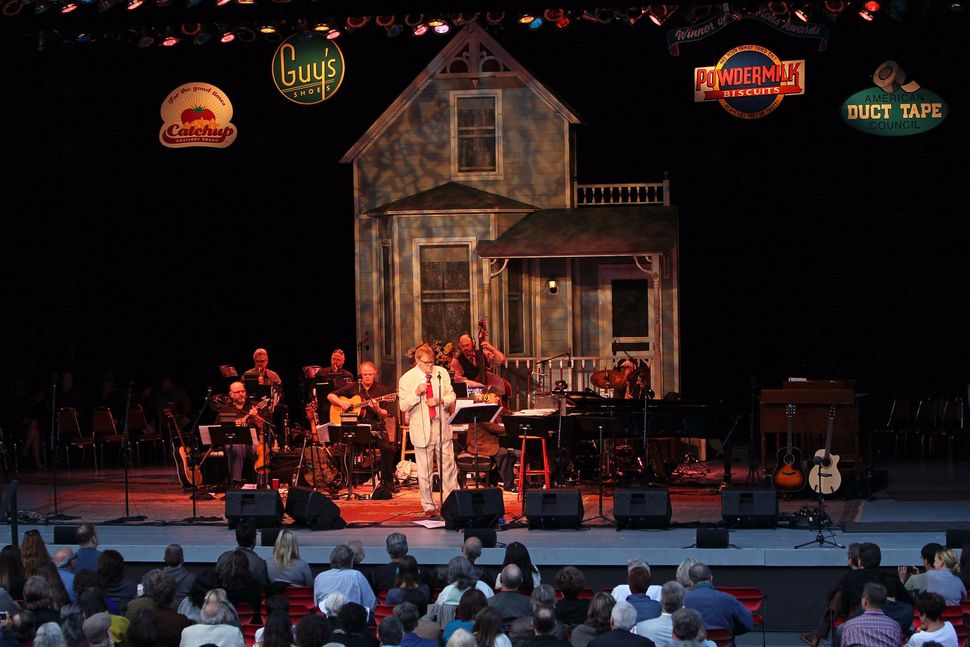 Powdermilk Biscuits will remain long, long after all of us are gone Image by Getty Images

Like so many people, I was born. My parents decided to have me, and take care of me, and buy me everything I wanted and needed. They changed my diapers, funded my education and invested in over a decade of orthodontia. They read all seven “Harry Potter” books out loud to me from start to finish and they attended every excruciating Suzuki-method violin recital I played.

And all they wanted to do in the few hours that remained in between their full-time jobs and raising three children was listen to Garrison Keillor’s “A Prairie Home Companion” once a week on National Public Radio.

Every Saturday after shabbat services, my parents and 2.6 million others listened to “A Prairie Home Companion” broadcast live from the Fitzgerald Theater in St. Paul, Minnesota, to more than 600 radio stations. Garrison Keillor, who hosted the radio variety show from 1974 until 2016, was a god to them. His melancholic voice had a soporific effect on them, like wholesome Klonopin or cannabis. Even though they are devout Jews who had spent the majority of their lives in major coastal cities, they recognized something essential and familiar in the tales of the people of Lake Wobegone.

And now their god is dead. On Tuesday, Keillor was fired from Minnesota Public Radio due to alleged “inappropriate behavior” in the workplace. My parents, along with millions of others including a surprising number of Jews, have lost their prairie home companion. They are adrift, companion-less, ears ringing with the no-longer soothing tones of a person who now stands accused of harassment. For these people, motivated through decades of good citizenship and hard work with the promise of handing the reins to Garrison Keillor for a few hours every week, this allegation is Cosby, C.K. and Franken combined.

Even though I have never understood a single joke on “A Prairie Home Companion” and have always considered it an irrelevant waste of time — in fact, one that somehow managed to make both storytelling and music boring by way of plodding episodes that lasted longer than Kol Nidre services — I recognize that it is important to my parents and an entire generation.

So when your parents are hearing the old piano in their hearts playing the “Tishomingo Blues,” here are a few things you can do to help them process The 5 Stages of Garrison Keillor Grief:

DENIAL
Sit your grieving parents down and gently explain to them that the phrase “witch hunt” means a searching out of people accused of witchcraft, and specifically connotes painful episodes in American history when (mostly) women were brutally murdered in the name of morality. So even though we don’t know exactly what happened with Keillor (very few details have been revealed,) it’s not really an appropriate term to use here. Ask your parents — can they remember any distinct female characters in “A Prairie Home Companion” stories? Was it perhaps just the breathy, hyper-sexual “floozy” character and the overbearing mother? Let them meditate on the answer.

ANGER
When your parents move into the “anger” phase of grief, don’t stop them. Allow them to throw their VHS copy of the “A Prairie Home Companion” movie on an open fire while screaming “LINDSAY LOHAN USED TO BE PURE TOO.” Remind them that Meryl Streep, who also starred in the 2006 “Prairie Home” film, looks like she’s going to sail to the end of her career without any major scandals.

BARGAINING
It is not advisable to let your parents set up a public radio-style pledge drive to raise money for Keillor’s cause, no matter how many canvas tote bags they may have to give away. If your parents try to negotiate with a higher power, like National Public Radio head of news Michael Oreskes, kindly remind them that he has also left his job due to sexual harassment allegations.

DEPRESSION
It is often said that funerals are for the living. In this case you can literally do a funeral for the living, by asking your parents if they would like to host a shiva minyan for Keillor. Jewish ritual practices mandate communal grieving to assure that mourners will be given ample support to share their memories. Host a service for your parents and their bereft friends to reminisce about their favorite Writer’s Almanac entries and say a prayer for the sound-effects artist. Serve a menu of “A Prairie Home Companion” foods — there should be buttermilk biscuits, hot coffee and ketchup. Gently note to the group that buttermilk is something that sounds wonderful, but usually turns out to be gross. Allow that to sink in while you serve rhubarb pie. If the shiva ends with guests eating ketchup while singing “Ketchup” while weeping, that’s okay too.

ACCEPTANCE
Consider introducing your parents to podcasts. They will love them.

Garrison Keillor had the looks of a dissipated Dwight Schrute and the voice of a god. And, while we will grapple with his painful legacy, it’s okay to remember the meaning his show brought into our parents’ lives. We can best honor that by doing what Keillor always said but our parents most often exemplified:

Be well, do good work, and keep in touch.