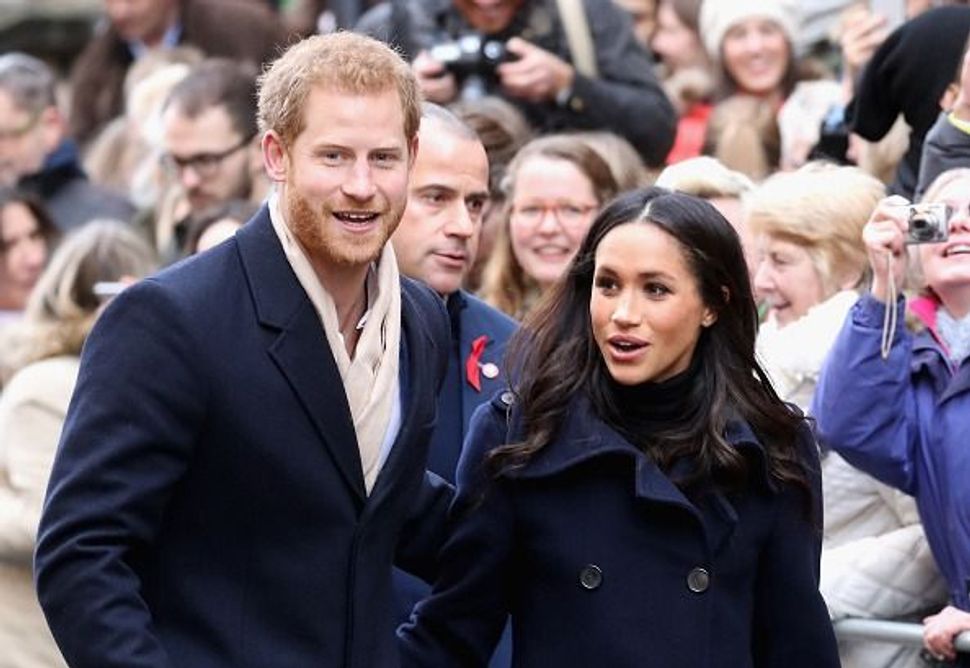 It’s 1:48 pm (EST) on Thursday and Meghan Markle has just arrived to a reception celebrating female empowerment wearing a black structured cocktail dress with an asymmetric slash collar paired with black heels. The shoes are clearly Aquazurra but news soon trickles in that the dress is from Black Halo.

Back in the Forward offices, writers scramble to find that elusive “Jewish connection.” After some aggressive googling, I think I’ve struck a goldmine.

Tonight Prince Harry and Ms. Meghan Markle attended a reception to celebrate female empowerment, which is being hosted by the Foreign Secretary, Boris Johnson. This event marks the launch of ‘Platform for Girls Education’, a campaign designed to encourage all Commonwealth countries to commit to providing 12 years of quality education for all girls. Prince Harry and Ms. Markle met guests from organisations who are supporting the aim to provide quality education to girls across the Commonwealth. #CHOGM2018 ?PA

“Get this,” I practically squeak. “The designer of Black Halo’s name is Laurel Berman. Berman is such a Jewish name, right? Like, there’s no way she’s not Jewish, right?”

“Well,” my editor looks up skeptically, “Just make sure we can confirm. After all, we are a serious news organization.”

“But look, even Wikipedia says Berman is derived from a Yiddish phrase!” I protest.

My editor is firm.

I sigh and spend the next two hours googling every mention of “Laurel Berman” on the Internet and thirty minutes trying to find a contact at the company. After unsuccessful googling, but managing to find said contact, I emailed the company my request. I prayed they didn’t find the question offensive. And waited.

It was soon time go home and still no response. Oh well.

Here at The Forward, we are tenacious news-gatherers, fearlessly pursuing scoops and coming under the line of fire for brilliant hot takes. But what makes our job tougher than most is our sincere dedication to making sure everything is viewed through one particular lens: Judaism.

But how do we know something or someone is Jewish? Well, err, we don’t. Not always. Like the aforementioned Meghan Markle story.

So here is a small sampling of stories we wanted to write, but whose Jewishness wasn’t quite ‘up to snuff’:

Is Beyoncé Jewish? Of course not. But Jews love her, so that should count. ‘Should’ being the operative word. It doesn’t. Not even a little bit. So when Beyoncé became the first black woman to headline Coachella and spent 2 hours dazzling the crowd with her brilliant outfit changes from Balmain designer Olivier Rousteing (all hail Queen Nefertiti-Yoncé), sparking rumors of a possible nail polish change (which was quickly debunked) and then launching a pop-up shop of merch inspired by her epic performance wardrobe, finding that elusive Jewish connection was an exercise in futility.

Which isn’t to say we didn’t try. There’s the Beyoncé-themed Passover Tumblr site which could have maybe, sort of, worked had Passover and Coachella fell out at the same time. We briefly thought we hit pay dirt when we found a report that claimed that Beyoncé is related to the great classical music composer, Gustav Mahler, who was born Jewish. But then we realized that the source was suspect: it came from the British tabloid, The Sun .

Then we looked at Olivier Rousteing, the designer behind the Beychella costumes. Well, he’s definitely not Jewish. Nor is any other designer from the house of Balmain, including its founder, Pierre Balmain. However, Pierre Balmain was a next-door neighbor to the very Jewish Gertrude Stein during and after World War 2 and they did typical neighborly things together, like visit each other and exchange produce.

For those of you who have been living under a rock, Vanderpump Rules is the best thing on television at the moment. No other show captures the totality of incestuous relationships, with all the scandal and drama and intrigue that goes along with it. The cast of characters are refreshingly un-self aware, committing the same crimes — lying, cheating, even getting arrested for stealing a really ugly pair of sunglasses — in a vicious cycle that is both horrifying yet deliciously satisfying. Also, the occasional happy thing happens to whet your appetite, like when Katie Maloney married her longtime boyfriend Tom Schwartz.

Katie has a beauty blog called Pucker & Pout. And unlike 99% of blogs, she managed to get herself an “on-brand” capsule collection with makeup brand Julie Hewett. The line launched last Monday, and includes a shade called “Pump,” which was inspired by the show that made Katie famous.

Is Katie Jewish? No. But her husband’s last name is “Schwartz,” which is the last name shared by half my Jewish high school class. But then again, his name is Tom, which is an extremely uncommon name for a Jew. Something to do with it being a name for a Christian saint.

Then there’s this tidbit from Quora which states that Schwartz is actually a German last name. Which might explain Tom’s love of beer on the show, but does it mean he’s not not Jewish? It’s hard to say.

Kardashians’ Clothing Boutique Empire Known As “Dash” Is No More

The Kardashians is probably the most famous family on the planet, but you know what they’re not famous for? Being Jewish, obvs. But they are pretty much darlings in the fashion industry, and they often dominate our niche news cycle so not reporting on them can be pretty annoying (especially because I have SO MUCH TO SAY).

In any case, the Kardashian sisters, specifically Kim, Khloe and Kourtney, got their start in fashion when they opened their first Dash store back in 2006 in Calabasas. As their fame grew, they opened two other locations in New York and Miami. There were plans to expand, but then things got in the way, namely real couture and high fashion designer friends and magazine covers and multi-million dollar games and beauty brands. Their cute little “suburban-y” boutique never stood a chance.

Which is why it comes as no surprise that Dash stores will be officially closing and become a relic of pop culture history as of May 31, when the lease on the stores in Miami and LA run out (the sisters closed the New York store a few years back).

The only Jewish connection is Kourtney’s baby-daddy, Scott Disick, who is Jewish. But he was never involved in Dash. Besides, despite sharing three children, Kourtney and Scott are no longer a couple. He does, however, still appear on the family’s reality show, Keeping Up With The Kardashians, so there’s that.