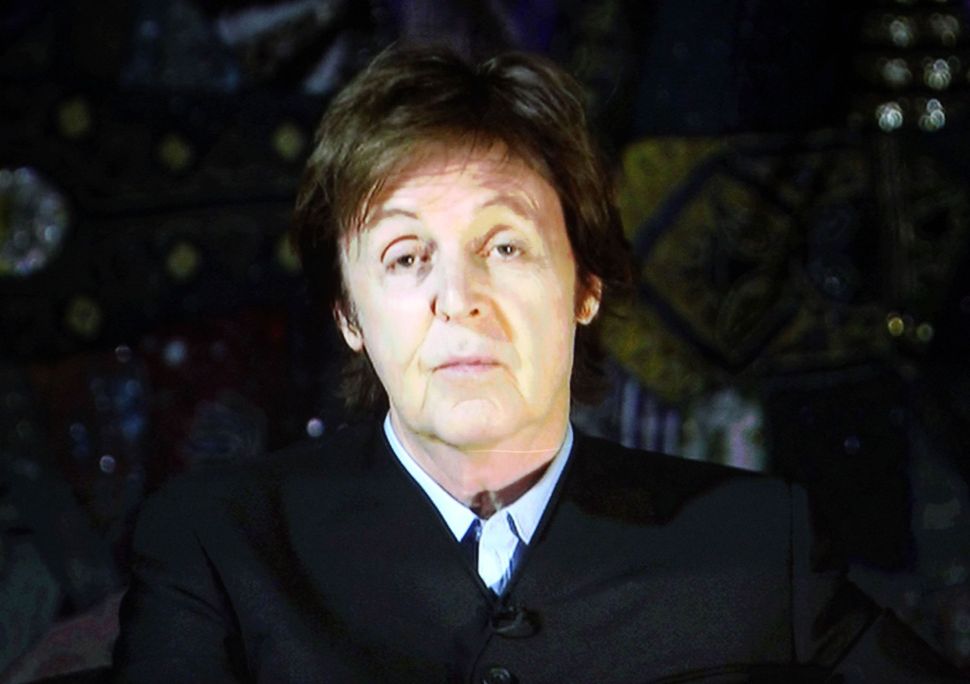 Paul is not amused, and neither am I. Image by Getty Images

On the tenth day of May, two thousand and eighteen years after the start of the Common Era, it was announced that Paul McCartney will not be flying to Israel to receive the Wolf Prize for music.

To help you handle this, the Forward has codified The 7 Stages of Grief many experience when learning that Paul McCartney will not fly to Israel to receive an award:

An excruciating, almost ecstatic despair courses through the body.

Feel like an electric shock victim who believes her childhood hero has taken up the mindset of emotionally repressed college sophomores whose greatest academic achievements are having read one page of Kant. The solemn tones of “Your Mother Should Know” ring in ears as I visualize every happy memory in my life falling swiftly into darkness, like Sauron’s ring fell into the heart of Mount Doom. Tears spring to eyes as whisper to self: “I wish my father had never lived to see this day.”

2.The Belief That Paul McCartney Is Taking Natalie Portman’s Lead

Normal sensory experiences are depleted. Life is but a pillar of smoke and a column of flame. The greatest living musical icon is taking a humanitarian stance based on the actions of a Jewish woman!

Both made tough choices that stem from a deep love of Israel and a rejection of the Netanyahu government! Both believe that the Jewish state can right its wrongs and are saying so with dignified and well-informed protest, which is not the same as boycott! The meek shall inherit the earth. The lions of rock and roll shall lie down with the lamb that is Natalie Portman, though she is more of a millionaire actress model than a lamb. We shall all be saved.

3.Reading Beyond The Headline And Into The Article, Seeing That McCartney Says He Is Not Going Because Of Schedule Conflicts And Sees Award As ‘Great Honor’

Flooding relief. Then, consider whether “schedule conflicts” is euphemism or just the reality of the very famous. Cycle in and out of reactions one and two.

4.Anger At Israel For Attempting To Lure The Mega-Famous With Promise of Awards, Instead Of Addressing Domestic Justice Problems

Why should Paul McCartney, the man who taught the world what it is to feel, take a 10-hour flight to a country where discriminating against black and brown people is part of a national security strategy, when he can stay in England where at least they have the decency to pretend to feel bad about it? Rapper Azealia Banks reported constant racial harassment while she was in Israel last week; is it possible that the beating heart of humanity (Paul McCartney) is standing in solidarity with her?

Plus, is the Wolf Prize even real? Or is it just a way of getting celebrities to do free publicity for Israel? I know, all countries do that! But Israel is the country I will personally flee to in the event of a second Holocaust and I want to hold it to the high, high standard of not coughing on people of color.

5.Guilt Over Criticizing Israel, Fear of Arousing The Ire Of Those Who Believe Israel Should Never Be Held To A Higher Ethical Standard Than North Korea

7.Excited For My Next Trip To Israel.