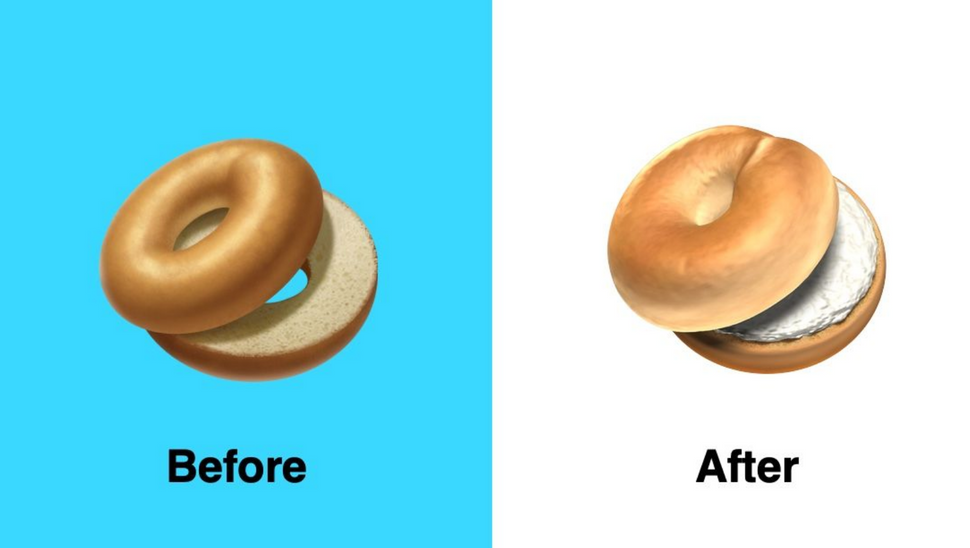 Power to the people. Sing it across the nation: faced with public hysteria, Apple has fixed the bagel emoji.

When the Unicode Consortium, the enigmatic organization of engineers that universalizes emojis, first debuted plans for the bagel emoji in February, the American public burst spontaneously into uproar — not least of all those pesky globalist, coastal elites in the media. Our bagel reporter, Aiden Pink, called instantaneously for the emoji’s ban. “If they wanted to create an emoji for ‘two hemorrhoid donut cushions balanced on each other,’ then they have succeeded,” he wrote at the time. When the emoji was finally released on October 8, Pink had to be taken out on a stretcher, and pinch-reporter Shira Feder called the emoji “trash.” She wrote: “The bagel we have been given is no bagel at all, but rather more of a circular cracker.”

After a biblical flood’s worth of internet carping (there was lox to complain about) and a petition by the Philadelphia cream cheese company, Apple released an improved bagel emoji on Monday, complete with an ivory schmear as thick as a down comforter on the beta version of iOS 12.1. The new image shows a more buxom, girthy bagel with an eggy sheen and a few endearing dimples. It’s a bagel you could grab a beer with.

The company’s response to the people’s plea resembles no less than God hearing the prayers of the Israelites in bondage. After a long night of revelry and toasting (bagels), Pink and Feder are undisposed to report on this triumph of political organizing. So it falls to this bagel-detesting, emoji-avoiding blogger to say mazal tov to one and all, and to quote the teachings of our fathers, Pirkei Avot, 3:21: “Im ein good bagel-emoji, ein Torah” — without a good bagel emoji, there can be no Torah.