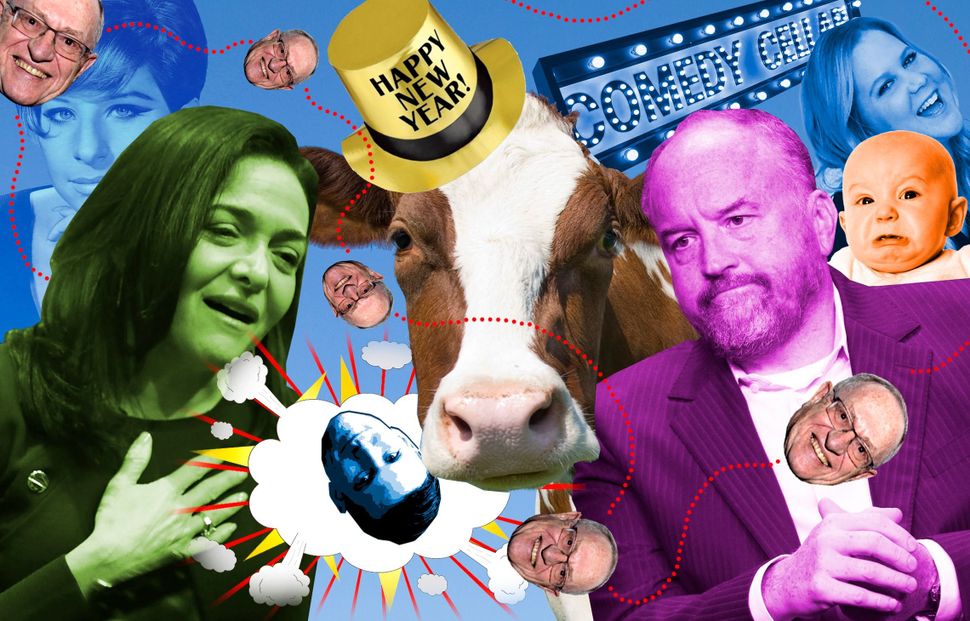 Wipe that perspiration off your brow: We’ve almost made it to 2019. But in today’s fast-paced news cycle, who knows what might have changed by the time you wake up on New Years Day? Maybe Gwyneth Paltrow will have thrown her hat in the ring for 2020 — the nation could really use some self-care. Maybe Pete Davidson will be hosting the Oscars. Maybe Andrew Garfield will have finally asked one of us out. (Andrew: We’re waiting.)

Ok, call us wishful. Or call us clairvoyant. We very much hope some of the following predictions come true; 2019 could afford to be a bit more fun than its predecessor. See you in the New Year.

1) Barbra Streisand, who in 2018 revealed that two of her three dogs are clones of her late dog Samantha, will announce that she also has two clones of her husband in an exclusive photoshoot with PEOPLE.

2) Louis CK will record a comeback special at the Comedy Cellar called “Milkin’ It,” then work with Matt Lauer to shop it to networks.

3) Sheryl Sandberg will try to resuscitate Facebook’s foundering reputation by introducing a technology that tags anything containing the word “Nazi” as sensitive. Richard Spencer is gone, but so is The United States Holocaust Memorial Museum.

4) After his infamous 2018 humiliation at Martha’s Vineyard, Alan Dershowitz will find himself unwelcome at Rosé Night on his annual springtime jaunt to Napa. And then Merlot night. By Sauvignon Blanc Sunday, he’ll be gone.

5) Amy Schumer will name her baby “Chlamydia.” It’s a joke, you guys! But… really, it’s nice. It’s a contemporary take on “Lydia.”

6) Unable to shake the feelings raised by his method acting as Marty Ginsburg in the 2018 Ruth Bader Ginsburg biopic “On the Basis of Sex,” Armie Hammer will leave his wife for RBG. She will not be interested — she’s holding out for Mahershala Ali.

7) Adam Levine will follow up his blandly pseudo-feminist 2018 hit with Maroon 5, “Girl Like You,” with “Girl Like #YouToo.” The clumsy gesture at solidarity against sexual assault will be derided on Twitter, and reign over the charts for at least three months.

8) Sarah Silverman, who has turned from a shock-comic into something like the country’s moral conscience, will complete her transformation by applying for Reconstructionist rabbinical school

9) Boca Raton has never let Alan Dershowitz down. They’ve gotta take him, right? Especially after the tax cut? Esther — Saul — Golda — don’t do him like this!

10) Sara Netanyahu will accidentally upload an Instagram video of herself saying “yes, I accept your bribe” to a shadowy associate. She will never face any public consequences.

11) Jack Antonoff will sing you — yes, you personally — a song that feels, like, really true to his soul. It’s so good to be vulnerable with someone who really gets him. How did he find you? Why is he barefoot? Could he please not sensually shush you when you say you prefer more of a rock n’ roll vibe? Don’t think too much — this has been, like, really great, but he’s not emotionally available right now. Anyway, if you ever want to do ayahuasca, hit him up.

12) Amanda Bynes will return to dominance, launching a successful fashion line. With the profits she will start a foundation to assist those who go “OTD” — no, not off the derech: Off The Disney Channel.

14) Alan Dershowitz will attempt to visit the balmy Virgin Islands. Who knew they could be so cold?

15) Ronan Farrow will publish an incisive investigation into his own debated paternity in The New Yorker, in the style of Gay Talese’s immortal profile “Frank Sinatra Has a Cold.” Does Frank Sinatra have a son? Or is Farrow really Woody Allen’s? Soon we’ll know. And Farrow will take home his second Pulitzer.

17) Having beaten cancer and won every conceivable award, Julia Louis-Dreyfus will have no choice but to devote herself to marrying her handsome sons off to young female writers at the Forward.

18) JK Rowling, vocal champion of British Jews, will reveal that Voldemort actually had Jewish roots. But he didn’t even HAVE a nose! So now you have to forgive her for that goblin thing.

19) Alan Dershowitz will arrive on Easter Island: Peace and quiet, at last. Wait — EVERY restaurant is full? But it’s the off-season!