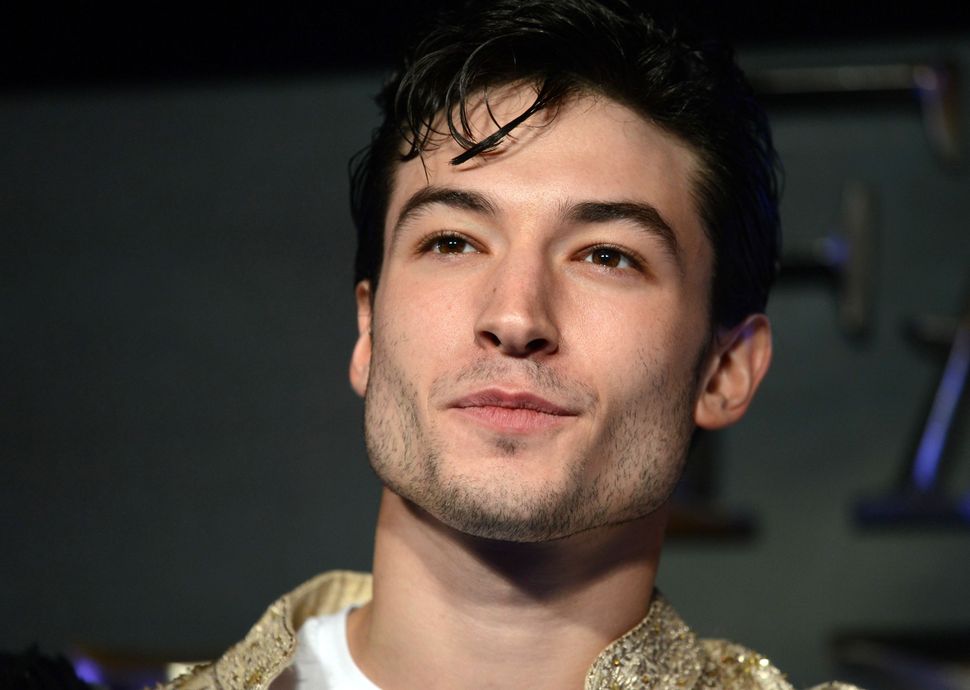 Ezra Miller, star of ‘The Mourner’ Image by Getty Images

Note: This article has been updated to reflect comments made by by the screenwriter.

In Japanese writer Arata Tendo’s novel “The Mourner,” a young man named Sakachiku Shizuto commits to traveling Japan, mourning for those who have no one else to mourn for them. The novel, which won the prestigious Japanese Naoki Prize in 2008, was adapted into a movie in Japan in 2015.

This summer, production will start on an English-language adaptation of “The Mourner.” Only, this time, Sakachiku Shizuto will be white.

Deadline announced on Tuesday that Ezra Miller, the 26-year-old Jewish actor and style icon, will star in the adaptation of “The Mourner,” produced by Echo Lake Entertainment along with Japanese producer and photographer Kazuaki Kiriya. The script will be adapted by Robin Shushan.

Ezra Miller, though often mistaken for Asian, is white. On Miller’s father’s side, the “Fantastic Beasts” actor is Ashkenazi Jewish, with roots in Russia and Germany. Miller’s mother’s family has Dutch and German roots.

“‘The Mourner’ follows a jaded and embittered homicide detective on the trail of murderous sex traffickers, who discovers new spiritual meaning in her life when she comes across a mystical young man (Miller) whose calling in life is to mourn the dead who have no one else to mourn them.”

It’s a description that leaves out that, at least in Tendo’s original, the story takes place in Japan and the protagonist’s name is Sakachiku Shizuto. Tendo’s novel rests on specifically Japanese themes — the prevalence of suicide in Japan, the predominantly Buddhist population, the culture around mourning and loss that is unique to the country.

Robin Shushan, who adapted “The Mourner” for American audiences, responded to this article stating that, “It’s an adaptation for an American film that will have a diverse cast. The great Ezra Miller was not cast to play a Japanese man.” Shushan added that the movie will be a “very loose” adaptation of Tendo’s story.

Miller, who you may also know from his star turns in “The Flash” and “Perks of Being A Wall Flower,” is a luminous performer and personality — the actor, who is gender non-binary, has been open about being proudly Jewish and proudly queer, and who has spoken out against the climate of sexual harassment specifically in Hollywood that precipitated the MeToo movement.

It’s surprising, both in terms of values and optics, that Miller would accept a role that can be so easily labeled as whitewashing. Scarlett Johansson, a celebrity of greater stature than Miller, still has not recovered from the backlash she received when she accepted a role in “Ghost In The Shell” of an Asian character, which originated in a Japanese manga.

The description of “The Mourner” released to the media so far omits any mention of Japan and all character names, and recasts the painful, mellifluous story as a thriller. The most likely explanation is that “The Mourner” is being re-written as an American story with a white protagonist (this is confirmed by screenwriter Robin Shushan, above.) It’s one thing to move the story to familiar terrain, but why are producers so adamant that an Asian protagonist cannot anchor a major movie? After all of the success of “Crazy Rich Asians,” why can’t Hollywood admit that Asian actors and Asian stories are bankable?

Other white actors who have played Asian characters in the past years include Emma Stone in “Aloha,” and Matt Damon in “Great Wall.” Both actors were hugely criticized, and both films bombed.

So the question remains — what the hell is Ezra Miller doing playing an Asian character?

Correction, February 7: An earlier version of this article stated that Matt Damon starred in “Doctor Strange.” In fact, he starred in “Great Wall.”