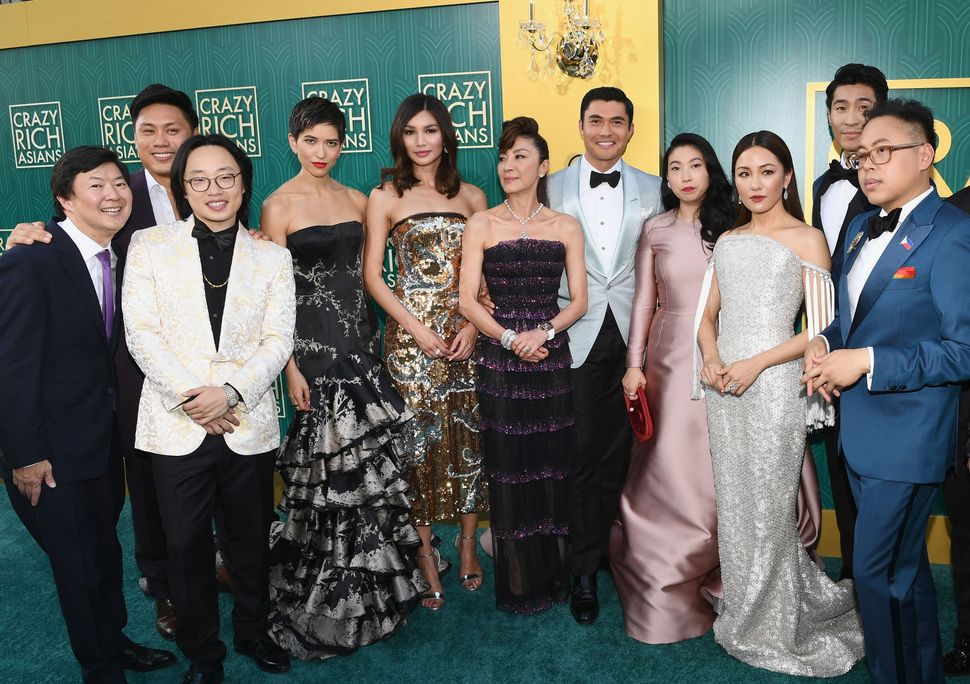 The cast of “Crazy Rich Asians” Image by Getty Images 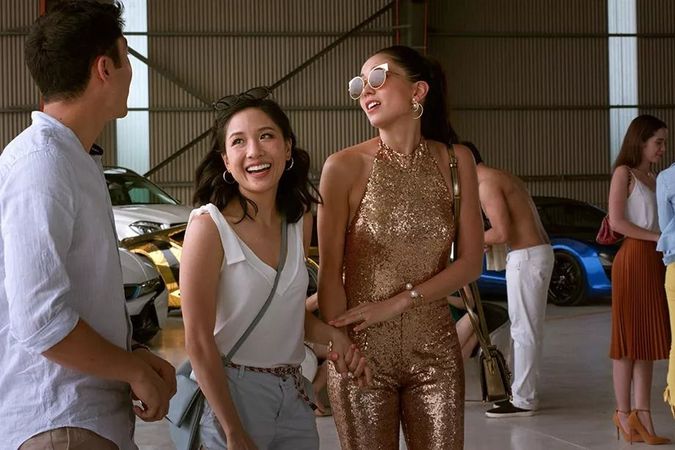 I was so excited to see “Crazy Rich Asians” — I’d waited a whole three years, since I read the book by the same name by Kevin Kwan. Asian Americans are excited too — and they’ve been waiting decades.

The movie is surprisingly phenomenal — a fairytale told at a clip, an extravagant confection of perfect faces and fashions enrobed in a stellar soundtrack, cut with shots of obscene real-estate, food, and Singaporean landscapes.

And we Jews — who have enjoyed so many opportunities to see our faces, foods, fashions, and stories represented on the big screen — have got to go see it.

Statistics about how shamefully underrepresented Asians are in American media are plentiful, but here’s a particularly painful one: USC’s Annenberg Report On Diversity in Entertainment in 2016 studied over 400 films and TV shows from 10 major media companies released between 2014 and 2015. The comprehensive study found that “at least half or more of all cinematic, television, or streaming stories fail to portray one speaking or named Asian or Asian American on screen.”

Imagine if that was us.

It’s hard to talk about Jewish privilege, hard even to decide if you think it exists. As a group we’ve suffered obscene oppression, ghettoization, expulsion, and genocide. Anti-Semitism fundamentally involves punishing Jews for being successful, leading dominant groups to reinforce stereotypes of Jewish success only to punish Jews again — “privilege” has so often been a double-edged sword for us, so no wonder accepting that we have some feels prickly. And for many of us, the word “privilege” is so evocative of self-righteous 20-year-olds that the very mention of it is nauseating.

But let’s be honest — in entertainment, Jews are overrepresented. “Seinfeld” gave way to “Curb” which now competes with “Broad City” whose fans love “Crazy Ex-Girlfriend” which shares airwaves with “The Goldbergs.” We’re not complaining — we love it. It feels like the American dream in action. Over here at the Forward’s pop-culture desk, we’re just trying to pick our jaws off the ground from witnessing the number of non-Jews willing to watch the Pfefferman family go through the Jewish calendar in “Transparent” in time for the second season of “The Marvelous Mrs. Maisel.” Not to mention movies — last night before “Crazy Rich Asians,” my theater showed a trailer for “Operation Finale,” the movie about the hunt for Adolf Eichmann — not the first Hollywood movie on that topic, by the way — a movie which comes on the heels of the “Drunk History” Eichmann reenactment, and will compete with another movie about an Israeli spy, Eli Cohen. And don’t get us started on the actors — we got Johansson, Portman, Kunis, Baron Cohen, Gadot, Franco, Rogen, and Sandler.

And we’re no fans of Woody Allen, but do you know who is? Most of America.

In America, Jews and Asians, specifically Ashkenazi Jewish Americans and Chinese Americans, have often existed in parallel — immigrating en masse to the country at different times, both groups built minority communities in metropolitan areas and experienced both discrimination and financial mobility. Both groups have been heralded as model minorities and are regularly compared to each other — sometimes seen as complimentary, sometimes in competition. On Christmas in America, Jews eat Chinese food. In college admissions, experts worry that Asian-Americans are enduring prejudice similar to what Jewish applicants faced for much of the 20th century.

Jews, a long, long-persecuted minority, should feel a special kinship to every other group that has ever been a persecuted minority. We were strangers in the land of Egypt, and we are obligated to show up for our fellow strangers — in their rallies, their restaurants, and their cinematic triumphs.

And we should particularly recognize that as the American minority that is most often compared to Asian communities yet has enjoyed privileges of media representation that Asian Americans have not, we should hand over some shekels for “Crazy Rich Asians.”

I mean — it’s two hours of watching gorgeous movie stars ride airplanes and traipse around in ballgowns — so it’s not exactly a hardship.

Indeed, “Crazy Rich Asians” is light fare, and that’s cause for celebration too. It’s not the responsibility of underrepresented minorities to make movies that are serious or educational. It’s not the responsibility of Asian culture to represent itself to America as humble. A single movie featuring an Asian cast is not obligated to represent the life experiences of 4.5 billion people, any more than “Don’t Mess With The Zohan” is meant to represent the world’s 14.5 million Jews.

And without the least discounting the existence of people who are both Jewish and Asian, Jews should deeply relate to the triumph of “Crazy Rich Asians” depicting Asian people not only as worthy, but also desirable. We, of all people, know how important that is.

Jewish men, specifically Ashkenazi Jewish men, have historically been culturally coded as ugly or lacking in masculinity. Our culture gently but shrewdly works to make sure that Ashkenazi Jewish men know that their features keep them in their place. For Asian men, it is immeasurably worse. Elizabeth Bruch, a professor of sociology at the University of Michigan, told the Atlantic that in online dating, Asian men are statistically the least desired. “Asian is coded as female,” she said, explaining that daters bizarrely connect entire races with particular genders. General “Asian-ness” is associated with femininity, leaving Asian men with little “market power” in dating. In “Crazy Rich Asians,” the male stars are stunningly beautiful. They are shot, dressed, and directed to be works of art. If there is any logic in the world, Henry Golding is now going to be a bankable movie star and public heartthrob. It can’t be denied how important that is for Asian-Americans who almost never see themselves represented as leading men.

And similarly to how Jewish — specifically Ashkenazi — women have been both sexually derided and over-sexualized both historically and in contemporary American culture, Asian women deal with a much more extreme sexualization and fetishization. But in “Crazy Rich Asians,” female Asian characters get to be everything — sexy, funny, smart, wealthy, cruel — portrayed with the same basic personal diversity white characters enjoy.

It’s not that there’s a competition for whether Jews or Asians endure more cultural prejudice — and certainly Asian Jews experience multiple prejudices — it’s that this is an opportunity to show up and inform movie studios that none of us will accept the idea that some ethnic groups are less attractive than others. Any opportunity to strike against white supremacy is a win for all minorities.

all my mexican homies we gotta go see and support Crazy Rich Asians cuz if the whites are letting the asians have a movie that means we can get one soon if it does well ????????