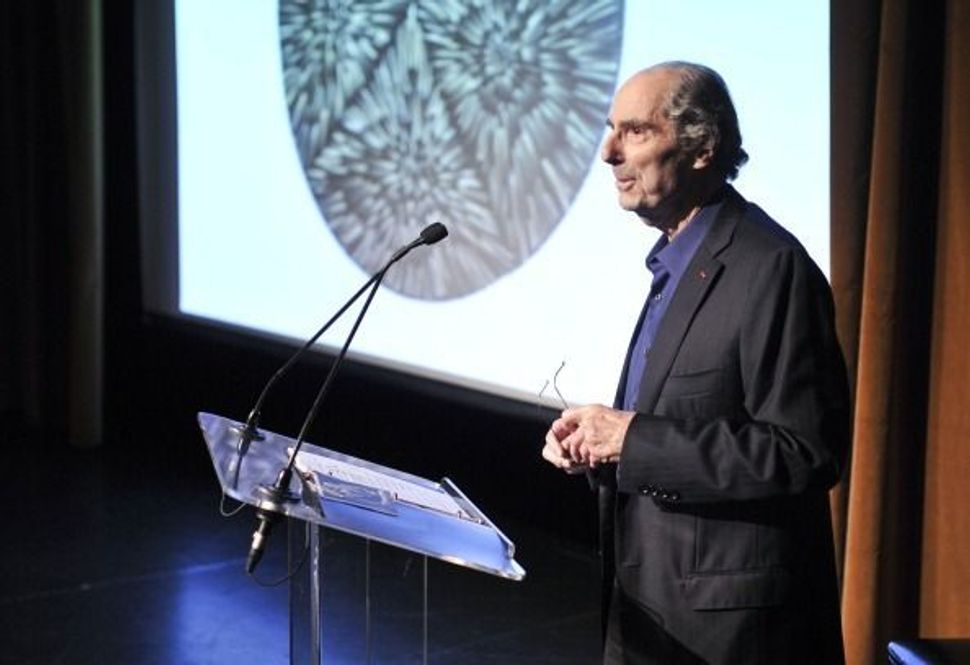 Author Philip Roth speaks at Yaddo’s New York City benefit at the Edison Ballroom on May 14, 2014. Image by Getty Images

Philip Roth will speak from the grave…in the form of a television mini-series about a rabbi, of course.

The late author’s 2004 novel “The Plot Against America” is being developed into a six-part miniseries from HBO, Deadline reported. Produced by frequent partners Ed Burns and David Simon, the work depicts an alternate version of American history (Charles Lindbergh becomes the President instead of FDR, transforming the country into a Fascist and anti-Semitic state) explored through the eyes of a working-class Jewish family residing in suburban New Jersey.

The production is currently filming in New Jersey, with one stop being the Temple Beth-El synagogue in Jersey City. The location holds significance for the Jewish producer Simon, as this was the same place where his father had his bar mitzvah in 1933.

First day of filming on HBO’s “Plot Against America” at Beth-El synagogue in Jersey City, where by notable coincidence, my father, Bernard Simon, was a bar mitzvah in 1933. PIctured: Two Hebrews and a Sicilian and of course, the Sicilian plays the learned rabbi. #ThePalermoGaon pic.twitter.com/DO01MGoZwJ

Simon also had gotten permission from Roth himself, saying that “the novel was in good hands” after visiting him shortly before his passing.

The television adaptation comes at a time when anti-Semitism is on the rise in the United States. As some argue the story holds uncanny parallels to today’s administration, Roth responded in an email to the New Yorker at the start of the Trump presidency that although he never intended the book to be a warning against the rise of figures like Trump, the president is “ignorant of government, of history, of science, of philosophy, of art” and “incapable of expressing or recognizing subtlety or nuance, destitute of all decency.”

Roth, most famously known for works such as “Goodbye Columbus” and “American Pastoral,” along with his depictions of New Jersey suburban life, passed away in May of last year.