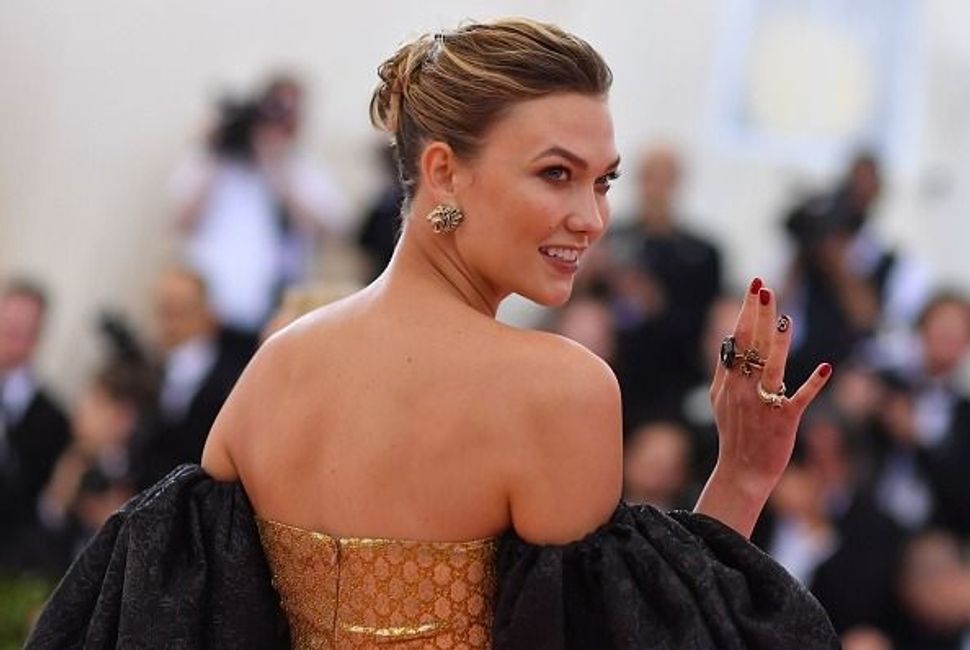 Karlie Kloss poses on the red carpet of the Met Gala on May 6, 2019. Image by Getty Images

By Adrianna Chaviva Freedman May 7, 2019

Glitz, glamour, fashion, people dressed like chandeliers — you name it, Monday night’s Met Gala had it.

Hosted by famed Vogue Editor-in-Chief Anna Wintour and some pretty famous co-chairs (including a certain One Directioner and Lady Gaga), this year’s chosen theme was based on Susan Sontag’s 1964 essay “Camp: Notes On Fashion.” Instead of the interpretation being some high-end outdoor wear (at least, that’s what my thoughts were when I first heard about this), the fashion was anything but that.

Someone better show up to Met Gala with a Jewish Summer Camp look or I will pass away ?

As Sontag wrote in her famous essay: “the essence of Camp is its love of the unnatural: of artifice and exaggeration.”

Well, the invited attendees definitely took that to heart, and Twitter had a lot to say about this.

The Jewish actor definitely took the gala’s concept to another level. His look was so out there that the Metropolitan Museum of Art cosigned it:

The Jewish actress — who happens to be Diana Ross’ daughter — wore a literal picture frame to the event.

She may have been inspired from a certain ’90s TV show:

Tracee Ellis Ross wearing a picture frame reminds of Monica and Rachel’s door in friends for some reason #MetGala2019 pic.twitter.com/4PLTSI2QrW

It was a mother/daughter date night for the famed star — and an unusual (and deserved) moment of good press for the much-maligned category “Jewish Mothers.”

I want a daughter just to have a mother/daughter night out like @BetteMidler. #MetaGala pic.twitter.com/C2NfXWWrY1

Ok … he’s a son of Winterfell, not a son of Israel. But as one Twitter user noted, we’d all like to “go on a shabbos walk” with this happy camper.

Fashion + irony = the millennial interpretation on Sontag’s theme that we craved.

Karlie Kloss
Okay. So maybe the recently converted model and newlywed didn’t exactly uphold to what Sontag possibly envisioned. She might have mistaken the Met Gala to be a chocolate factory:

Rachel Brosnahan
Technically, she’s not Jewish. But she does play America’s favorite Jewish comedian on “The Marvelous Mrs. Maisel,” and tsnius (Jewishly modest) fashion queens around the world are taking notes on this outfit:

Always tznius. Always aidel. Keeps putting her arm around me to include me in the campfire kumzits. “Come on, everyone, let’s clean the bunk and get to davening on time.” Wins Torah Trivia, bringing home the win for the Blue Team! #metcamp #jewishsummercamp pic.twitter.com/jDBmCkKJrs

Lizzo
The singer and emerging icon was so obsessed with her coat by Jewish designer Marc Jacobs that she wore it to the most glamorous place of all: the airport.

And for the best reaction of the night – Mayim Bialik:

Do yourself a favor and follow Jessica Russak-Hoffman’s Jewish camp Twitter thread on the gala (you can find her @HoffmanJess). It’s basically an Orthodox Jewish camper’s teen diary, and if it doesn’t re-traumatize you, it will definitely make you laugh.