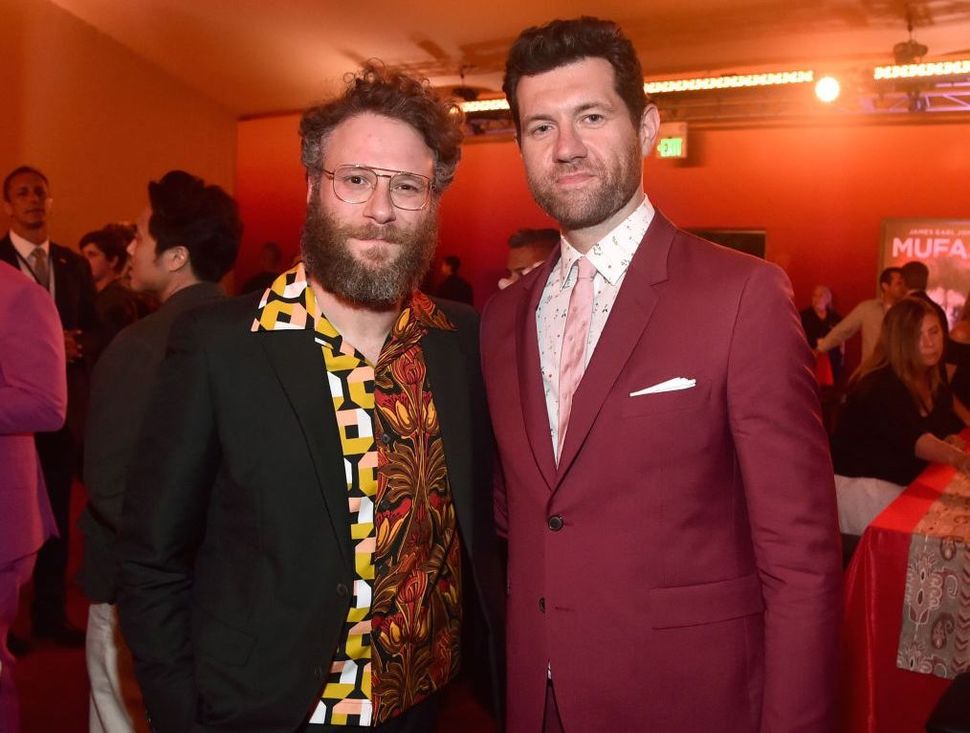 The benediction — “May you live in interesting times” — often feels like a curse. We’re certainly living in a time of seemingly limitless suffering, when the world is slowly becoming uninhabitable, and one in eight men think they could win a point against Serena Williams.

But we’re also living in a time when two Jewish men, one who rose to fame via smoking pot, the other by shouting at strangers, lean on each other in emotional support while meeting the black-American-divorcee British royal, all because of a cartoon movie about lions based on “Hamlet.”

Come on. The generation that watched a man on the moon dreamed of days like this.

Promotions for Disney’s live-action “The Lion King” took its voice-cast — including Beyonce, Donald Glover, Billy Eichner, Seth Rogen, and James Earl Jones — to London this weekend, where they were greeted by the Duke and Duchess of Sussex, Prince Harry and Meghan Markle. Like two celestial beams crossing paths, Markle and Beyonce’s meeting, understandably, drew the greatest notice. We exalt their new friendship.

But we would be remiss if we did not note what was happening just feet away from that historic meeting. Near two of the most studied women in the world, Billy Eichner stood waiting to be received by the Duke and Duchess, having a full-blown tizzy. In jerky footage that would have been passed over if not for the eagle-eye of a fan, Eichner turns manically to an off-camera Seth Rogen as Markle approaches, hissing uncontrollably.

“I’m gonna say — ‘Pleasure to meet you’ — is that bad?” Eichner, who provides the voice for “Lion King” character Timon, hisses to Rogen, who voices Pumba. “I’m gonna say it, I’m gonna say it,” he mumbles, nodding and twitching. Rogan, for his part, makes a hand gesture that suggests he would like the royals to hurry up. “I can’t even say it,” Eichner grunts. “I just!” And he falls silent, apparently contemplating his smallness in the face of Markle and the shadow of Beyonce.

Ah, to be humbled in the face of human excellence! To rely on the warmth of male kinship — of comitatus, as the Anglo-Saxon warriors had it — as we await the divine face of supreme females! Ah, to feel the rush of ages and ages of social anxiety, a blend of inherited trauma and a culture of politeness, that afflict the average multi-hyphenate Jewish celebrity as he meets, essentially, an American princess! We relate. And we are sure that for the Duke and Duchess, it was a pleasure to meet Billy, as well.